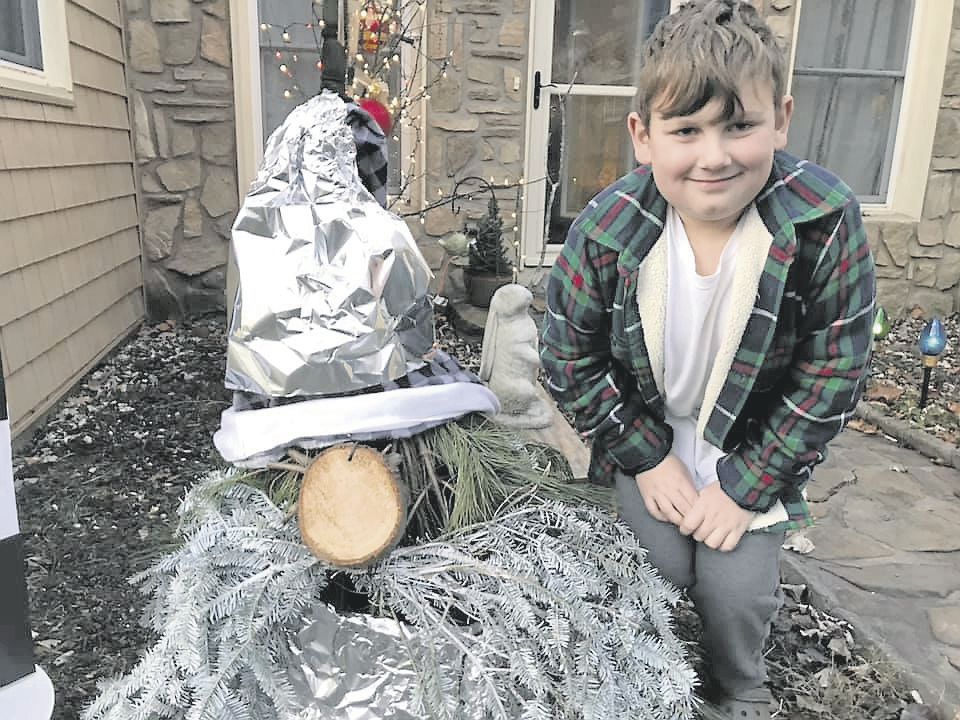 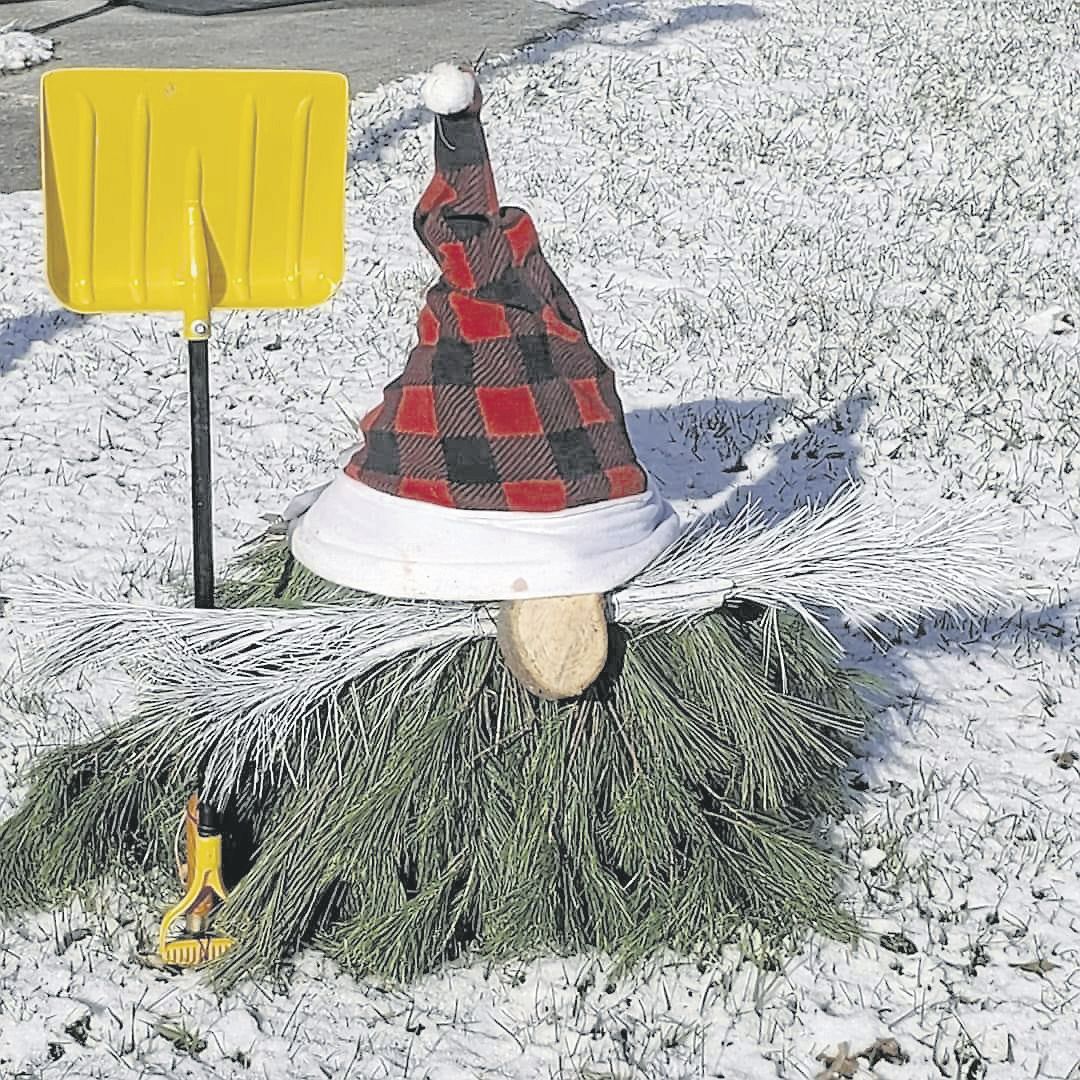 This gnome is ready for more snow. 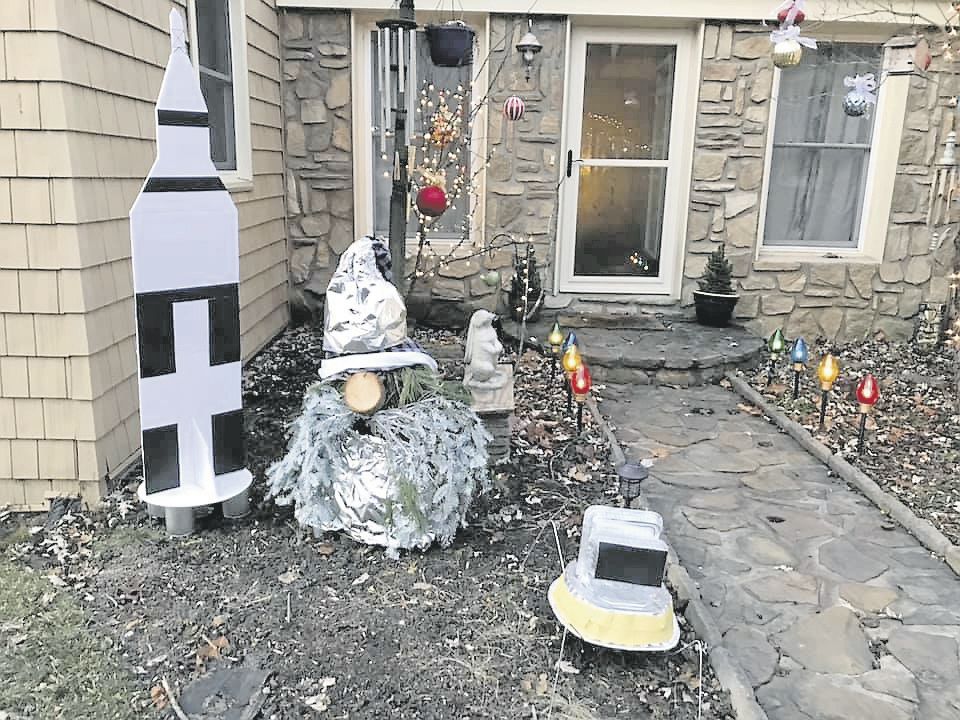 This gnome is ready for more snow.

A jolly group of festive gnomes are spreading holiday cheer throughout Wytheville, landing here, there and everywhere with their shaggy green coats, round noses, Santa hats and playful demeanors. They are here one day and gone the next as delighted residents sneak them onto the yards of friends and neighbors, who pass them on the next day.

“When I woke up this morning, it was out there,” she said, adding that the round-nosed imps are spreading joy and perhaps creating a new tradition in town.

“It’s just a bit of festiveness,” she said.

People are finding ways to personalize the gnomes, too. Fiorini’s eight-year-old son, Roman, loves space, so their gnome came with a makeshift Saturn V rocket and Apollo lunar lander. A local Harvard graduate received a gnome wearing a Yale t-shirt.

At local schools, the gnomes have delighted students, who posed for photos with their visitors.

So, where are they coming from?

The creators have, however, launched a Facebook page, Gnomadic Gnomes of Wytheville, so residents can keep up with the gnomes and their journeys.

The expressive gnomes are meant to spread holiday cheer, one of the masterminds behind the operation said, adding that they were born from a Facebook post that share the idea of crafting a gnome from an upside down tomato cage, evergreen foliage, stuffed nylon hosiery for a nose and a Santa hat. Wytheville’s gnomes have a round piece of wood for a nose.

From that online post, the original three gnomes were created.

“We intended to share them with the neighbors as a fun game,” the Gnomadic Gnomes spokesperson said. “The idea was to "gnome" someone by leaving one of the mischievous little guys in someone’s yard. Maybe dress them up or make a funny sign too. Then that person continues the adventure by moving him and "gnoming" someone else. Well, this escalated pretty quickly! Three turned into six gnomes and then six into nine. Soon we were dropping gnomes at local businesses. They were popping up at schools. Creating a Facebook page seemed to be the only way to keep up. I so glad we did. Our little community has come together and it has been so much fun to watch. Our wonderful community deserves all the credit for their wonderful adventures.”

After all nine gnomes were put into circulation, residents have taken over and run with the idea, popping up at Speedwell Elementary School, whose students took him on a field trip to the movie theatre; Rural Retreat Elementary School; Seven Sisters Brewery; Local Artists and Sellers; and homes all over town.

“My heart is totally full,” one resident posted on Facebook. “I pulled up to find this adorable (gnomes) at our home. Christmas can come now I found the Christmas cheer I was missing!!!”

Gnomadic gnomes and its Facebook followers have even named some of the fun and fuzzy gnomes. There’s Tony GnRomo, Gneil Armstrong, Ole' Straight Stach, Kgnome, The Artist Formerly Gknome as %, Gnomand Rockwell and Styx (one look at his twiggy mustache explains it).

Gnomadic Gnomes hopes the tradition of passing the gnomes around with become a holiday tradition.

“While I would rather remain anonymous, I do need to give a shout out to High Mountain Pines of Rural Retreat for help with materials,” the Gnomadic Gnomes spokesperson said. “Also, to Petals of Wytheville, Skeeters and Seven Sisters Brewery for allowing the first celebrity guest appearances and the initial social media exposure that helped to get it all started.

“The Gnomadic Gnomes are still on the loose,” he added. “Everyone keep a watch for them. Don't forget to share their shenanigans and above all have a very Happy Holidays!”