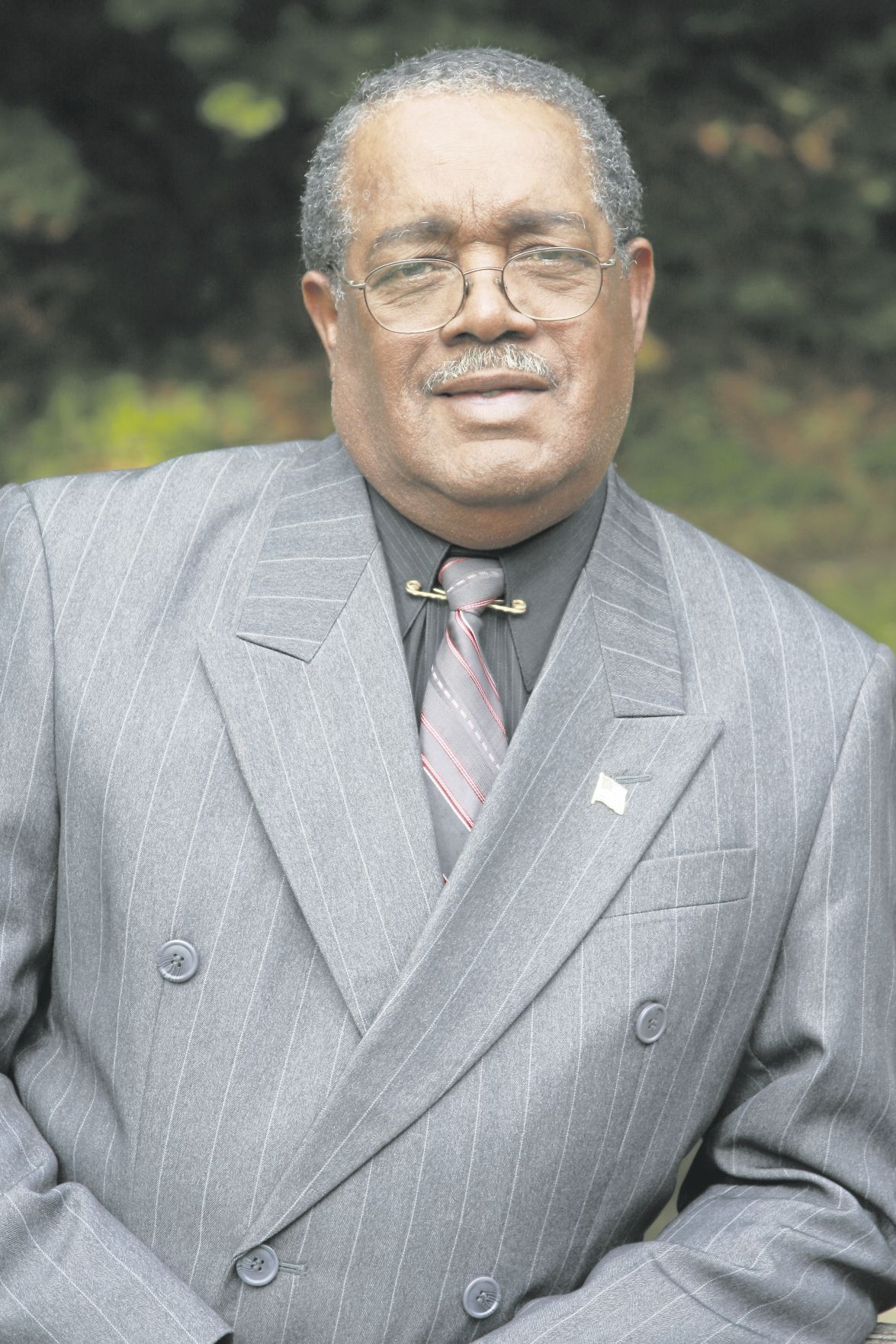 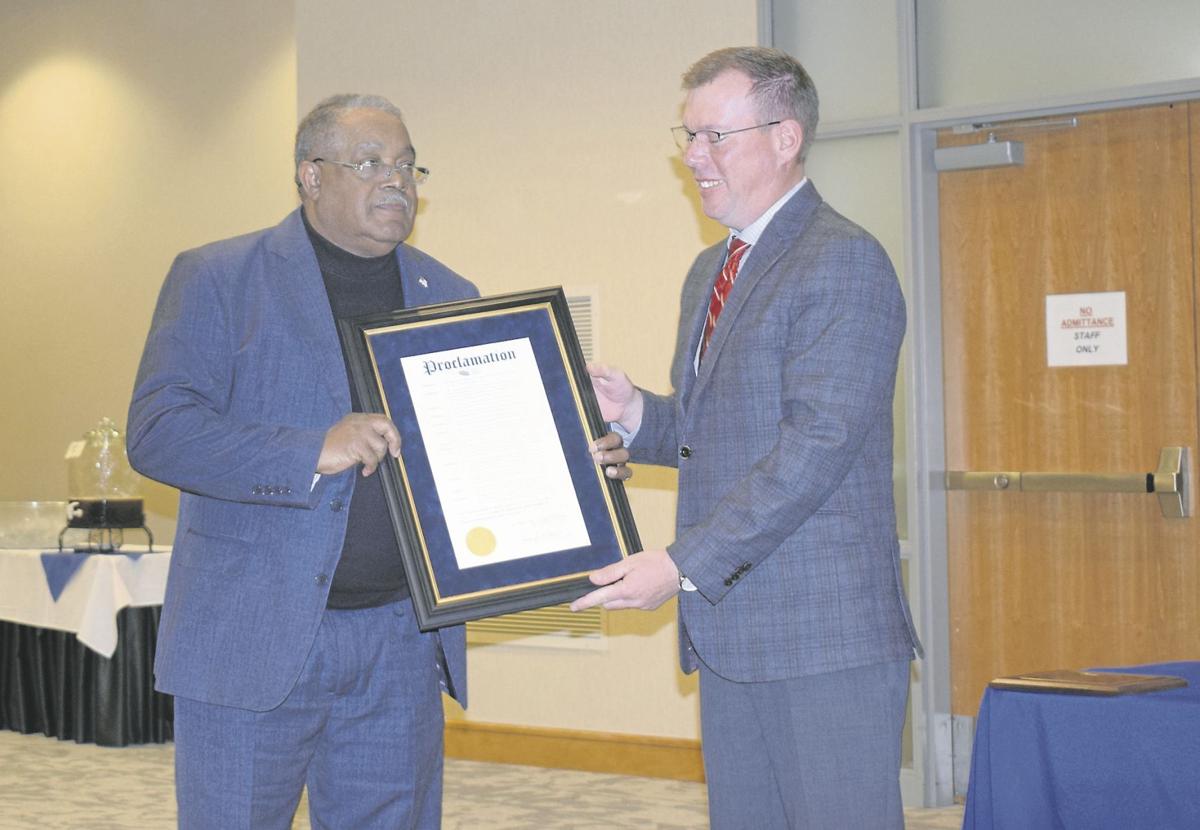 John Johnson, left, accepts a proclamation from Matthew Clarke honoring him as the Stanley King Sr. Outstanding Citizen of the Year.

John Johnson, left, accepts a proclamation from Matthew Clarke honoring him as the Stanley King Sr. Outstanding Citizen of the Year.

A local historian, dentist, business owners and farmers were among those honored Nov. 14 by the Wytheville-Wythe-Bland Chamber of Commerce. The 73rd Annual Membership and Awards Dinner was held at the Wytheville Meeting Center.

Wytheville native and historian John Johnson was honored as the Stanley King Sr. Outstanding Citizen of the Year Award, which recognizes lasting contributions to the community.

The son of Reece and Ida Johnson Sr., Johnson graduated from Scott memorial High School and completed a military college program at the University of Munich in Germany. In 1974, he obtained a degree from Wytheville Community College.

He worked with his father and became a master stone and brick mason, carpenter and painter. Johnson served more than two decades in the U.S. Army and Virginia National Guard, retiring at the top of enlisted ranks.

He and his wife, Ethel, have two daughters, five grandchildren and several great-grandchildren.

Johnson is a gifted musician on alto, tenor and soprano saxophone and can be heard playing for local bands, numerous praise and worship teams, community activities and local events.

A nationally recognized genealogist and historian, Johnson has been recognized several times by the Smithsonian Institution in Washington, D.C., and has received prestigious awards for the genealogical and historical work. He has published numerous articles, written books and been a featured columnist on local genealogy and history.

In addition, Johnson is an active volunteer in the community and has a long history of volunteerism. He was instrumental in preserving the historic Wytheville Training School and its adaptation into the Wytheville Training School Cultural center. Also, Johnson was instrumental is compiling much of Wytheville’s Historic Walking Tour, especially information on the African-American History Loop.

Manufacture Leadership Award: Clarke Precision Machine. The company, acquired in 2015 by Matthew and Sandra Clarke, is a build-to-order welding, machining and fabrication shop supporting companies throughout Southwest Virginia and the surrounding regions.

This year, the company was one of 12 companies to participate in the Virginia Economic Gardening Pilot Program that targets second-stage companies that are growth-oriented and have moved beyond the startup phase. By addressing strategic growth issues, the pilot program enables high-growth companies to achieve the next level of success. In this program, they will invest to purchase new machinery and expand its manufacturing facility by creating 12 new jobs and position the company to handle future potential contracts in automotive, construction materials, industrial mixing and other industries.

In 2014, Lester Insurance Group was formed to purchase the Winfred C. Harper Agency in Burlington, North Carolina, a multi-generational agency formed in 1949. A few years later, the agency opened a branch office in Abingdon. Lester Insurance also purchased the assets of Cox Insurance Services, which gave the business another division that specialized in transportation insurance.

Entrepreneur of the Year Award: 103 Towing & Recovery, a family owned and operated business in Wytheville, was established in the spring of 2015. Owner Clayton Bush has added staff and worked to improve the towing industry as a whole by helping to create safer work environments for operators nationwide. Advocating for the Slow Down Move Over Law and roadside safety, Bush has been instrumental in putting together the Slow Down Move Over Rally held in the area. The business has become Wreckmaster Certified and Bush has been trained at the International Institute of Towing and Recovery and is a member of the Towing and Recovery Association of America.

Agriculture Achievement Award: Jerry and molly Thompson of Bland County. Agriculture continues to be one of the largest industries in the county, and large and small family farms play an integral part. The Thompsons began farming with Molly’s father, J.S. Buddy Penley in the early 1970s with a registered Angus beef farm. Later, they purchased a large majority of his land and began a cow/calf operation. They currently raise all of the hay needed to fee throughout the winter.

Gardening is also an important part of their lives, as they raise most of their vegetables and are fortunate to have a community cannery to process much of their food.

Another busy part of their farm life is spent visiting and directing spelunkers to the seven caves, two of which they own, along the foot of Walker Mountain. The caves span about two miles, above ground, and are frequently visiting by cavers from all over the world. The Virginia Tech Cave Club is instrumental in caring for the caves and helping care for the land. The Thompsons have tentatively purchased another cave within the system.

In addition to their farm life, the Thompsons serve on numerous board and volunteer for many community groups and activities. A retired law enforcement officer, Jerry Thompson is a former Bland County Sheriff.

Tourism Achievement Award: Millwald Theatre. For more than 92 years, the Millwald Theatre has been the centerpiece of the downtown Wytheville historic district. Many people belive it is the most important historic property remaining in the downtown district required to ensure continued economic revitalization.

Millwald Theatre Inc. is a nonprofit organization created specifically to purchase, renovate and operate the property. The group purchased the theatre with dollars allotted from the Wytheville Town Council and will spend millions to renovate it into a multi-purpose entertainment and education venue. Restoration plans include re-establishing the original single 500-seat auditorium with a full stage, adding state-of-the-art sound and projection equipment and developing a green room, classrooms and support facilities on the lower level. It will also serve as a community auditorium.

Construction is expected to begin in the spring of 2020 and cost nearly $4.5 million. The project will take approximately 2.5 years to complete.

Outstanding Chamber Volunteer: Judy Lefler, who joined the chamber board in 2014. She has attended monthly board meetings for six years along with numerous ribbon cuttings, open houses and other events. She volunteers for many chamber events and serves on various committees.

Bland County Business and Industry Community Impact Award: Bland Family Clinic. The clinic has a long history of commitment to the Bland County community, always eager to assist in any way to support the citizens and organizations of Bland County, as well as improve their overall health.

Owner, Pat Mitchell, nurse practitioner, is quick to come to the needs of others without any desire for notoriety or credit for her service.

Bland County Business and Industry of the Year: Love’s Travel Stops and Country Stores/Arby’s. Over the last decade, Bland County has worked to develop a stronger economy that will provide employment opportunities and foster a stronger local tax base. The award went to Love’s, which is the first major development near the interstate exits and the county hopes more will follow.

Since opening, Love’s/Arby’s has experienced an increasing volume of visitors, a testament to their commitment to providing outstanding service while maintaining a clean and professional On a weekly basis, the store competes with other similar stores across the nation in terms of volume and sales, often being the number one store nationally for the week. While they have had tremendous success in their short time in Bland County, their leadership and staff continually work to improve services and efficiencies.