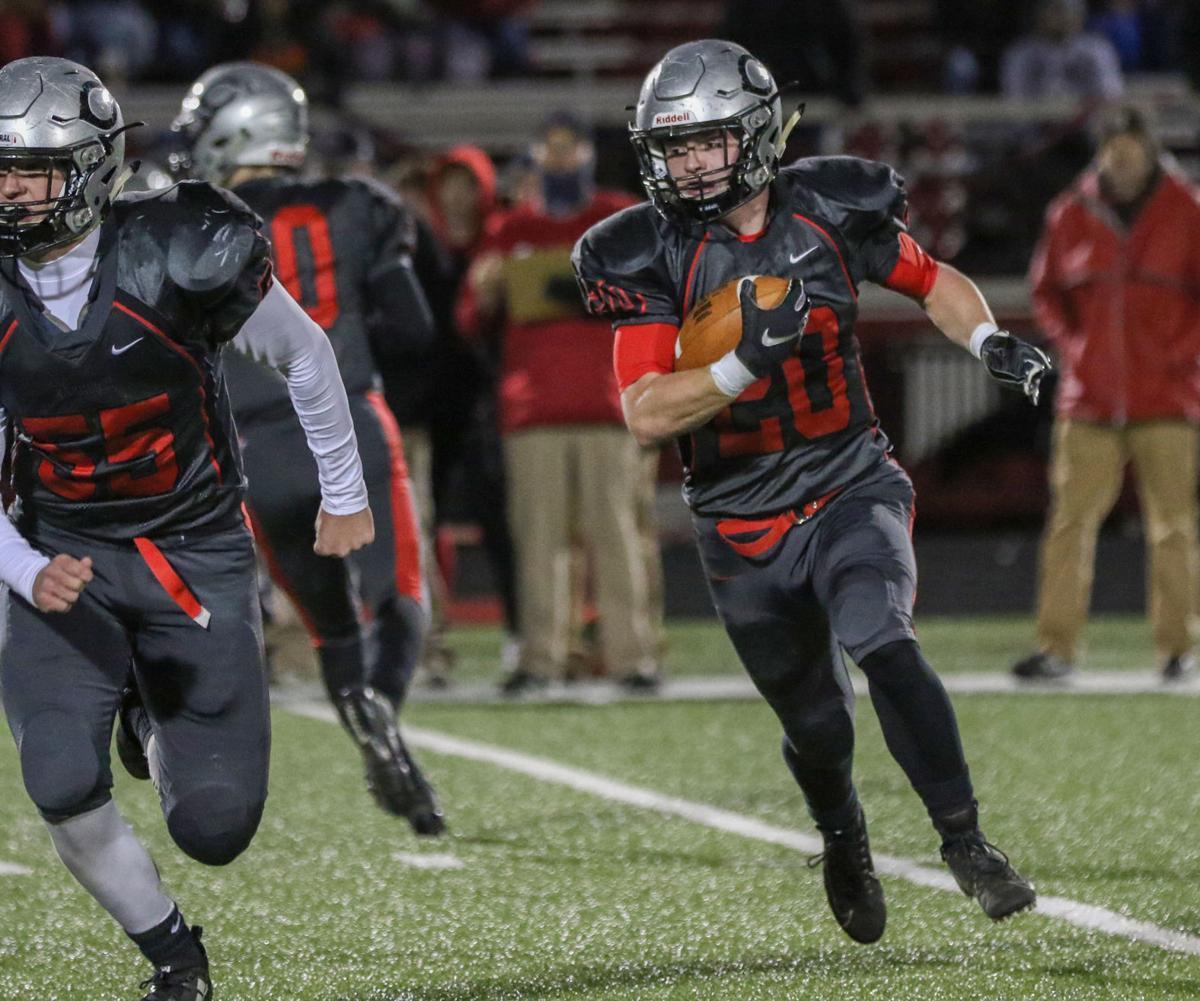 Wise Central's Matthew Boggs takes the ball on a sweep for the Warriors. 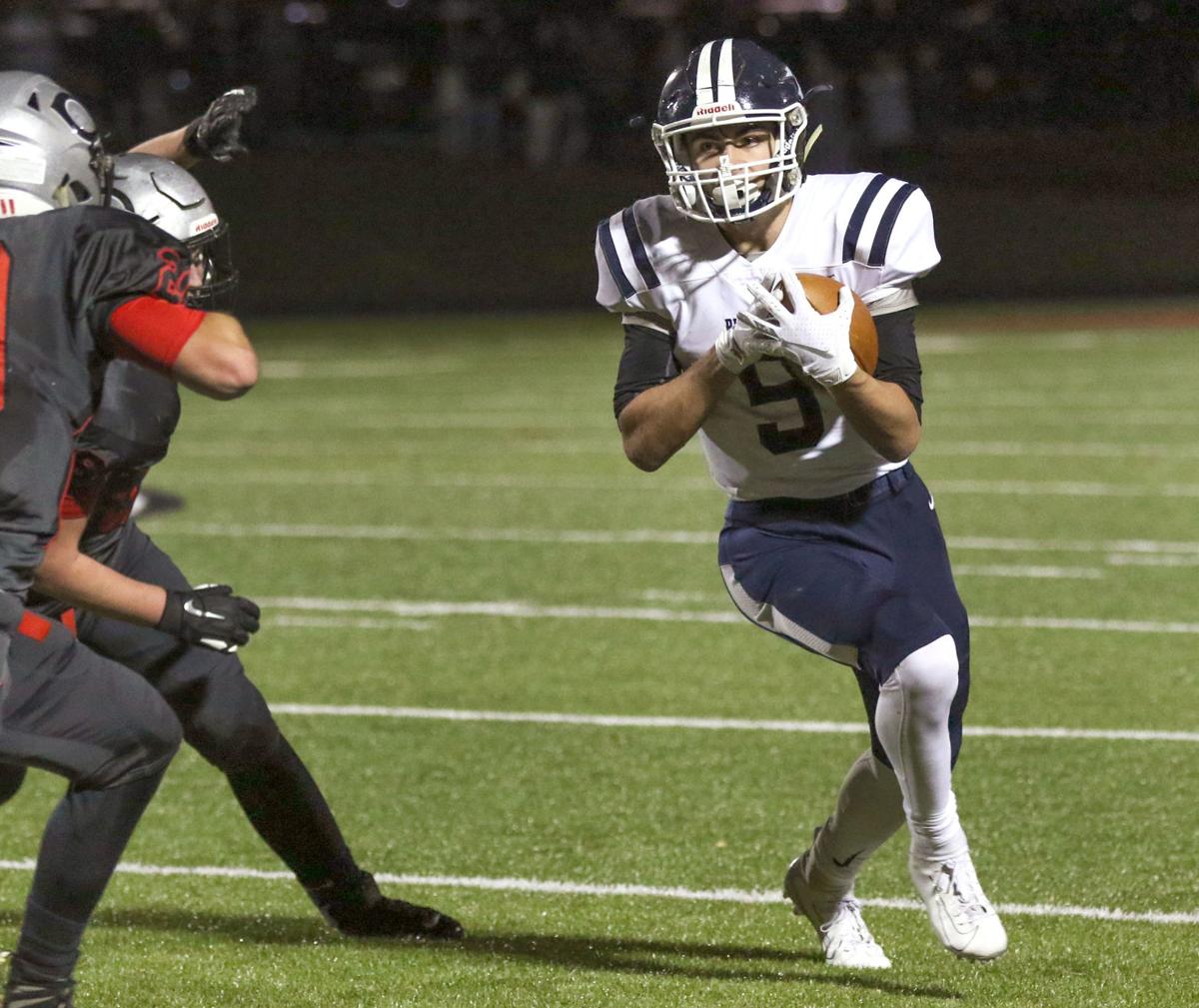 Richland's Colton Mdeley runs the ball for the Blue Tornados against Wise Central. 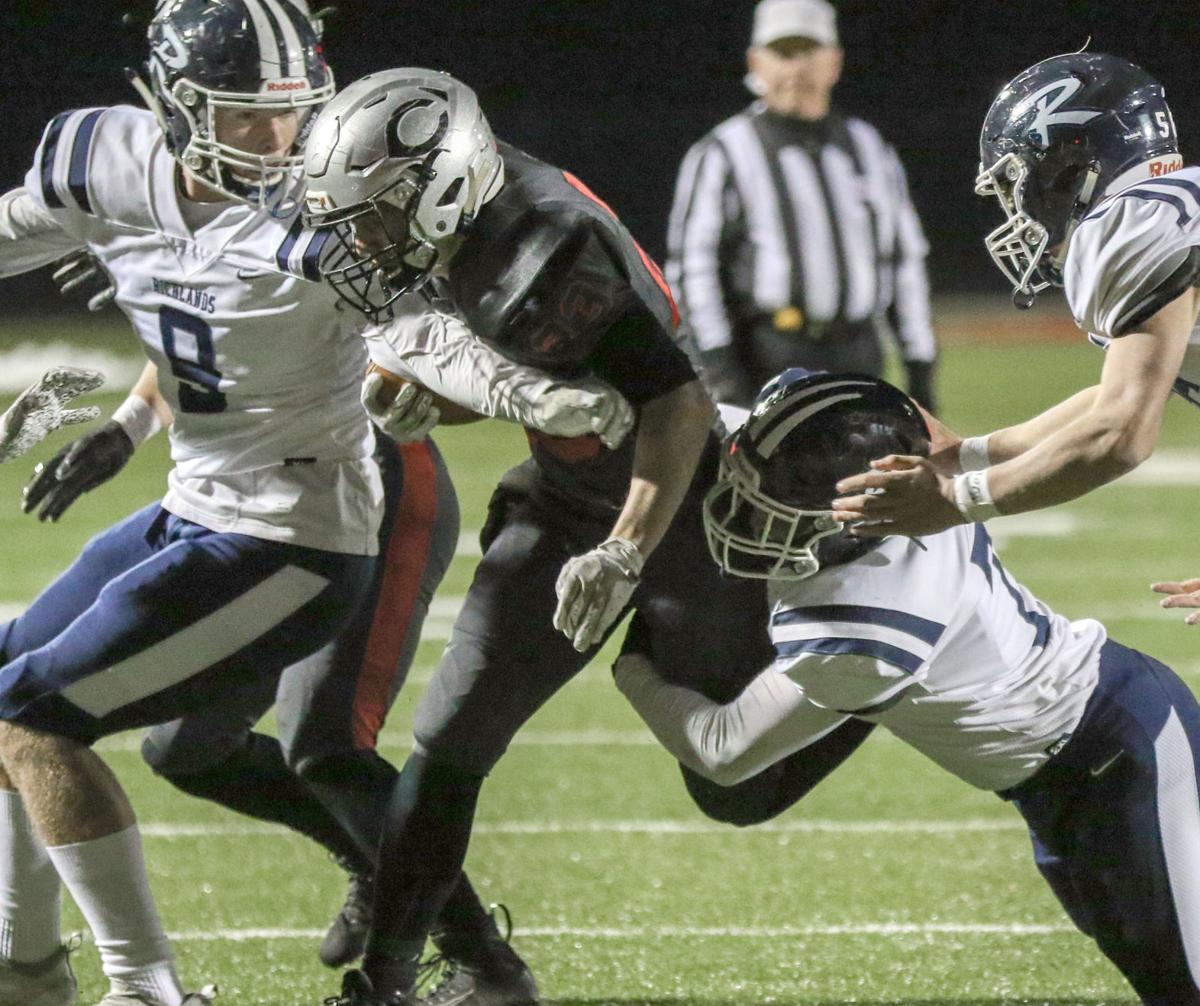 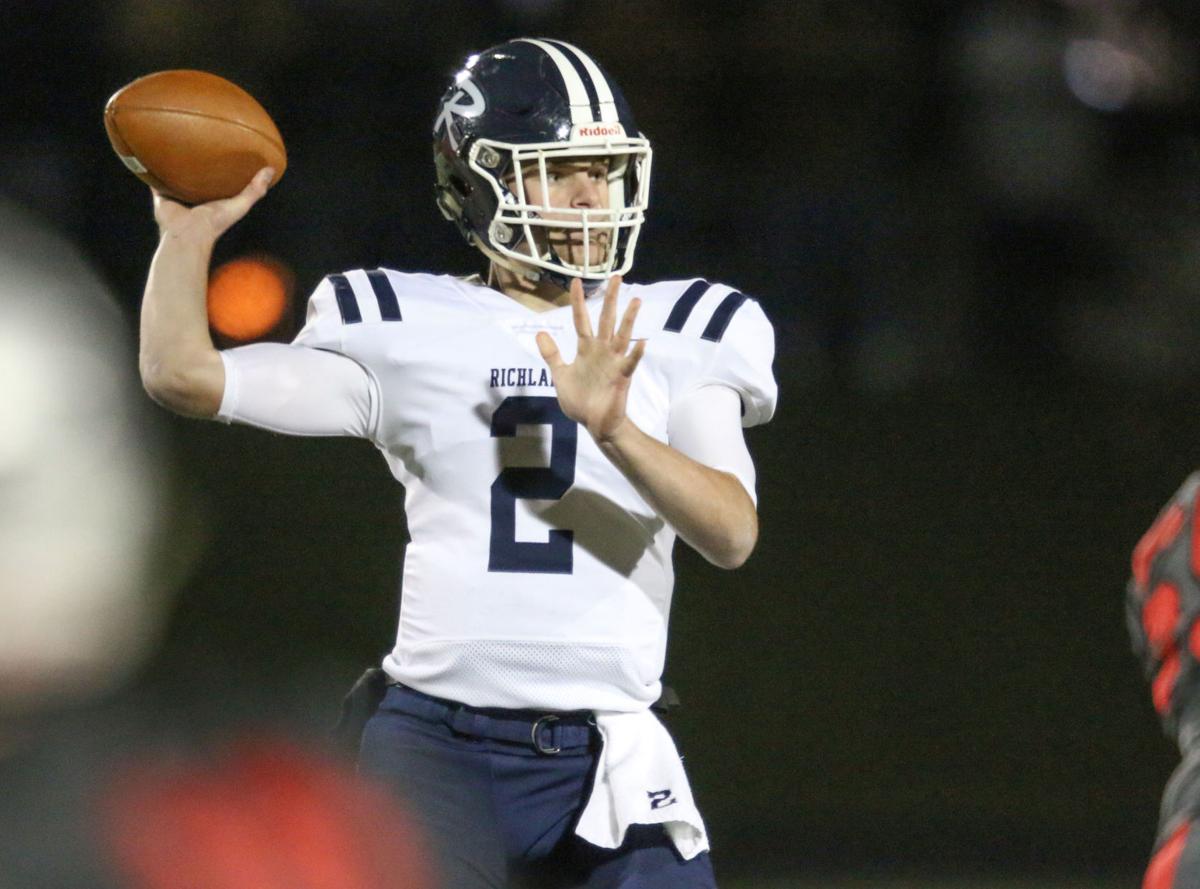 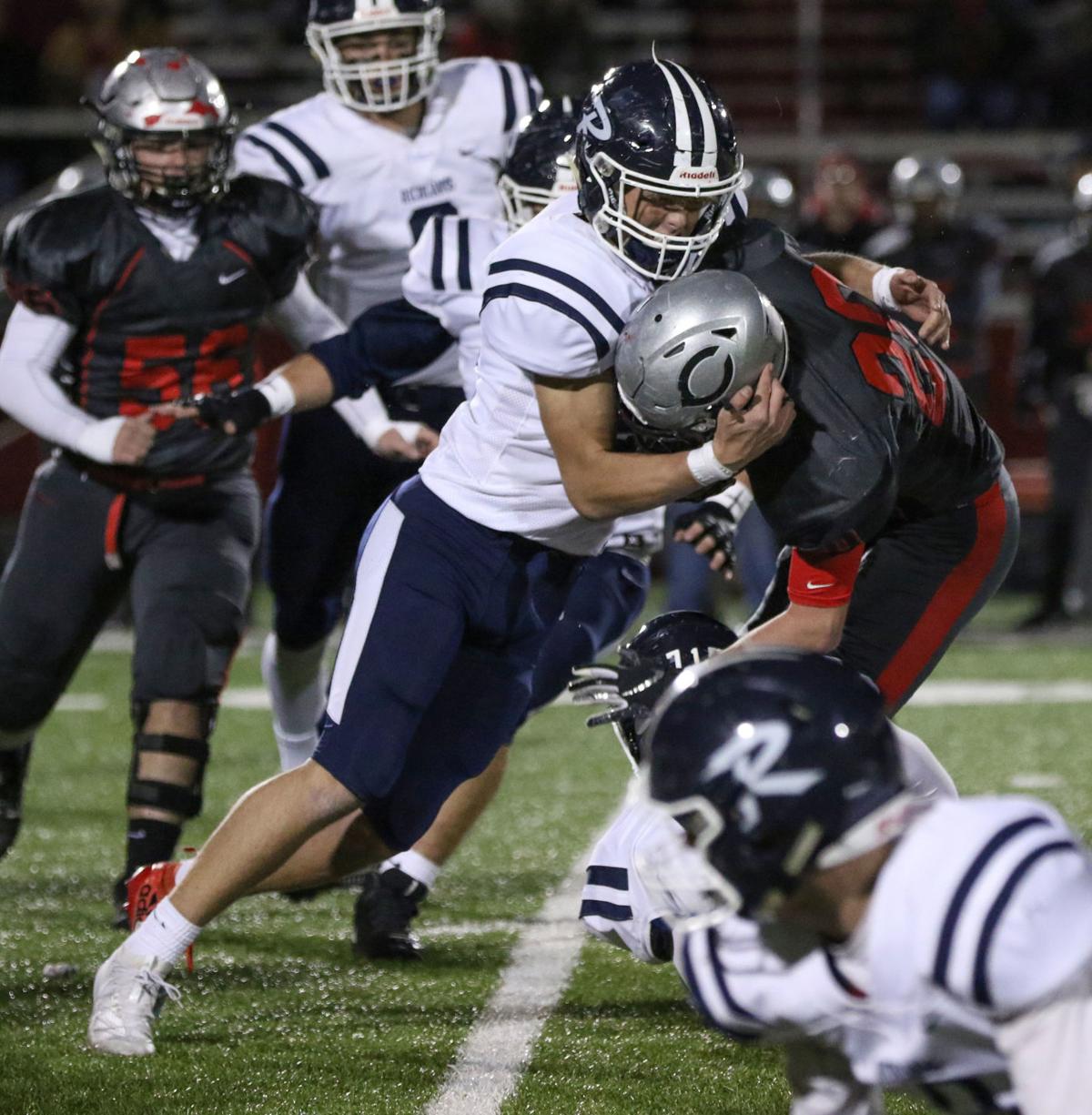 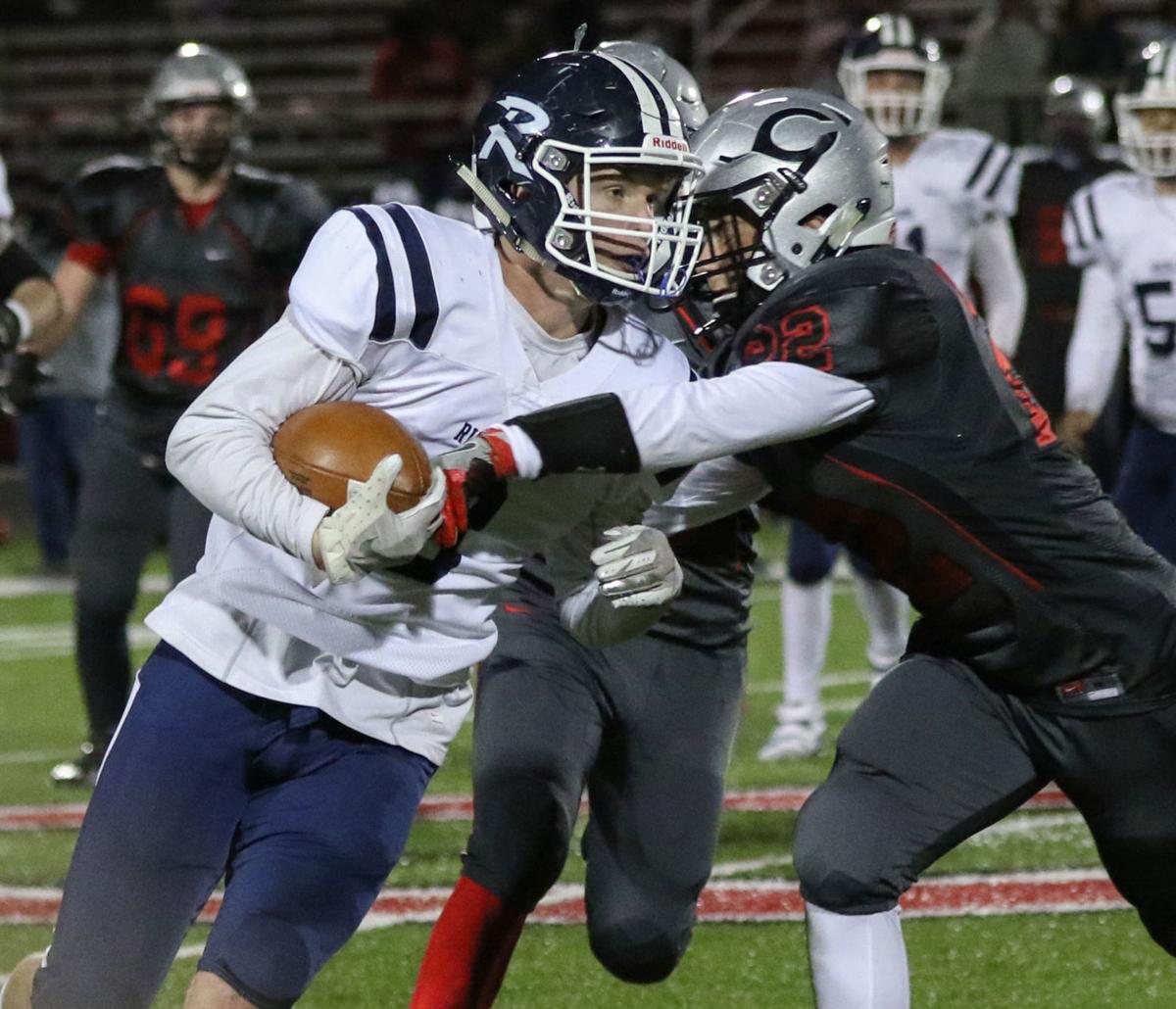 Wise Central's Matthew Boggs takes the ball on a sweep for the Warriors.

Richland's Colton Mdeley runs the ball for the Blue Tornados against Wise Central.

He played a big part in it.

“It is very exciting,” said Mullins, who threw for two touchdowns and returned an interception for another score in the Warriors’ historic victory on a cold Friday night at Warrior Stadium. “I am very proud of my whole team, coaches, everybody. I loved it.”

Wise County Central (9-2), which had been 0-4 in playoff games since the school opened in 2011, pulled away from Richlands with help of two turnovers and a late touchdown run for a 28-16 VHSL Region 2D first round victory over the Blues.

Richlands (6-5) led 10-7 in the third quarter and was driving for what appeared to be more, but the Blue Tornado turned it over on consecutive possessions, leading to 14 points and a 21-10 Wise Central lead.

“I thought defensively we were locked down. I thought we had them dialed up pretty good,” said Owens, whose Warriors held the Blues to just 74 yards on the ground. “I thought Coach [Jason] Blevins, our defensive coordinator, I thought he had a really good plan for them and the kids carried out the plan. They executed.

“We got some big pops there, especially they catch the one ball and we come up and lay a pretty good lick and get a turnover there. That was all big stuff. We got enough turnovers there to win the football game.”

Tyson Tester picked up a loose football after Sage Webb was hit hard following a pass by Cade Simmons, returning it 19 yards the Richlands’ 18-yard line. Four plays later, Mullins connected with Matthew Boggs for a 6-yard touchdown and a 14-10 lead going to the final period.

Mullins’ biggest moments in a game full of them came on Richlands’ next drive, with the Blues getting the ball to the Central 17. Simmons attempted a pass toward the end zone, but Mullins jumped up, snagged it out of the air and had a convoy of blockers for a 97-yard return.

“It was incredible. As soon as I saw it I just went for it and went as quick as I could to try to make it to the end zone. It was exciting,” Mullins said. “It was a great play. I loved it, everybody loved it.

“I am glad I got to do that, but our defense played great all night, that is why I got the pick, everybody did their job.”

That play proved to be the dagger, according to veteran Richlands head coach Greg Mance.

“We were down there ready to take the lead,” Mance said. “We hadn’t played bad, we just didn’t take advantage of a couple of opportunities, but Wise Central, they have got a defense.

Richlands took a 7-0 on the opening drive on a 3-yard run by Sage Webb - a drive highlighted by a 43-pass from Simmons to Will Tarter, but the young Warriors, the majority of whom are sophomores, didn’t panic at adversity.

“That is an awful good football that we just beat. I have a lot of respect for Greg Mance. He has done this thing for a long time, he is a heck of a football coach,” said Owens, whose Warriors went into the break with the score tied the score at 7-7 following a 14-yard scoring pass by Mullins on a 3rd and goal to a wide open Ben Brickey. “The kids played hard. We had our backs against the wall a couple of times and we just continued to make plays.

“Ethan with the big interception, that was a back-breaker. I couldn’t be more happy, I am proud of my kids and proud of my coaches.”

Levi Forrest, who missed a first half 48-yard field goal attempt, connected from 37 yards in the third period to put the Blues up 10-7, but the lack of a running game proved fatal for Richlands, who did get 233 yards through the air from Simmons. Webb (4-90) and Tarter (3-43) were his primary targets.

“We couldn’t run the football and give those guys credit,” Mance said. “When we threw it we were a step off. We were just not on our game tonight...We were just a little step off, but give them credit. They played an outstanding game and they deserved to move on.”

Simmons was able to connect with Webb for a 57-yard strike and followed that up with a 2-yard scoring run to pull within 21-16 with 2:53 to play.

Tester recovered an onside kick attempt, and the Warriors were promptly called for a holding penalty. Mance felt confident the Blues would get the ball with a chance to win.

“One of their weaknesses is their punting game so we thought we was going to get it back in real good field position with an opportunity to go down there and win it,” said Mance, who expected to get the ball back with about two minutes to play. “Daggone, two plays later they are in the end zone, but you have got to give them credit.”

CJ Crabtree, who was held in check for much of the night, ran for 116 of his 146 yards in the second half, with the biggest being on consecutive carries, bullying his way for 15 yards and a first down and then got loose for 40-yard scoring run to finish it off with 1:35 left to play.

“Those little kids run hard, they blocked their hind ends off and we just didn’t make a play there at the end,” Mance said. “We were just a step off all night and no excuse. Wise Central outplayed us tonight and they deserved to win the game.”

The Warriors finished with 282 yards rushing, including 75 for Boggs, while Mullins threw for 47 yards, including a pair of touchdowns.

Wise Central, whose losses this season have come to Ridgeview and Abingdon, will get another chance next week against the Wolfpack, who defeated the Warriors 41-20 in September.

“On to Ridgeview,” Owens said. “That is going to be a big challenge for us next week.”