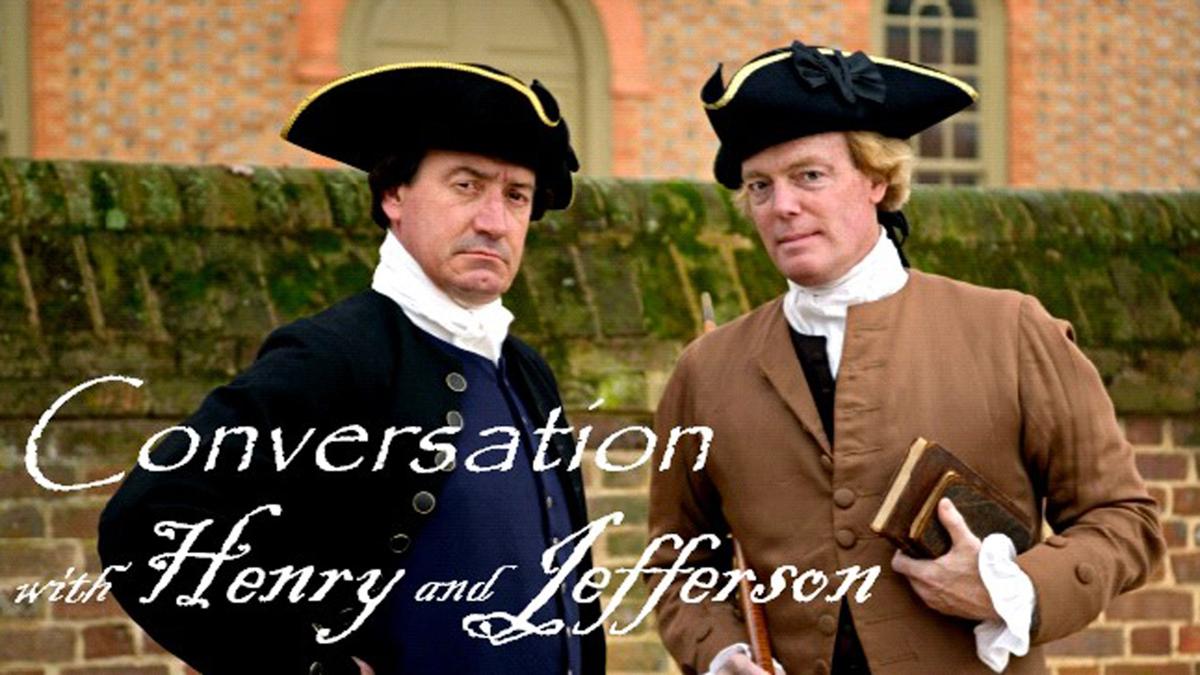 Bill Barker (left), who plays Thomas Jefferson, and Richard Schumann, who plays Patrick Henry, will appear at the Barter Theatre for a conversational debate between the two Founding Fathers. Barker and Schumann both work as historical reenactors for Colonial Williamsburg. 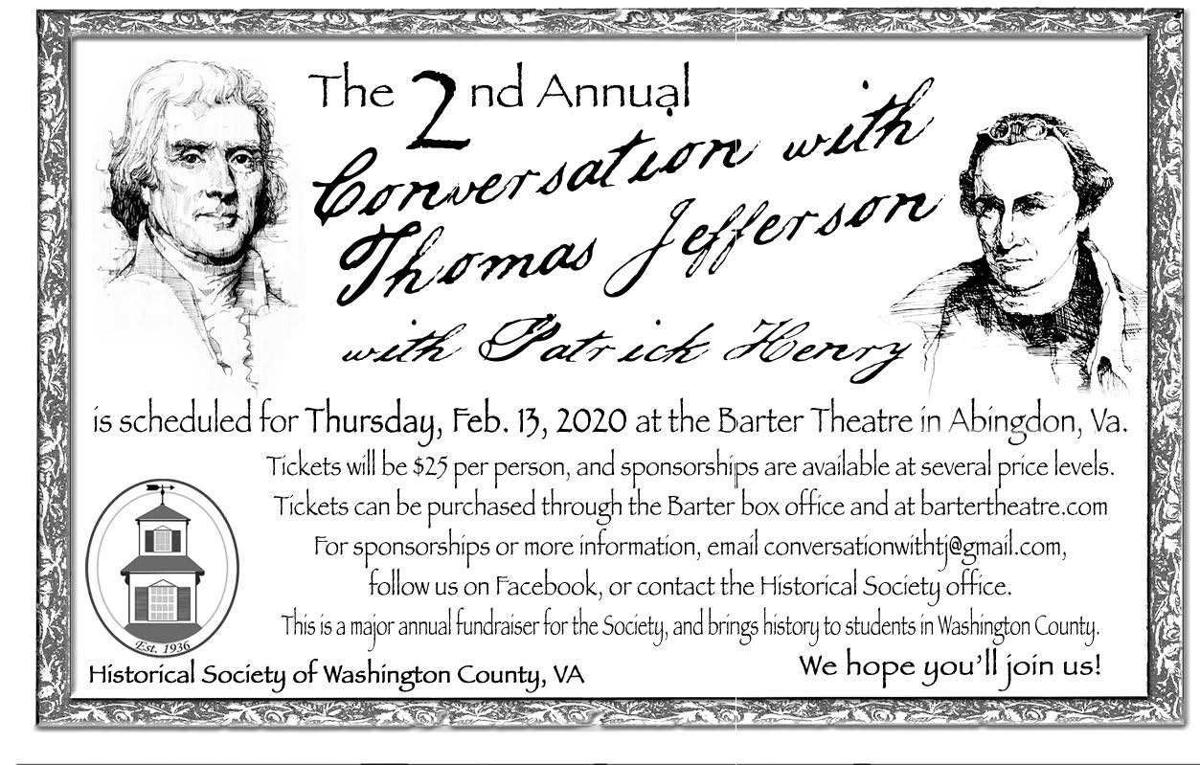 Bill Barker (left), who plays Thomas Jefferson, and Richard Schumann, who plays Patrick Henry, will appear at the Barter Theatre for a conversational debate between the two Founding Fathers. Barker and Schumann both work as historical reenactors for Colonial Williamsburg.

ABINGDON, Va. — Looking every bit the 18th-century gentlemen, Thomas Jefferson and Patrick Henry will take the Barter Theatre stage on Feb. 13 for an interactive evening of history.

Dressed in knee breeches, waistcoats and ruffled cravats (in place of modern neckties), Bill Barker, who portrays Thomas Jefferson, and Richard Schumann, who depicts Patrick Henry, will participate in a lively, robust conversation at 7 p.m.

Beginning at 6:30 p.m., guests will enjoy Colonial-era music from local brothers The Sons of Liberty and the Muster Ground Musick Fife and Drum Corps.

“Conversation with Henry and Jefferson” is the second annual fundraiser for the Historical Society of Washington County, a 501(c)3 nonprofit organization.

“It should be interesting,” said Martha Keys, a member of the board of directors. “Last year, Jefferson added some local flavor to the conversation.”

Transport back in time

The Colonial Williamsburg actors, who are known as master interpreters, will transport audience members back in time, allowing them to experience what it was like to mingle with the two Founding Fathers in the early 1800s.

“I will wear a wig and spectacles such as what Mr. Henry wore,” said Schumann, during a phone conversation from Williamsburg.

“Our debate might be about church and state, the constitution or public education — or maybe a combination of all three,” he said.

The early history of Washington County is closely tied to Jefferson and Henry.

Jefferson’s father was a Virginia surveyor. The westward expansion on the Wilderness Road, Lord Dunmore’s War, the Fincastle Resolutions and the men at Kings Mountain were all connected to Jefferson.

Henry’s sister, Elizabeth, was married to Gen. William Campbell of the Kings Mountain expedition. She later married Gen. William Russell and is credited for bringing Methodism to Southwest Virginia. The Madam Russell Methodist Church in Saltville is dedicated in her name.

Educating the next generation about our country’s history is essential for success, according to Schumann.

“Patrick Henry is one of the lesser-sung Founding Fathers, which is a real shame because he was an amazing prophet,” he said.

“The way he made predictions about what was going to happen proved that he was an avid student of history. There are no better two people to learn about the past than from Jefferson and Henry.

“History repeats itself,” said Schumann, who believes our society is close to mirroring events of a century or more ago.

“Many of the issues Jefferson and Henry dealt with 250 years ago are issues that surface today,” he said.

Jenny pointed to efforts made by Charles Cummings and other individuals to create the State of Frankland (also known as the State of Franklin) in Southwest Virginia, Northeast Tennessee and parts of North Carolina. As a leader, Cummings wanted to secede from Virginia because they were not getting the cooperation from the state’s capital they wanted.

“It was Patrick Henry who shut down what they were trying to do and prevented Washington County from seceding from Virginia. The same thing is going on today with people in this region who feel Richmond is so far removed from their concerns.”

Regular tickets are $25 per adult, which includes one optional student ticket per adult. Tickets are available in person at the Barter Box Office or by visiting bartertheatre.com. Go to “All Shows,” and find the date; a seating chart will appear.

The Historical Society of Washington County has been in existence since 1936.

A new location at Main and Russell streets in Abingdon is offering additional space for research and exhibits, easily accessible to local residents and researchers from around the country.

The historical society houses more than 7,000 books, 180,000 digital images and more than 1 million indexed records, many of which are not available online.

During their visit to Southwest Virginia, the acclaimed reenactors will visit several public schools on Feb. 13 to educate and interact with students.

Jefferson will visit Abingdon Elementary from 9-11 a.m. and the junior class at Abingdon High School at 1:30 p.m.

A four-course meal of Colonial favorites prepared by chef Charles Parker will be served at 6:30 p.m. on Feb. 12 at Abingdon Vineyards, where Barker and Schumann will speak about their lives with a focus on wine and viticulture in Virginia.

Each course will be paired with an Abingdon Vineyards wine.

The fee for the fundraising meal is $100 per person. Seating is limited. Call Abingdon Vineyards at 276-623-1255 to check ticket availability.

» What: Conversation with Henry and Jefferson

» Cost: $25 per person, free student tickets available with an adult

» What: Wine Dinner with Henry and Jefferson