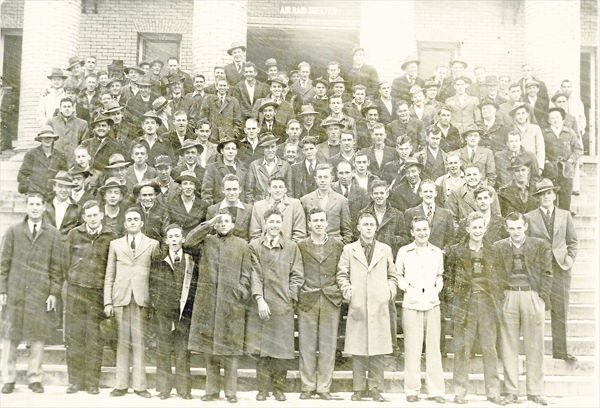 This photo, taken by Greear Studio in 1942, shows more than 100 World War II draftees standing on the front steps of the Smyth County courthouse. Carol Snider shared it with the hope that community members can help identify the men in the photo. 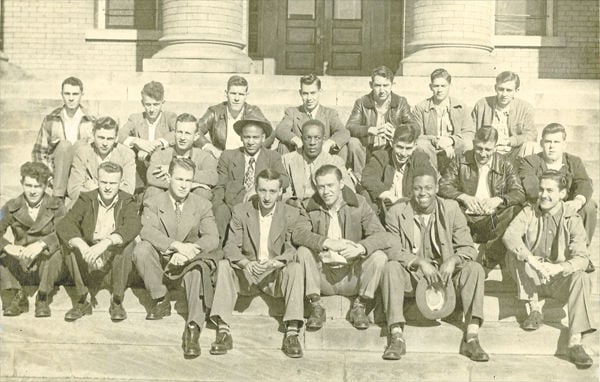 This photo, taken between Feb. 23, 1951-Feb. 3, 1953, shows Smyth County Korean War draftees on the courthouse steps. The only man identified in the picture is Everette Ray Scott, who is on the front row, far left. Again, Carol Snider shared the photo hoping that readers may be able to help identify the other men. 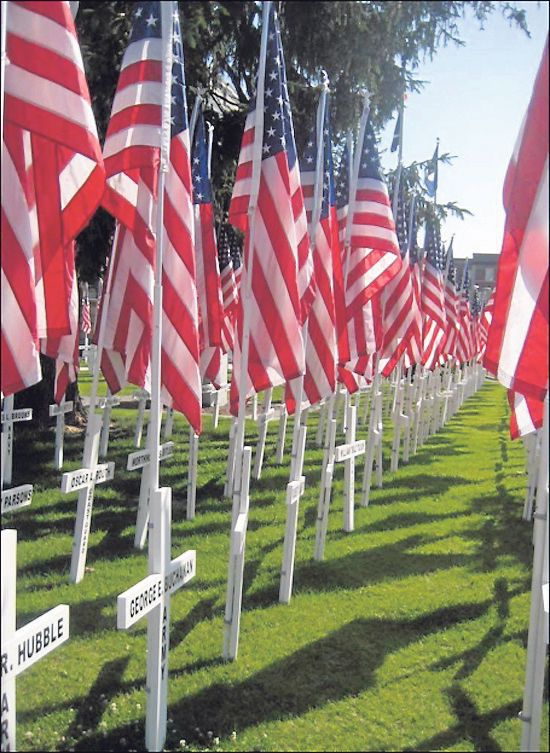 Helen Richardson and Carole Rosenbaum preserved some of the stories behind the flags on the courthouse lawn.

This photo, taken by Greear Studio in 1942, shows more than 100 World War II draftees standing on the front steps of the Smyth County courthouse. Carol Snider shared it with the hope that community members can help identify the men in the photo.

This photo, taken between Feb. 23, 1951-Feb. 3, 1953, shows Smyth County Korean War draftees on the courthouse steps. The only man identified in the picture is Everette Ray Scott, who is on the front row, far left. Again, Carol Snider shared the photo hoping that readers may be able to help identify the other men.

Helen Richardson and Carole Rosenbaum preserved some of the stories behind the flags on the courthouse lawn.

Before I moved to Marion with my family, I would have been unlikely to name Memorial Day as one of my favorite holidays. Growing up, I have no recollection of major local celebrations surrounding this date on the calendar. I’m sure there were events that honored those who had sacrificed their lives in service to our country, but nothing could compare to the way our community now pays tribute. It is impossible to drive through Marion during the days surrounding Memorial Day and not be overwhelmed with the sight of hundreds of flags on the courthouse lawn and adjacent Royal Oak Presbyterian Church property. The crosses supporting the flags bear the names of local men and women who served in various branches of the military with honor and have now passed away.

This year, typical Memorial Day festivities in Marion have been interrupted by the COVID pandemic. The blasts of gunfire from reenactors and the cadence of the marching band will not be heard echoing off the buildings of Main Street during the annual parade on Monday. The seats of the Lincoln Theatre will remain empty. The crowds will not gather, in usual fashion, at VFW Post 4667 to hear speakers and music, honoring those who died while in service. Even though much is different about Memorial Day in Marion this year, some things remain the same—the flags still occupy their sacred spaces at the courthouse and our thoughts and gratitude will still turn to the memory of local heroes who made the ultimate sacrifice in the name of freedom.

In 2008, Carole Rosenbaum and Helen Richardson compiled a book, “Smyth County Remembers,” dedicated to “all the men and women from Smyth County who have served or who are now serving their country and to the families of those men who paid the supreme sacrifice.” The preface offers the story behind the book. “It is the product of two ordinary citizens who recognized the urgency of preserving this history while there are people still living who remember those who died while serving their country.”

Included in the book are “soldiers that were killed in action, died non-battle, prisoners of war or died in accidents or of disease, either overseas or at home. The one thing in common is the fact that all of them were serving their country at the time of their death.”

This Memorial Day, I would like to share just a few of the stories Helen and Carole preserved in this incredible resource.

The first soldier is Private Bowen Preston Aker Jr. He was born on March 19, 1919 and died on May 11, 1943. “Bowen graduated from Marion High School in 1938 and worked for Virginia Lincoln before he volunteered for the Army in 1940. He always wanted to fly and had taken his training at Chanute Field, Rantoul, Illinois, and Denver, Colorado. Upon graduation in Denver, he had the choice of teaching other soldiers or going overseas. He chose overseas. He was in training to be a bombardier at Nichols Field, Philippines for three months when the war broke out and was in Pearl Harbor when it was bombed by the Japanese. He was serving as a gunner with an airplane crew in the Philippines when he was captured at the fall of Corregidor. He was taken prisoner and marched in the Bataan Death March before being held in a Japanese prison camp for a year and four days before he died. Private Aker was survived by his parents, Mr. and Mrs. Bowen A.J. Aker (Mattie Pearl Hester Aker) and three sisters, Lenora, Josephine, and Margaret. His remains are buried in the Jefferson Barracks National Cemetery in St. Louis, Missouri, in a common grave with eight other soldiers that died the same day.”

PFC Randall Eugene Arnold served in the U.S. Army Infantry during World War II. He was born on January 1, 1920 and died on May 9, 1945. He “entered the service on April 24, 1944, and received his training at Camp Walters, Texas. He went overseas in early October. He died in Germany from an accidental gunshot wound, according to word received from the war department by his wife. He had worked at the Look Lincoln Factory ten hours a day, six days a week for $.10 an hour before joining the Army.

“He was survived by his wife, Mrs. Nannie Belle Hawkins Arnold and son, Hansford Eugene Arnold. Also surviving was his mother, Mrs. John N. (Lizzie K. Cormany) Arnold and a sister, Mirle Kate Arnold. He is buried at Roselawn Cemetery.”

PFC Leslie L. Russell was born in Marion on March 26, 1932 and died on Aug. 1, 1953. He “had been in Korea and was coming home from Ft. Bragg, N.C., on furlough when he was killed in a motorcycle accident. He had attended Oak Point School in Adwolfe and is buried in Laurel Springs Cemetery.

Sgt. Frank Willis Campbell Jr. was born on Oct. 18, 1943 and died on June 1, 1968. He was a resident of Chilhowie and graduated from Carnegie High School in Marion. “He had been in the service for six years,” serving in the 9th Infantry Division of the U.S. Army. “He drowned when his boat capsized while on a combat mission in Kien Hoa, South Vietnam.

Staff Sgt. Gregory Vaughn Pennington, from Konnarock, was born in 1968 and died on June 21, 2004. “He was killed when his camp inside one of Saddam Hussein’s former palaces in Baghdad came under attack. He died from a mortar blast while trying to evacuate his men. He was the last one out.

“Sgt. Pennington graduated from Holston High School in 1986 and joined the Army the next day. He took basic training at Ft. Knox, Kentucky. After leaving the Army, he returned home and worked at the Southwestern Virginia Mental Health Institute in Marion before re-enlisting in 1996. Pennington had been assigned to Fort Hood, Texas before being stationed in Iraq. He was buried in the Azen Baptist Church Cemetery, Konnarock, Virginia.

“He was survived by his parents, Aulbin and Catherine Pennington, of Konnarock, his wife, Janet and two brothers and two half-sisters.”

These are just a few of the men whose stories are recorded for future generations in “Smyth County Remembers.” These are some of the stories behind the flags on the courthouse lawn. Thanks to Helen Richardson and Carole Rosenbaum for taking the time to remind us of the sacrifices of these Smyth County soldiers.

If you have a story or photo you would like to share, I may be contacted at mwlinford@yahoo.com.