This aerial view of downtown Marion was published in the 1952 Marion High School yearbook. 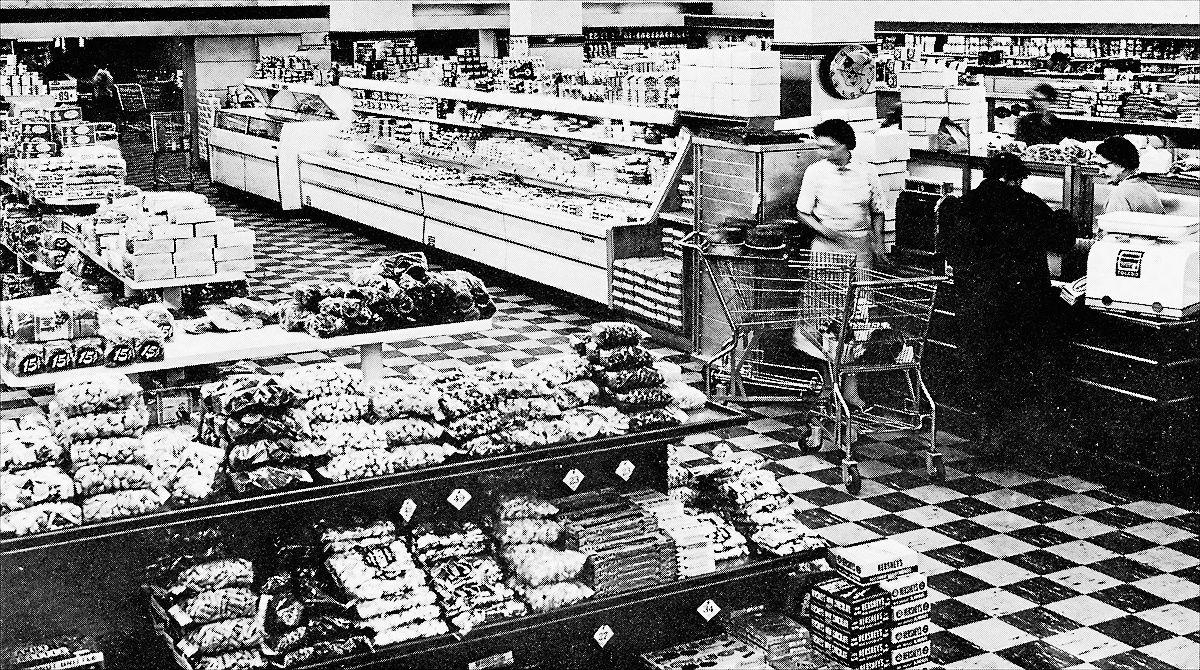 This photo of Piggly Wiggly in Marion appeared in the 1959 Marion High School yearbook. A caption says that the store was established in 1922.

This aerial view of downtown Marion was published in the 1952 Marion High School yearbook.

This photo of Piggly Wiggly in Marion appeared in the 1959 Marion High School yearbook. A caption says that the store was established in 1922.

In 2017, our county had the opportunity to participate in a large-scale digitization project. For several months, members of communities across Smyth County brought their personal yearbook collections to the Marion Library. Basic information was typed into a database, the books were carefully packaged, and sent away for digitization. Two months later, the yearbooks were returned to their owners, while images of our parents, grandparents, aunts, uncles and friends appeared on a website. Facebook was filled with comments from people who had been overcome with emotion, as they discovered images of their loved ones. This was, by far, one of the most gratifying projects I have ever had the privilege of coordinating.

The project was made possible by grants provided by the Library Services and Technology Act (LSTA). “The Institute of Museum and Library Services (IMLS), whose mission it is to create strong libraries and museums that connect people with ideas, administers LSTA funds.”

The Library of Virginia began the Virginia Yearbook Digitization Project in 2015. The first yearbooks scanned and made available online were from the Pulaski County Public Library. According to the LVA website, the “project began after the Library Development and Networking Division loaned scanners and other equipment to Virginia public libraries for digitizing their local history collections. Library staff members noticed that high school yearbooks made up the bulk of the scanning, but the libraries didn’t have a good way to make them available to the public—thus, an idea was born.

“Since then, LVA has coordinated the scanning of yearbooks from 43 public libraries and its own collections and made them available online through the Internet Archive and the Lyrasis digitization collaborative. While most of the digitized yearbooks came from public library collections, some were donated or loaned for scanning by school alumni groups, historical societies, and individuals.”

There are approximately 2,382 yearbooks dating from 1912 to 1977 included in the collection. Smyth County contributed 89 yearbooks for inclusion in the website.

Rose Schoof, who served as the LVA technology consultant for this project in 2017, gave a brief history of the birth of yearbooks. “In the early 1900s, mass production using printing plates reduced the costs and made the yearbook more attainable for students and the school yearbook as we know it was born. Yearbooks hold all sorts of information, on everything from genealogy to educational trends and segregation to fashion history. This glimpse into society is packaged within a single cover, which prior to the 1960s mostly had muted colors and conservative designs. The era of flower power, however, brought with it more psychedelic hues and freestyle graphics to yearbook covers. Technology continues to change the form of yearbooks. Desktop publishing beginning in the 1980s and digital printing in the 1990s both radically changed yearbook design and production. With the explosion of digital pictures, social media, and photo sharing capabilities, I wonder what the future will hold for school yearbooks.”

She noted that looking through old yearbooks is like “taking a walk through the past” and “opening a time capsule.”

Each yearbook tells the story of a community, along with the story of students who attended each school. There are photographs of important landmarks included in yearbooks. Advertisements tell the stories of what businesses were operating at the time. Some yearbooks even include written histories of a community.

The annual staff that produced the 1959 Marion High School yearbook dedicated the volume to telling the history of Marion. “We, the annual staff, would like to give you a better understanding of the history of our school and town through this nineteenth edition of The Hurricane.

“We have chosen for our theme—Yesterday and Today in Marion High School and Marion, Virginia. We have selected this theme because of the extreme interest we have in our school and in our fine town.

“While finding ‘firsts,’ we secured many pictures showing life in Marion, Virginia, of days gone by. We could have shown many pages concerning days of yesterday in Marion, but space allows to show only a representative group.”

In choosing this theme for the 1959 Hurricane, the yearbook staff offered a gift to future generations—the preservation of some of our local history. The book is full of photographs and stories that paint a picture of what life was like in Marion many years ago. Even the advertising section tells the history of various businesses throughout Marion.

Since Smyth County’s participation in the yearbook digitization project, in 2017, some guidelines for the project have changed. In 2015, we were instructed to include yearbooks prior to 1977, due to copyright restrictions. That guideline has now changed and will enable us to collect yearbooks going through the year 2000. This provides us with the opportunity to digitize 23 more years of Smyth County history at zero cost to Smyth County taxpayers.

With this change in guidelines, we would like to announce the second phase of our Smyth County Yearbook Digitization Project. The Smyth County Public Library will be working in conjunction with the Library of Virginia to gather and digitize as many yearbooks, as possible. We need the help of the entire county to make this project a success. We rely upon you to make your personal yearbooks available for digitization for a period of two to four months. We seek the help of any local schools, families and other organizations that may have access to school yearbooks. We are especially interested in yearbooks from the years 1978-2000, since none of those were included in the first phase of the project. We also need to focus on collecting yearbooks from Chilhowie, Saltville and Rich Valley.

The deadline for collection of yearbooks is the first week of March. That gives us six weeks to collect and prepare for shipment. If you would like to participate in this project, yearbooks may be dropped off at the circulation desk of the Marion Library at any time. I may also be contacted at mwlinford@yahoo.com if you have any further questions, or to arrange a specific time for drop off.

We are excited to work together to preserve more of Smyth County’s history and thank you for your help with this project!