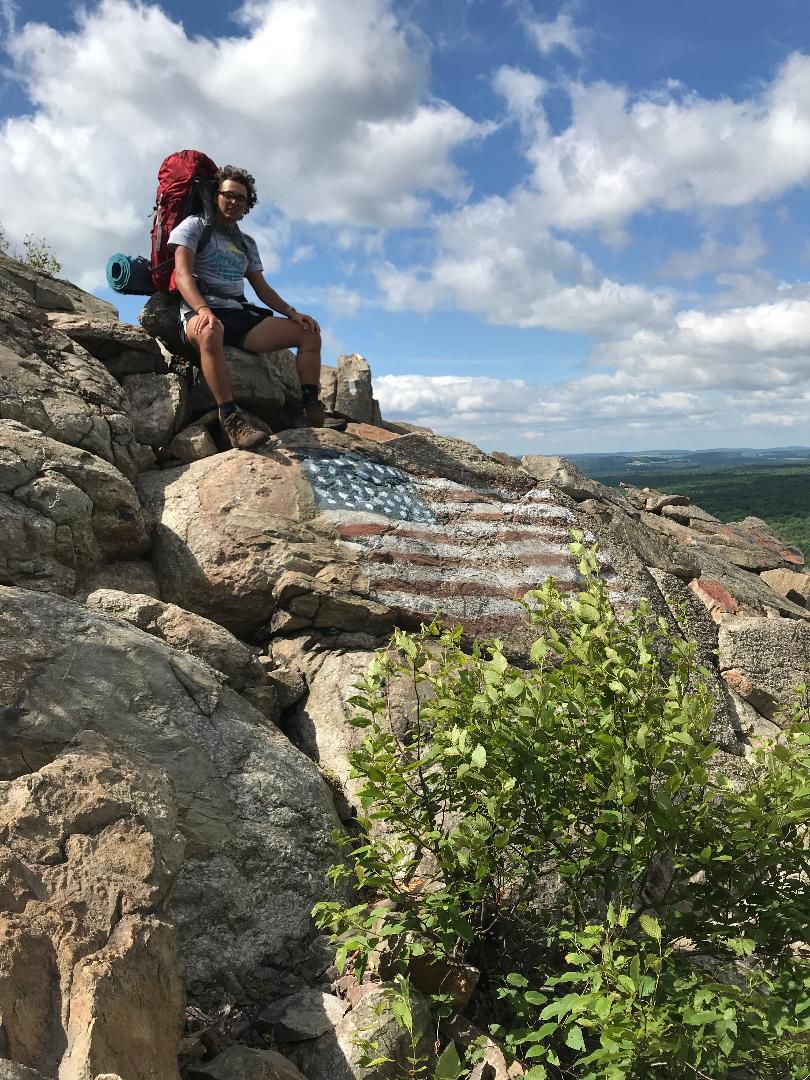 Tilghman Moyer is pictured taking a break while hiking a portion of the Appalachian Trail near his home in Pennsylvania last year. 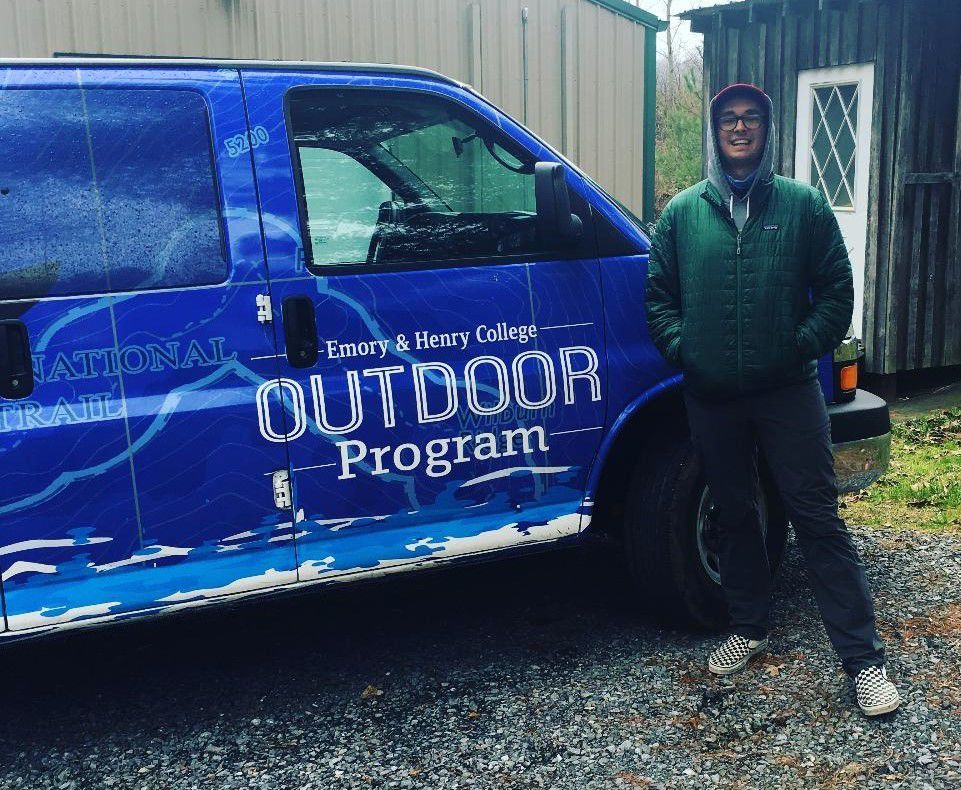 Tilghman Moyer is the first transfer student to enroll in the Semester-A-Trail program at Emory & Henry College. The program combines academic learning with an outdoor adventure on the Appalachian Trail. 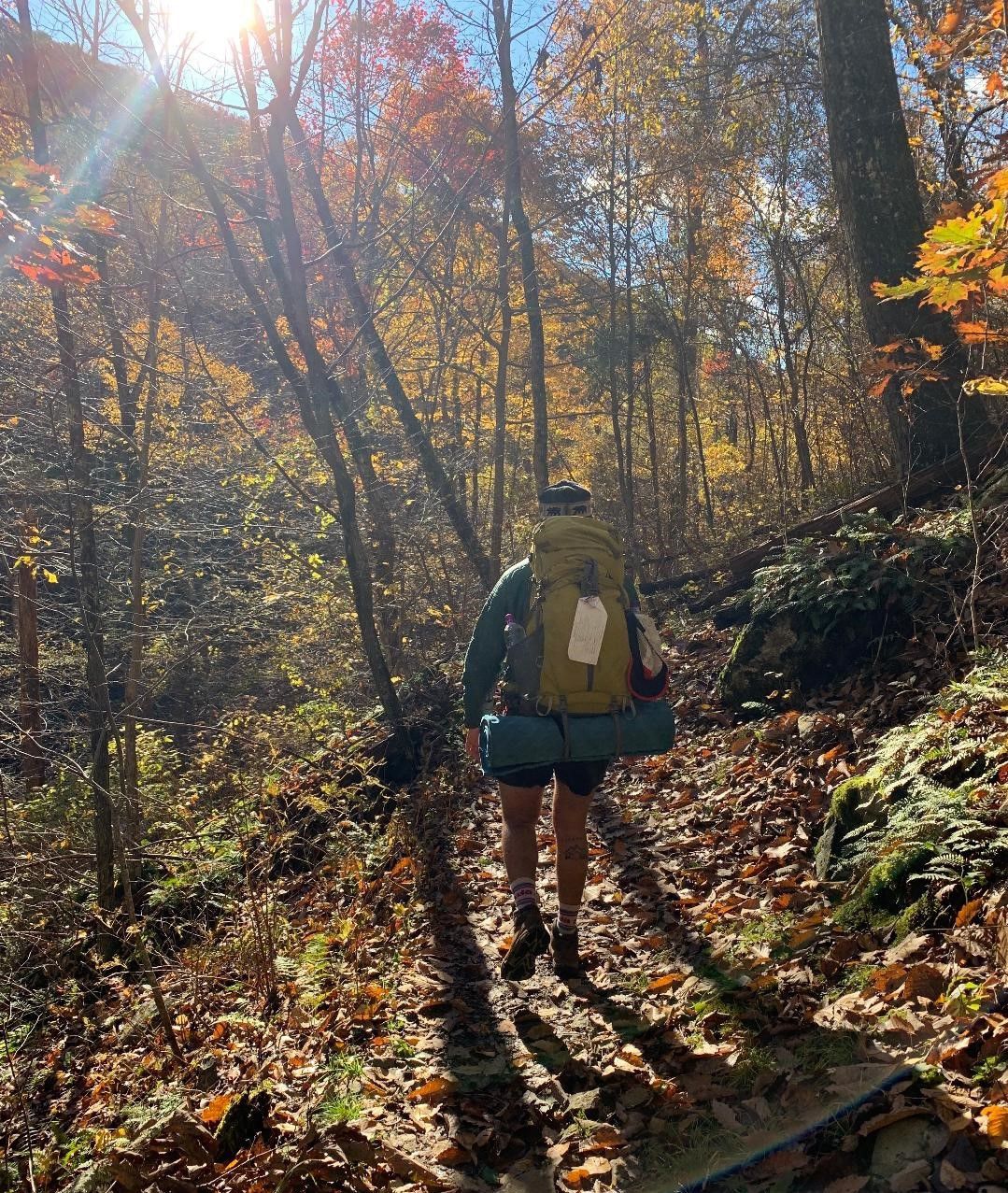 Tilghman Moyer hiked a portion of the Appalachian Trail last year in Pennsylvania. After completing the Semester-A-Trail program at Emory & Henry College this semester, Moyer will transfer back to Temple University where he will finish his senior year in the fall. 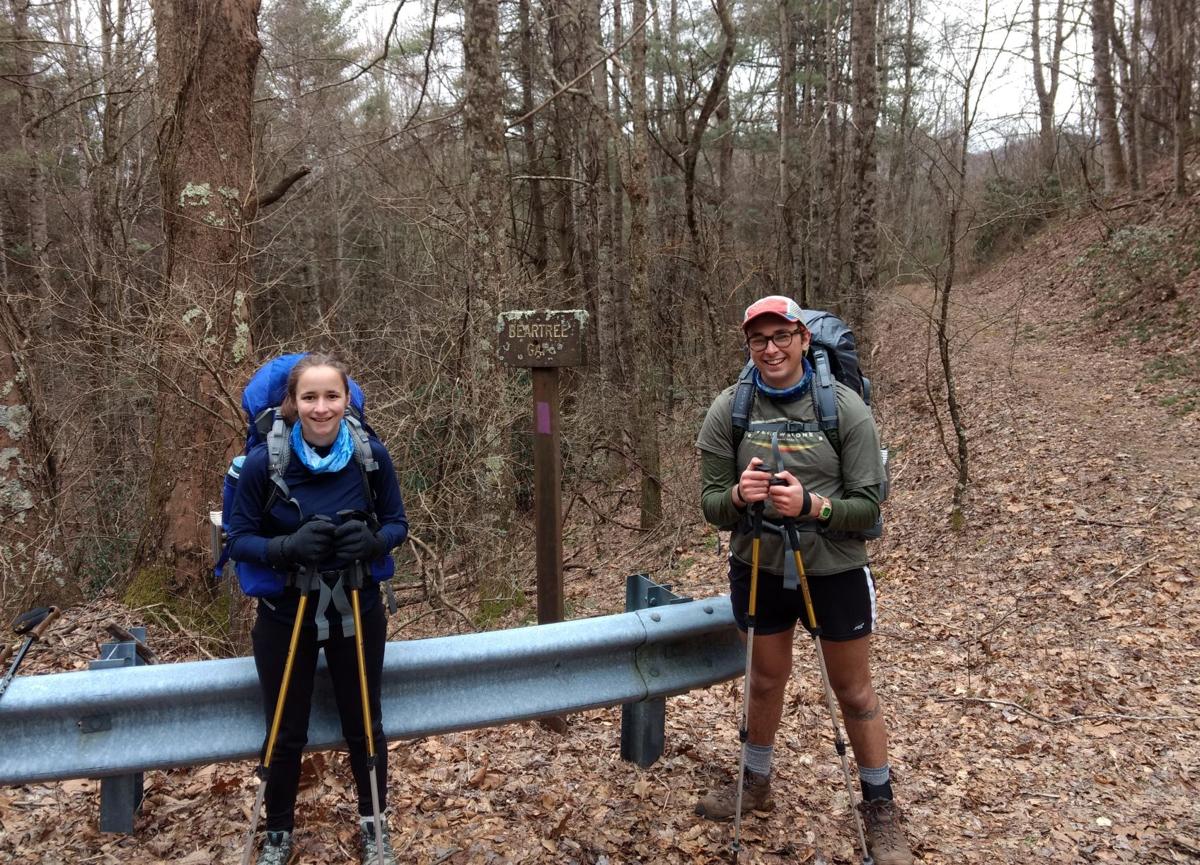 Sadie Burton (left) and Tilghman Moyer will soon begin long treks over the Appalachian Trail — Burton plans a 500-mile stretch ending in Damascus, Virginia, while Moyer will aim for the entire 2,192 miles, ending in Maine. 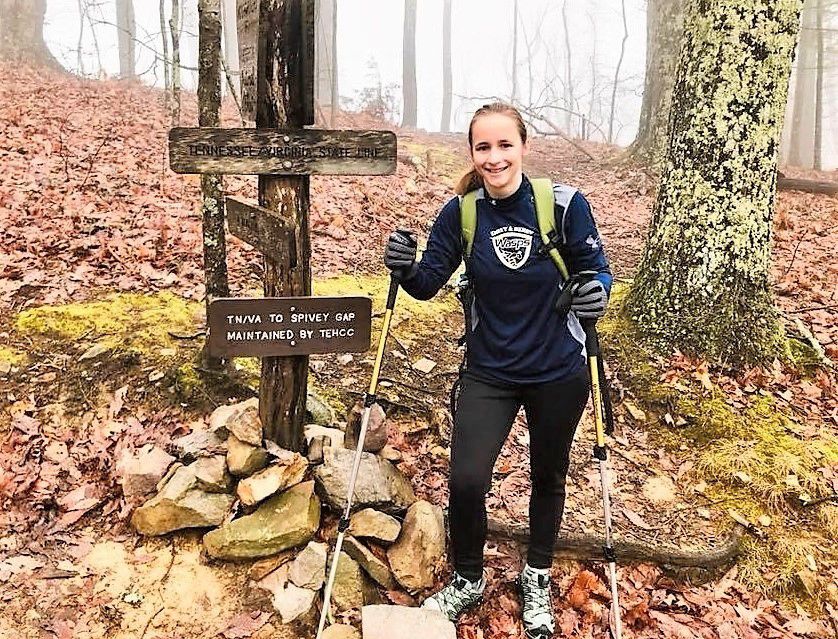 Sadie Burton will soon begin a 500-mile stretch of the Appalachian Trail ending in Damascus, Virginia.

Tilghman Moyer is pictured taking a break while hiking a portion of the Appalachian Trail near his home in Pennsylvania last year.

Tilghman Moyer is the first transfer student to enroll in the Semester-A-Trail program at Emory & Henry College. The program combines academic learning with an outdoor adventure on the Appalachian Trail.

Tilghman Moyer hiked a portion of the Appalachian Trail last year in Pennsylvania. After completing the Semester-A-Trail program at Emory & Henry College this semester, Moyer will transfer back to Temple University where he will finish his senior year in the fall.

Sadie Burton (left) and Tilghman Moyer will soon begin long treks over the Appalachian Trail — Burton plans a 500-mile stretch ending in Damascus, Virginia, while Moyer will aim for the entire 2,192 miles, ending in Maine.

Sadie Burton will soon begin a 500-mile stretch of the Appalachian Trail ending in Damascus, Virginia.

EMORY, Va. — A Philadelphia student is fulfilling a big dream at Emory & Henry College this semester while also blazing the trail for other transfer college students.

Tilghman Moyer traveled more than 500 miles to the college in January just to take part in an outdoor program that culminates with an attempted thru-hike of the Appalachian Trail, the world’s most popular hiking route.

Moyer is the first transfer student to enroll in the Semester-A-Trail program, an experience that combines academic learning with an outdoor adventure of a lifetime — all while earning college credits.

After completing the semester-long program, Moyer will transfer back to Temple University, where he will finish his senior year in the fall.

“We’re the only college program in the country that specifically built an academic semester around an attempted hike on the Appalachian Trail,” said James Harrison, architect of the program and director of the Outdoor Program at the college.

The program, which began in 2006 specifically for Emory & Henry students, is now a draw for students from other institutions who can return to their school of origin after completing the program.

“Tilghman is the first student to take advantage of the transfer program. He’s our model,” said Harrison.

The college has hired celebrated filmmaker and photographer Chris Galloway, based out of Black Mountain, North Carolina, to document the excursions of Moyer on the Appalachian Trail. The film will be used on the college’s website as a marketing tool for the program.

“We want to reach out to every college and college-aged student around the country — if not the world — and let them know they can transfer here for the program and transfer back to their college.”

Last Saturday, Moyer and resident student Sadie Burton, who is also in the program, began the first leg of a northbound journey on the Appalachian Trail at Springer Mountain in the Blue Ridge Mountains of northern Georgia.

The Appalachian Trail stretches 2,200 miles through 14 states from Georgia to Mount Katahdin in Maine.

The students have spent the semester preparing for this day, when Moyer begins a thru-hike of the trail and Burton starts a 500-mile stretch from Georgia to Damascus. With backpacks filled with necessities, the student hikers have relinquished common luxuries for the next few months — things like a warm bed, a hot meal, a toilet and a television.

Both students, who will travel at their own paces, expressed their excitement — and, perhaps, anxiety — as they began preparing for a journey that will test their trekking skills and take them through some of the most amazing views in the world.

Anticipating a gamut of weather conditions along the way, the student hikers are carrying backpacks strategically filled with clothes, jackets and rain gear. Prepackaged noodles, oatmeal, instant potatoes, peanut butter and cheese will offer sustenance until each of them can leave the trail to resupply, take a shower and maybe catch a good night’s sleep in a hostel before their hiking resumes.

Moyer anticipates finishing the excursion in July. Burton said she will be on the trail for about 50 days before reaching Damascus.

Students in the Semester-A-Trail program enroll in 12 semester hours of coursework that prepares them academically and physically for the journey.

“When Tilghman returns to his home, he’s going to carry with him this awesome life journey. He will have engaged in meaningful project-based learning to support his degree and study goals — and the journey that comes along with an Appalachian Trail hike,” Harrison said.

“Hiking an average of 15 miles a day, the thru-hike will be harder than you ever thought it could be, but it will be far more beautiful than you could ever imagine,” said Harrison, who, along with his wife, Aliese, hiked the entire trail in 1997.

The students learned how to engage in nature writing and to be good observers of nature.

“We learn to write in a manner that makes the readers feel like they are in our shoes,” said Moyer.

The Semester-A-Trail program also offers students the opportunity to build independent studies and projects that support their areas of study.

Moyer, who is majoring in environmental science at Temple University, has worked with Dr. Ed Davis, professor of geography, to learn about human geography — the patterns of cultural landscapes. Moyer learned about phenology, the study of periodic plant and animal life cycle events, from Dr. Laura Hainsworth, associate professor of chemistry and environmental studies at the college and also director of the Bartlett-Crowe Field Station.

Burton, who is majoring in creative communications, is completing three independent studies to accompany her hike. Her project entails a documentary project that focuses on gratitude, documentary photography and nature writing.

Before the hike began, students engaged in a hiker preparation program that focuses on physical training, nutrition on the trail, skill-building, backcountry cooking, purification of water on the trail and other problem-solving skills.

Gaining familiarity with these things, the students went on an earlier shakedown hike, a shorter backpacking trip in preparation for the long trip on the Appalachian Trail.

Moyer said he searched other colleges online until he found the Semester-A-Trail program at Emory & Henry. “Growing up in the city, I’ve always been attracted to the outdoors. There was a patch of grass outside our townhouse in Philly. I wanted to be somewhere that was fresh, green and lush.

“I can’t pinpoint what I want to do with my environmental science degree, but I hope my hike on the Appalachian Trail will help me figure out some things.”

Burton, who grew up on a farm in South Carolina, said a 50-mile hike on the Appalachian Trail when she was in high school whetted her appetite for adventure. In middle school, she developed a love for photographing nature.

Burton recommends the adventure to other students. “But students need a good work ethic. We have access to resources and help on the trai, but we’re on our own for the most part. We have to hold ourselves accountable.”

Meeting new people and building relationship are paramount objectives in the program.

“I’m really looking forward to meeting the people — not just the people on the trail but the people in the towns,” said Moyer. “People all over the world attempt to hike the trail every year. The weekend we’re starting is one of the busiest weekends this season.

“For anyone who is on the fence about taking a journey that’s very daunting, just do it. It can be scary, but it’s also awesome. The unknown is such a cool place to be.”

Harrison said communing with nature is a spiritual thing — appreciating sunrises and the sound of water.

“In today’s society, we spend so much time in artificial environments, but there are so many wonderful discoveries to be made when you forest. Your senses awaken, and you have real conversations with people.”

He hopes the students come away from the experience with elevated senses and a stronger connection to the earth.

“All of the things that you need to be happy in this world can fit into a simple backpack.”