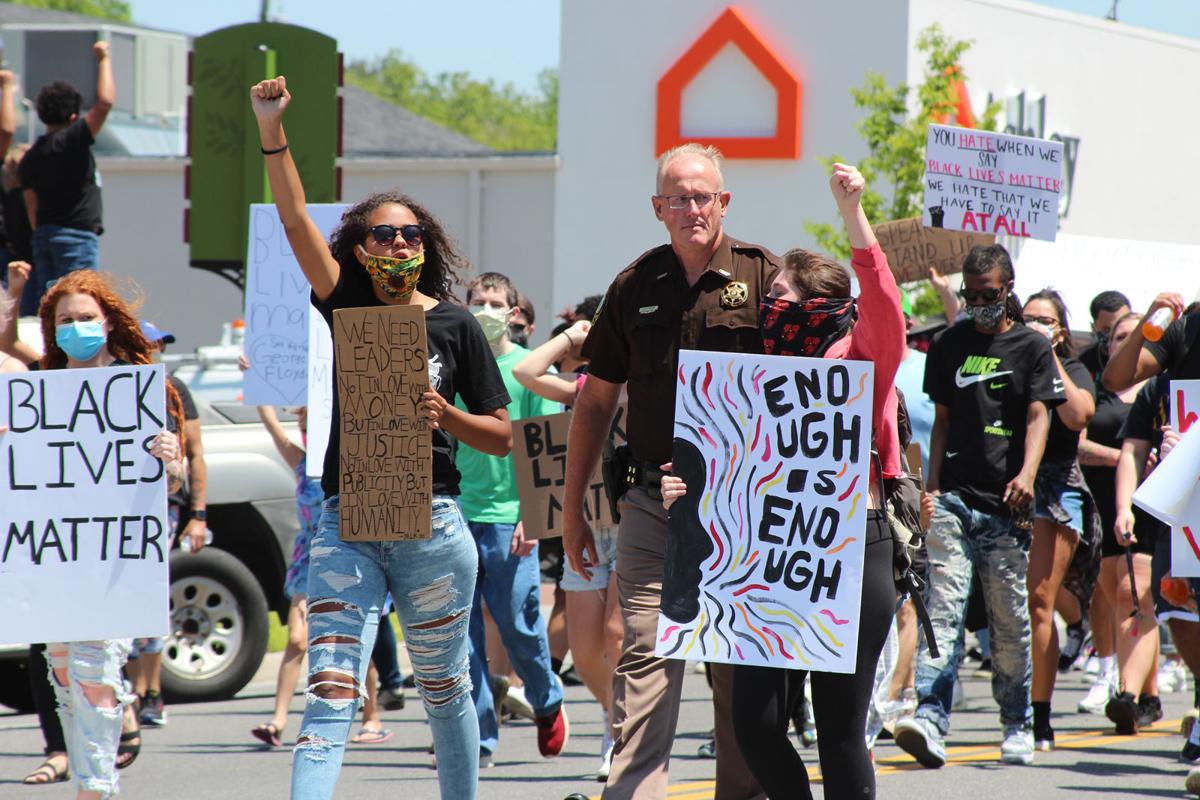 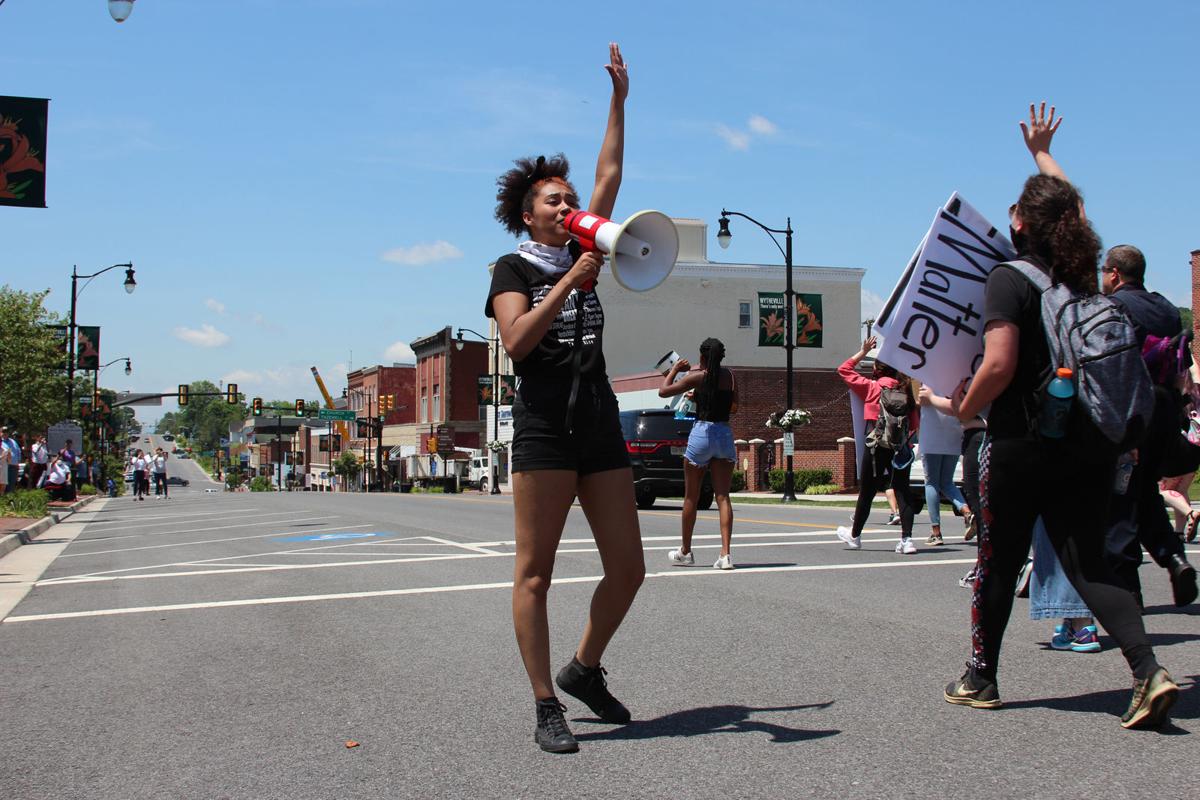 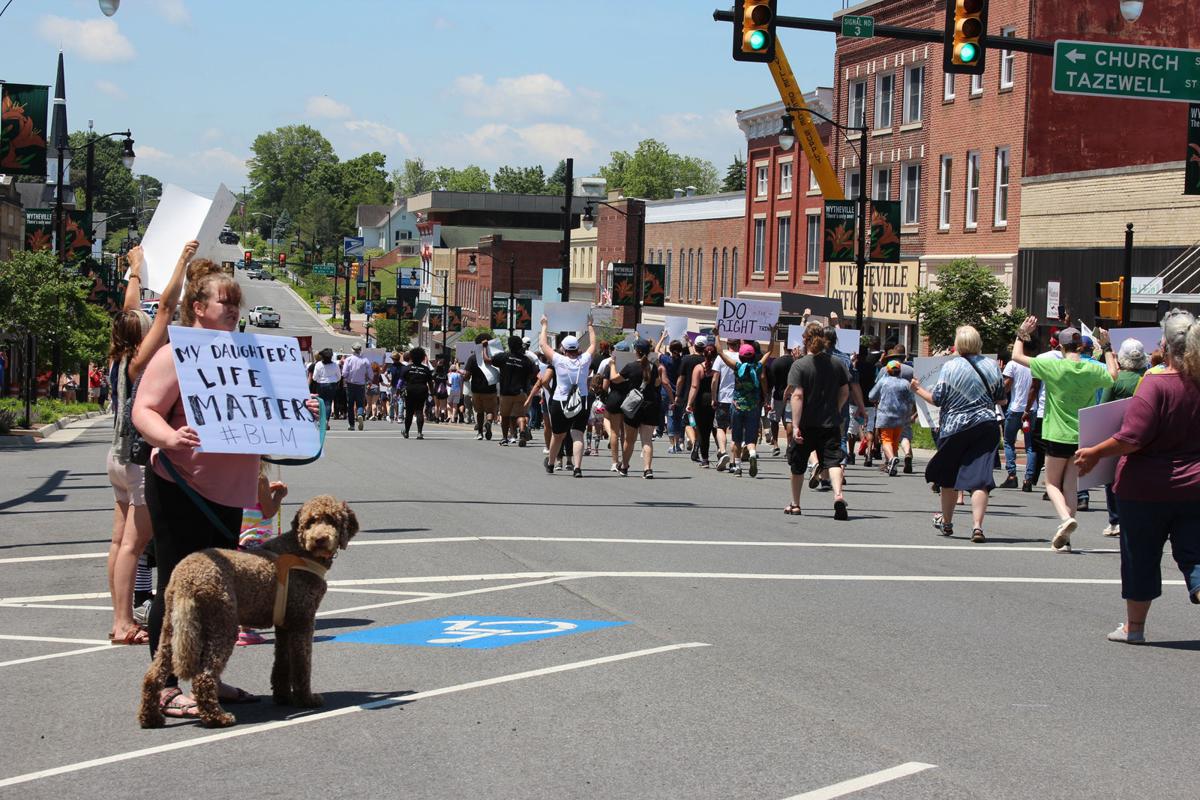 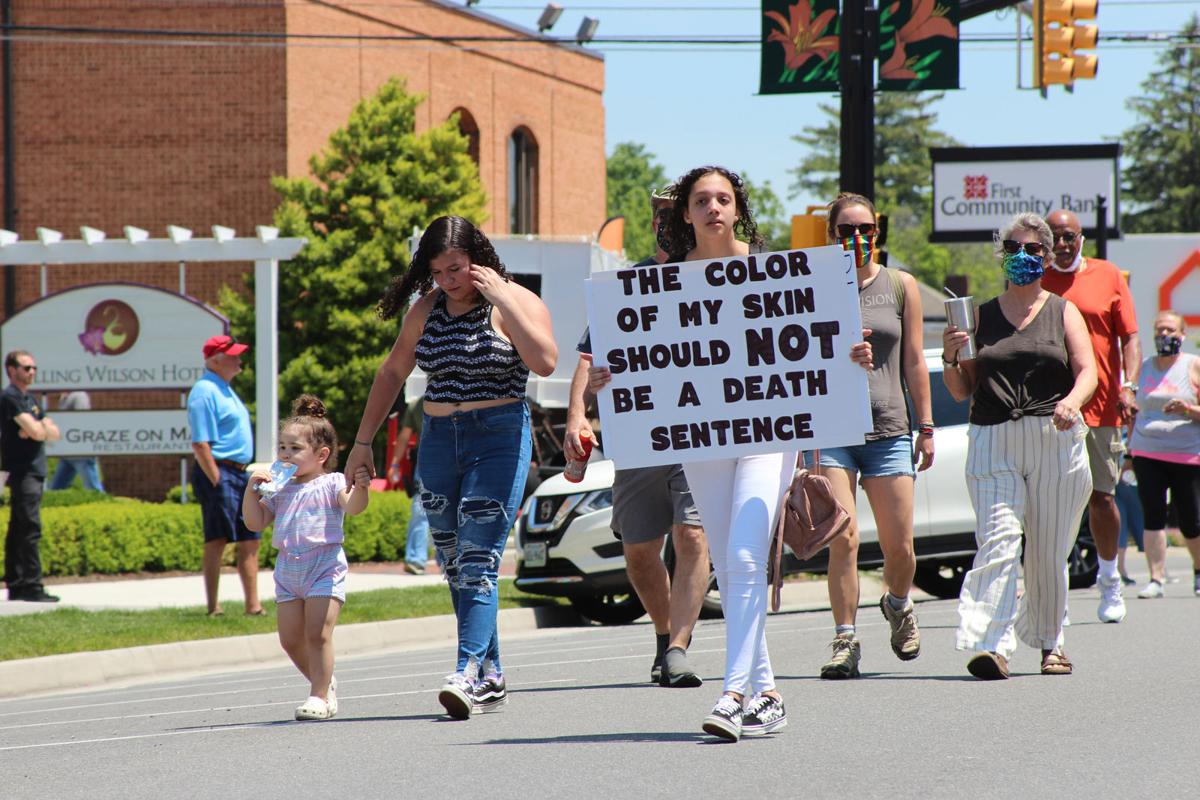 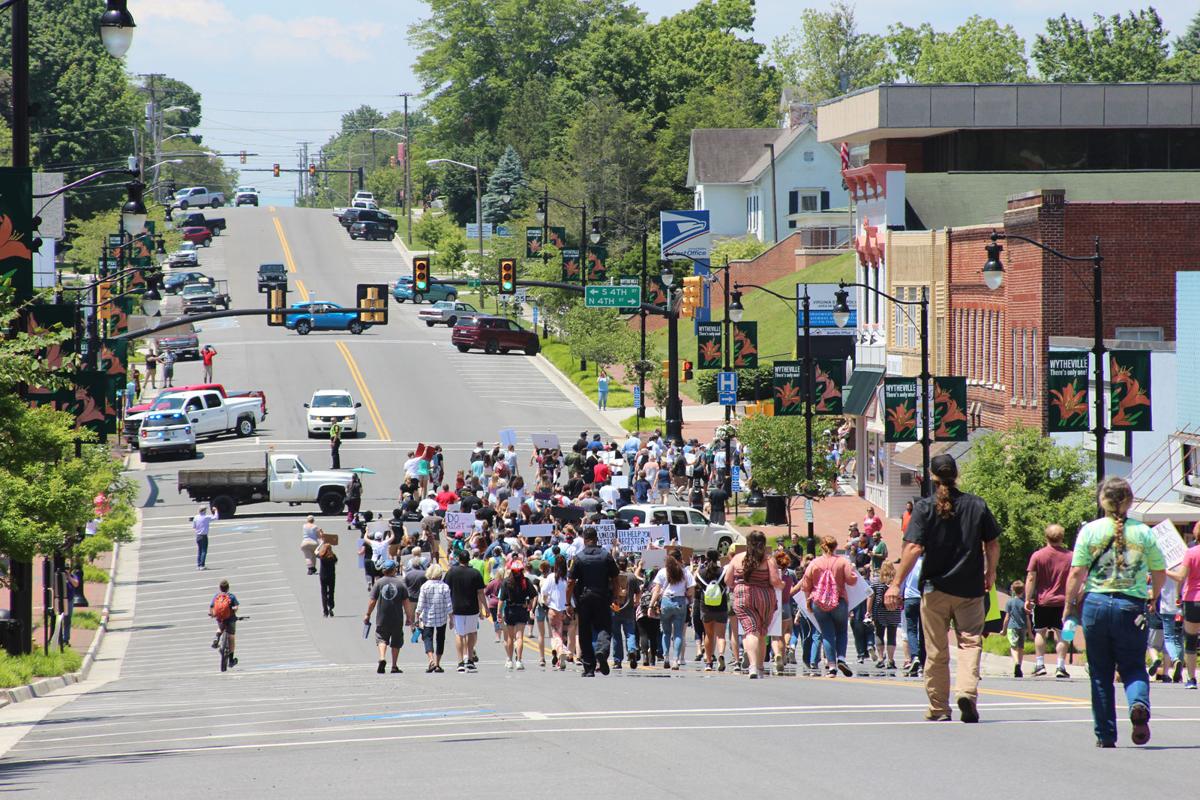 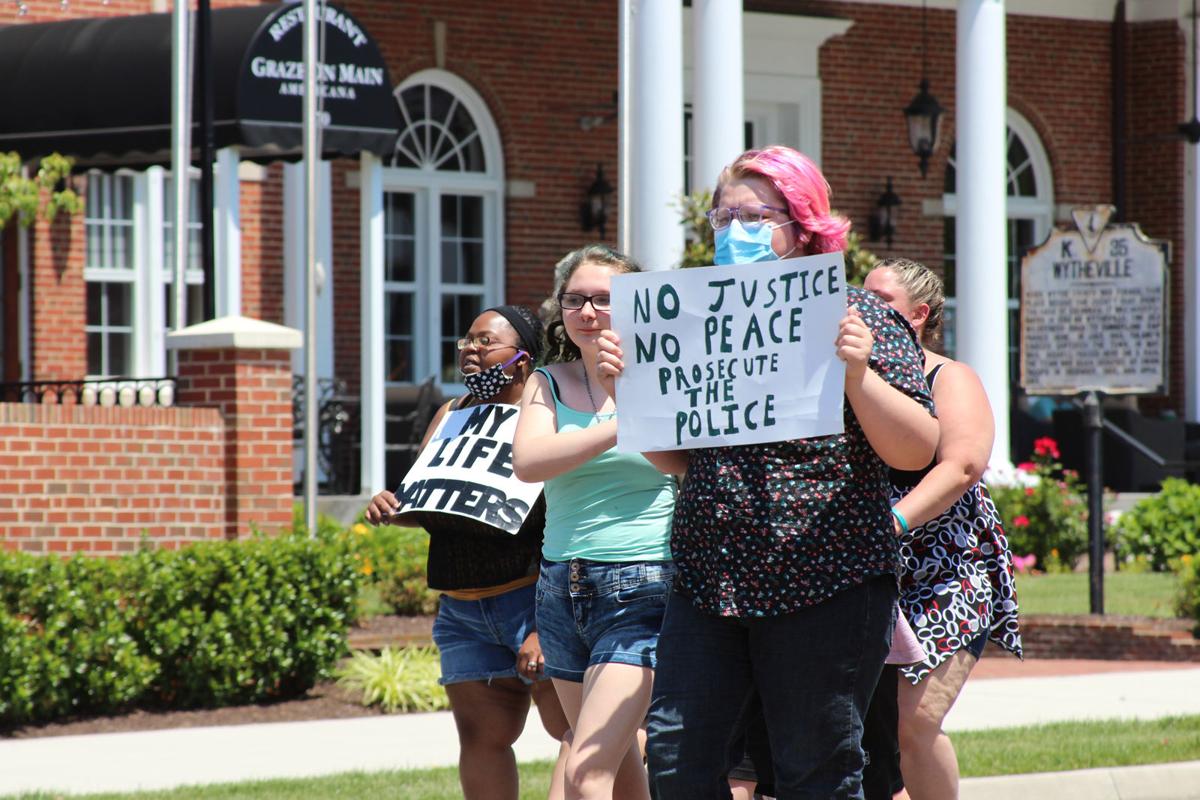 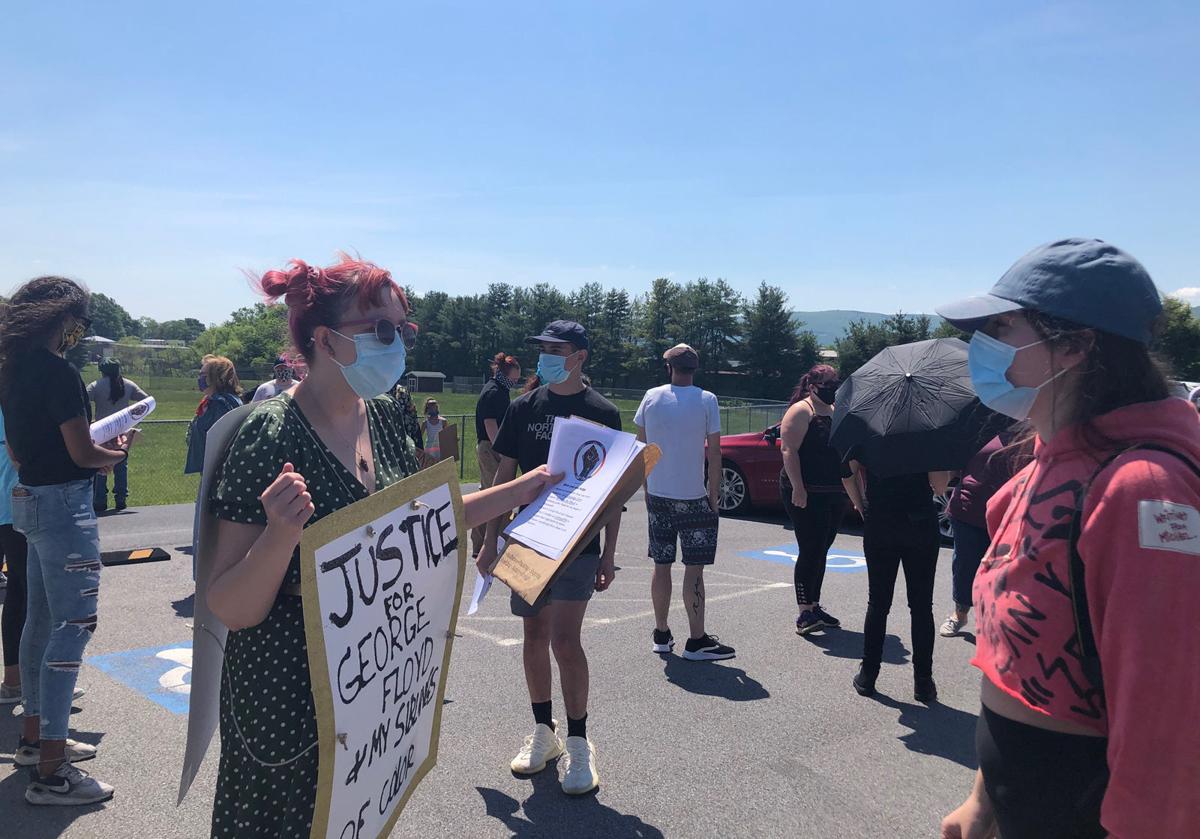 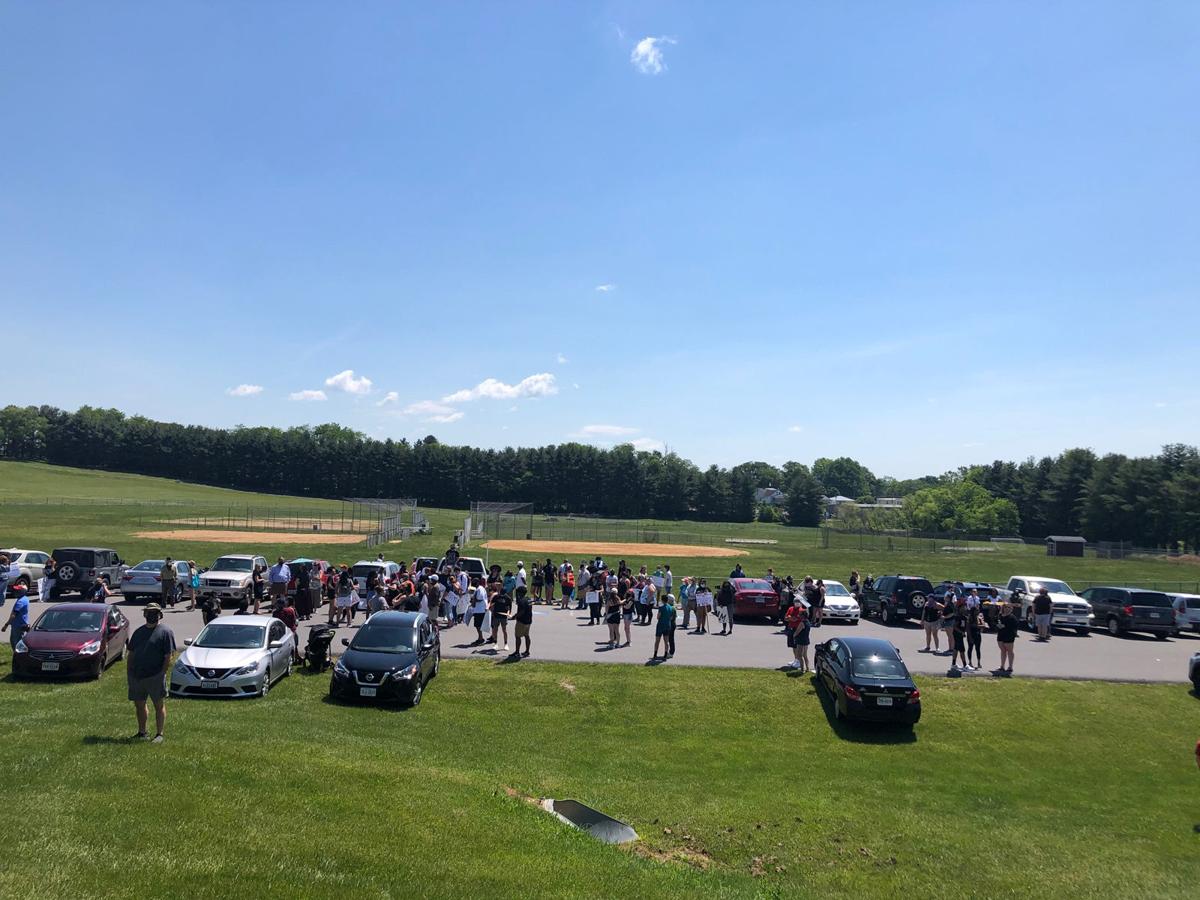 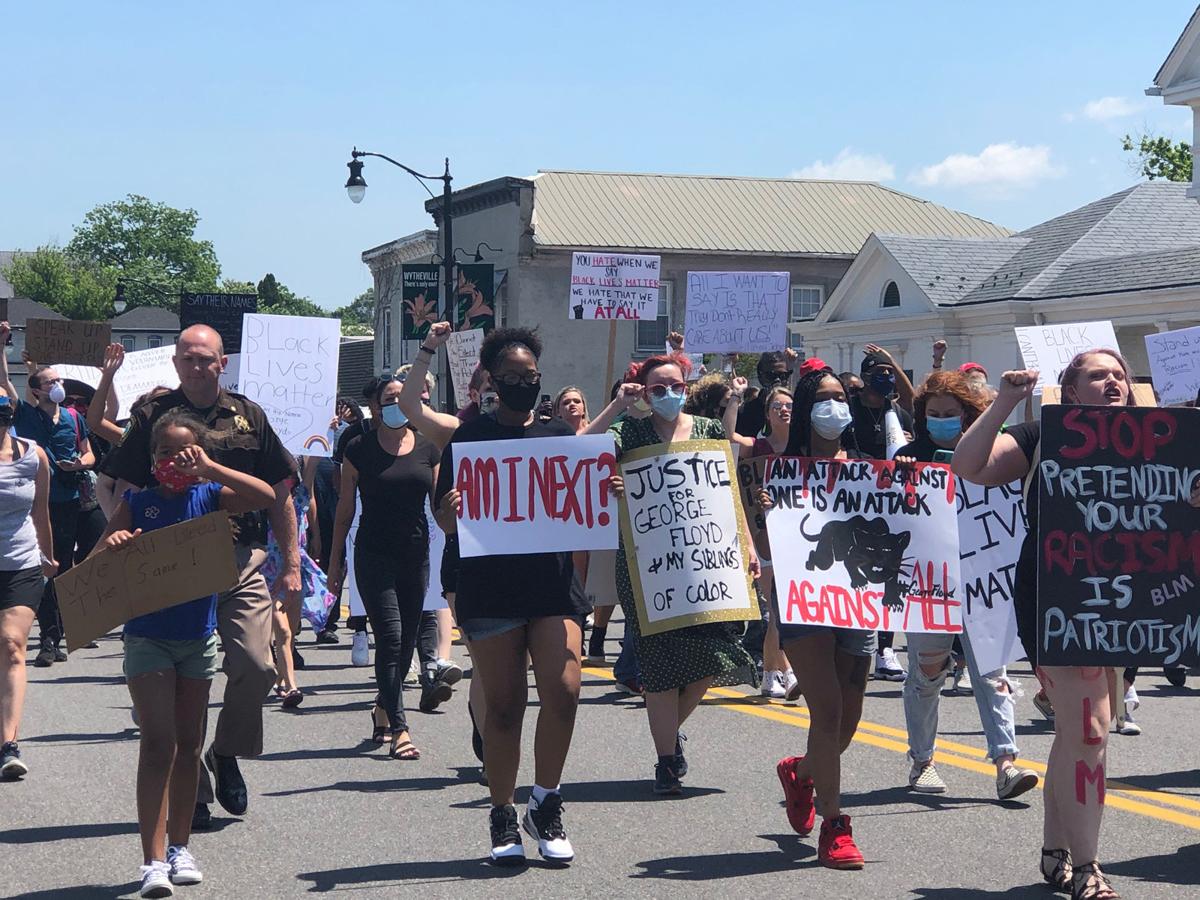 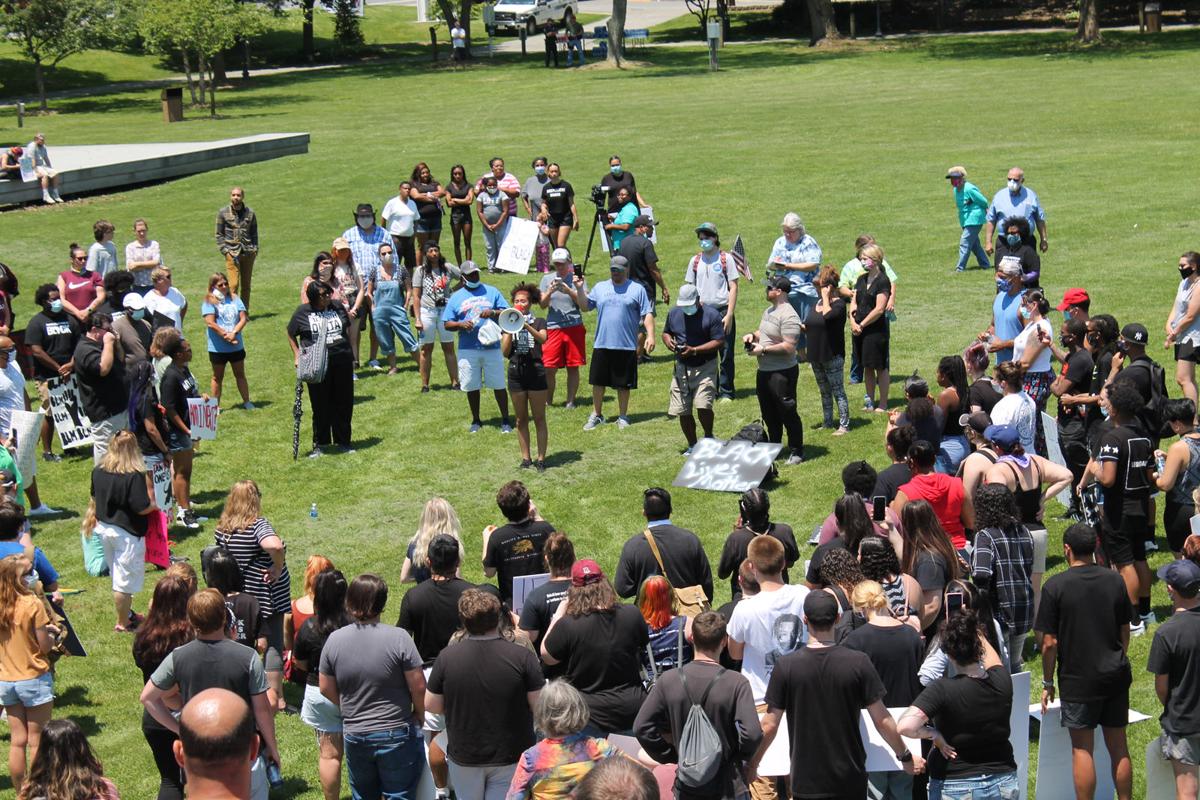 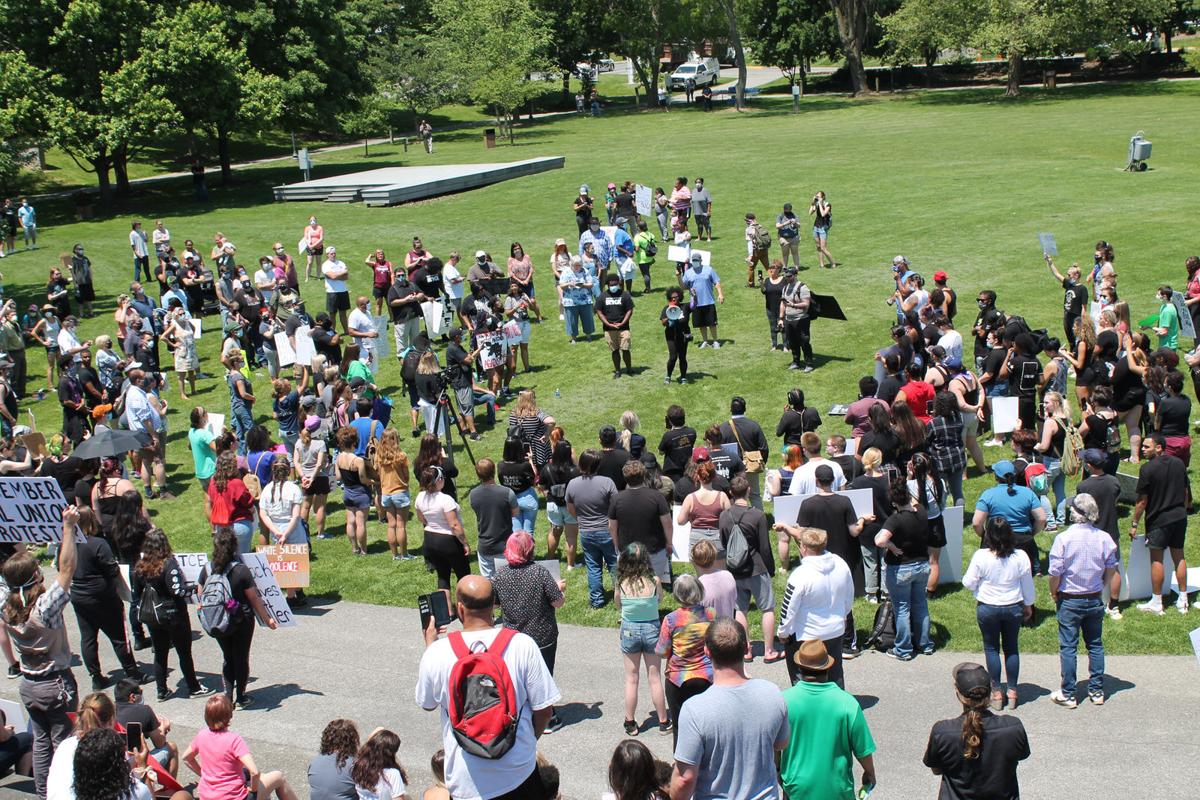 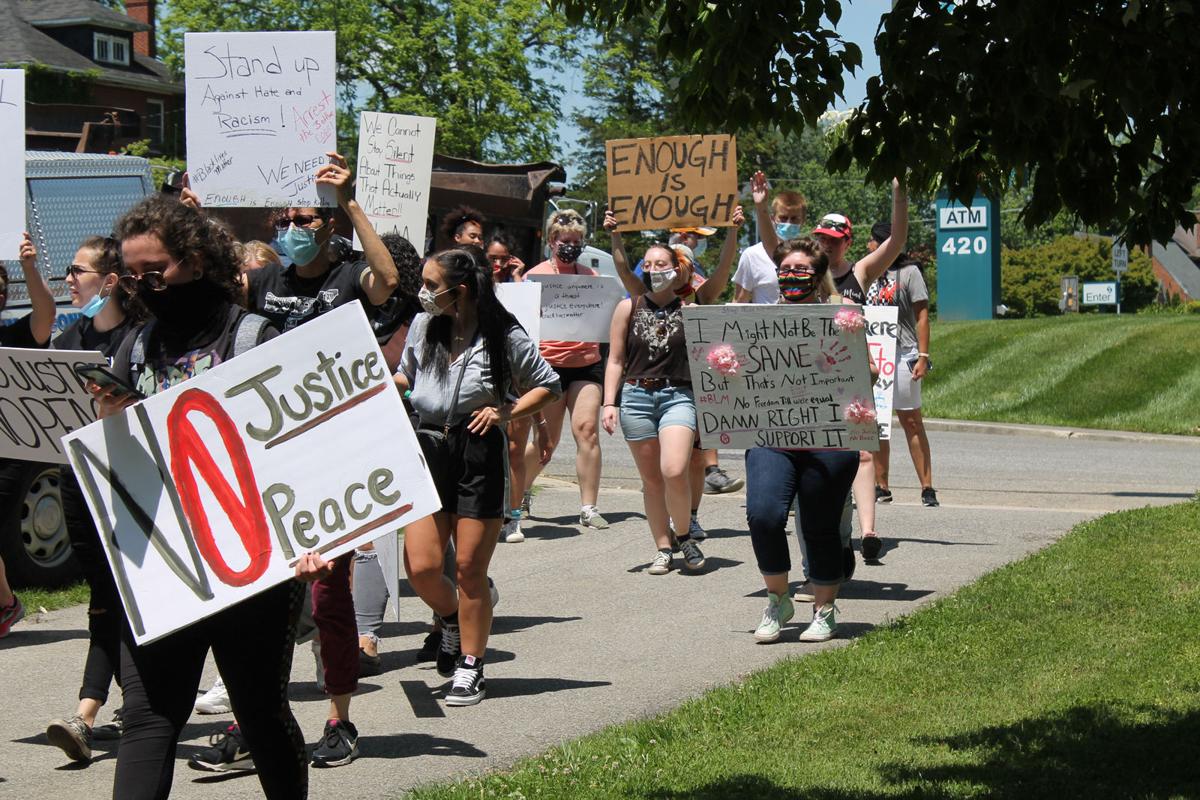 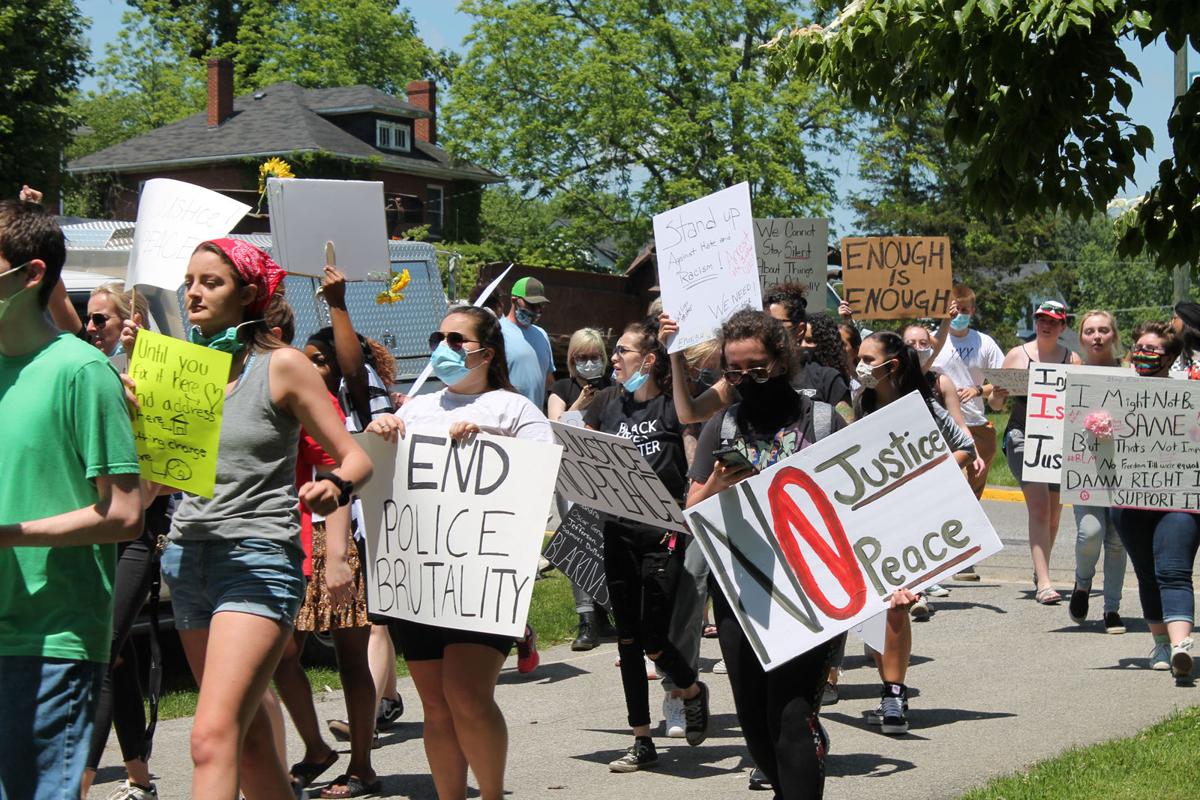 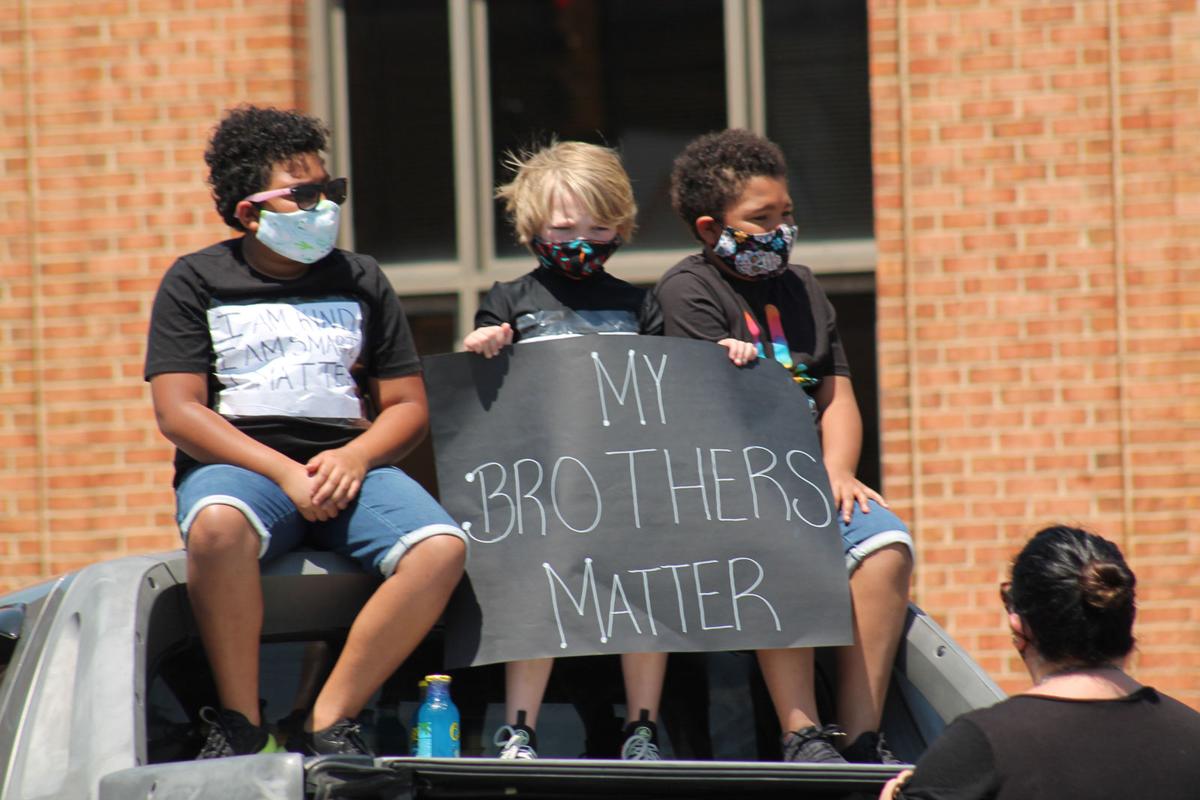 Click on the gallery for photos from Tuesday's march. There is also a video of the event. All photos and video by Millie Rothrock, Jasmine Dent-Franks and Jeffrey Simmons

By the hundreds they came to Wytheville Tuesday to protest racism and police brutality against African Americans in the memory of George Floyd, a black man who died in police custody in Minnesota last week. Organizers and police wanted a peaceful march and they had one.

The ending said a lot. Everyone – black, white, young, old – posed for a group photo in Withers Park.

The Peaceful March for Black Lives Matter began at noon from the Al Jennings Field at Wytheville Community College. At 11 a.m., about 30 people and a handful of police officers gathered in the parking lot. Last night, when organizers met with local law enforcement officers, they estimated there would be about 100 people at the rally. At noon, more than 300 people marched into downtown.

Melinda Long of Wytheville marched in honor of her boyfriend, who is mixed race and often scared to go out, she said. Her friend, Amy Dalton, was there to “stand up for my brothers who are being killed.”

Another marcher said the country’s justice system is broken and needs to be rebuilt.

“It’s not a legacy I think is worthy of our country,” she said. “We are horribly divided, but I think most people want to do better and stand together. People need to stand together and solve problems and vote and work in elections to get things done.”

Holding signs and chanting Floyd’s name, the crowd walked down Main Street, onto Fourth Street and into Withers Park. As they passed, people dotted the sidewalks, some passing out water to the protesters.

The march was organized by a group of young women, including 18-year-old Lauryn Lampkins, Lindsey Neal and local art gallery owner Lily Formato. They said when they realized no one was going to protest Floyd’s death locally, they decided to take action. Formato created a poster advertising the rally and over the weekend it spread like wild fire over social media.

“I wanted to make something happen,” Lampkins said.

The women said they were protesting ongoing issues that need to stop – like police brutality, unjust murders and underlying racism that exists throughout the country and in Wytheville and Wythe County.

“We’re here for a good cause – solidarity and to bring people together,” Formato said. “We have a vibrant black community here and we feel it should be celebrated.”

At Withers Park, several people spoke, including local leader Glenda Crockett-Eans, who said she is a woman of God and knows that God is not with killing and brutality.

“He is with us now because we walked down the street peacefully,” she said.

Crockett-Eans, the mother of two sons, said every time they go out, she prays for them to return safely. She urged members of the crowd to register to vote.

“Because this has to stop,” she said. “I don’t want my children coming home in a bag. I don’t want that.”

Crockett-Eans said she is unapologetically black.

“If something was wrong with us, God would not have put us here,” she said, adding that African-Americans came to America involuntarily.

“But we need to make the best of it,” she said. “We need our allies … use your voice and stand up for what is right. Black people don’t vote – you have to vote. Silence is the problem.”

Organizers wanted Wythe County – home to one of the nation’s last lynchings – to be a model for other cities and towns on holding a peaceful rally, one where protesters, town officials and law enforcement officers work together. Four uniformed law officers – two from the Wytheville Police Department and two from the Wythe County Sheriff’s Office – marched in the rally.

Longtime police officer and interim Wytheville Police Chief Joel Hash also marched alongside protestors. Before the rally, he handed a megaphone to a marcher so everyone could hear the message loud and clear.

During the meeting Monday night, Hash said organizers assured town officials that they wanted the march and message to be powerful and nonviolent, with no disruptions from outside forces.

“And we assured them we are with them and by their side,” he said.