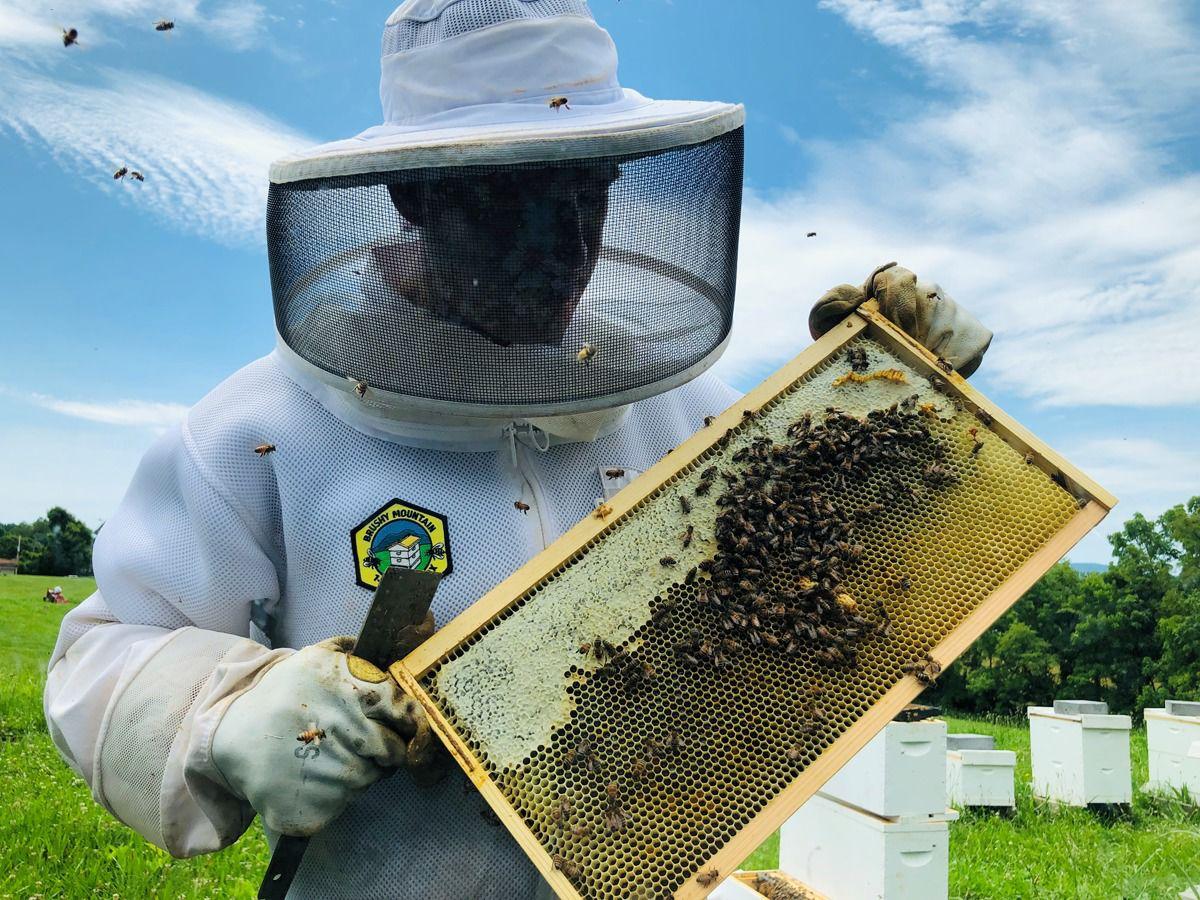 Dressed in a protective bee suit, Jeremy Blackwell holds a frame of honeycomb made by bees on his Abingdon property. 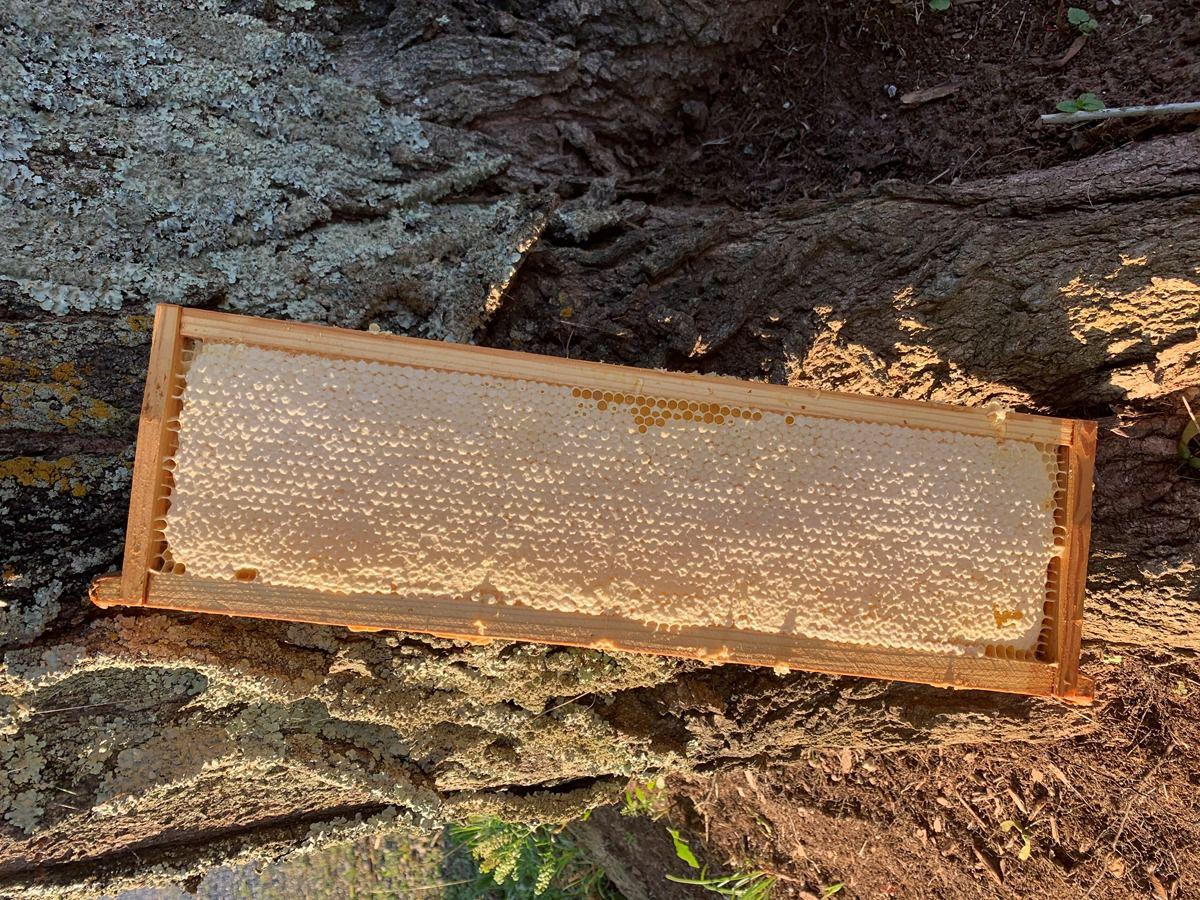 The work of honeybees is nature’s best artwork. 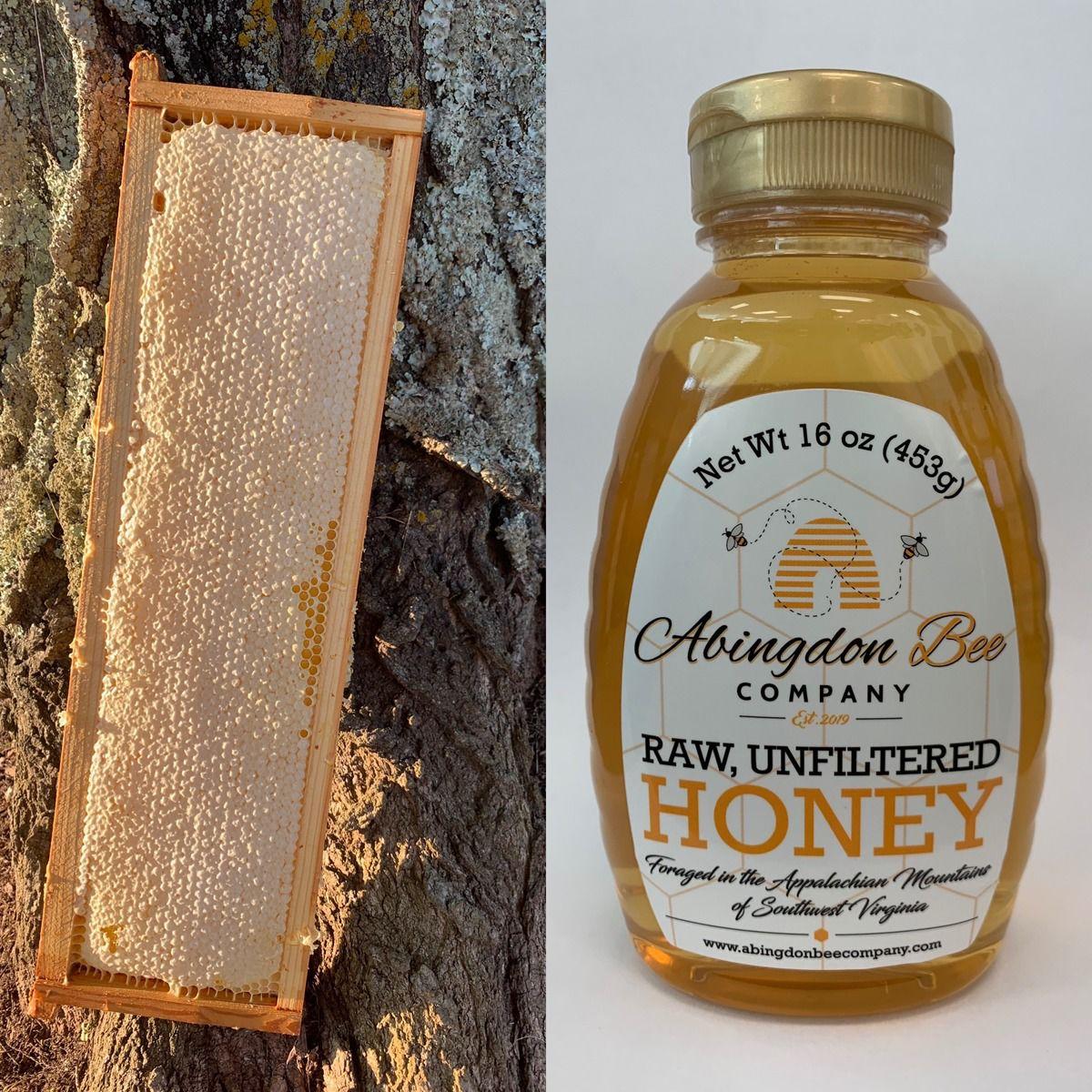 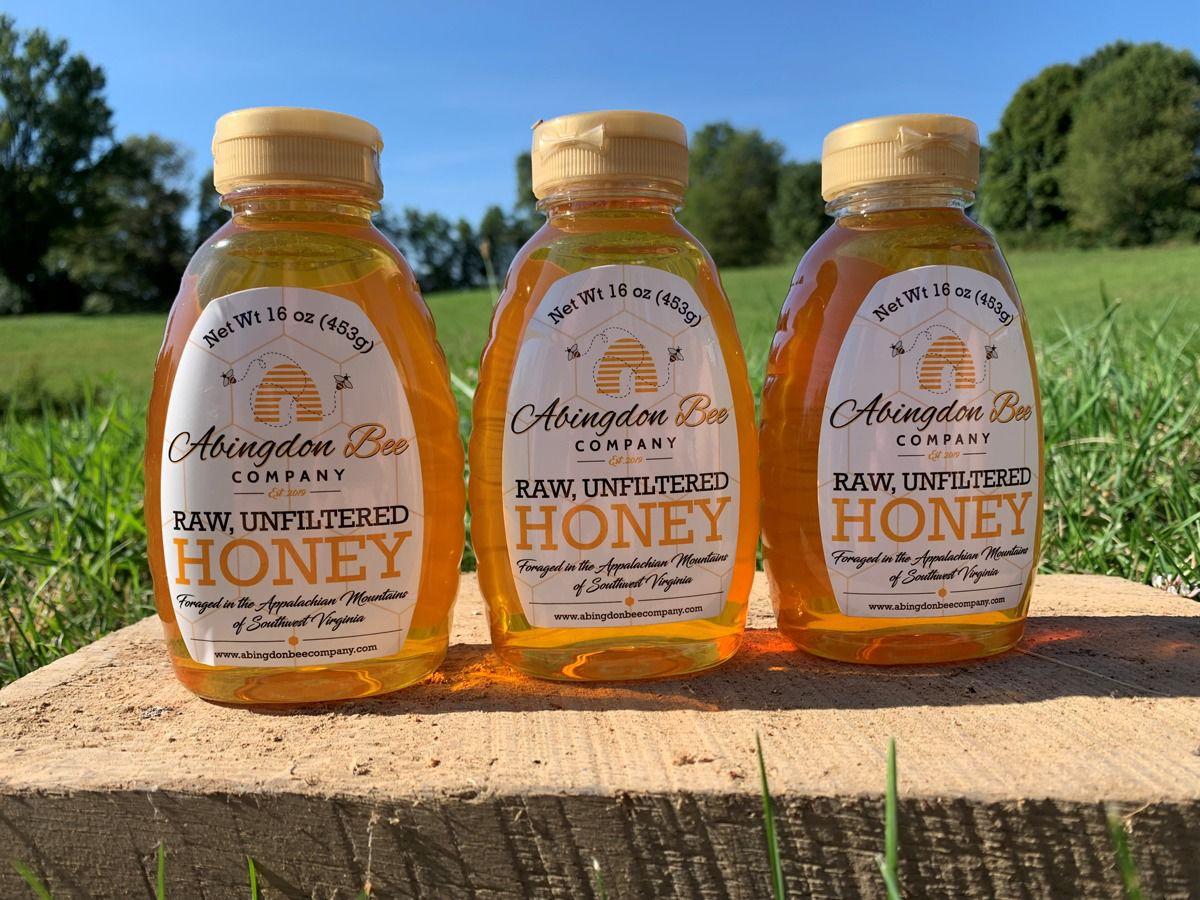 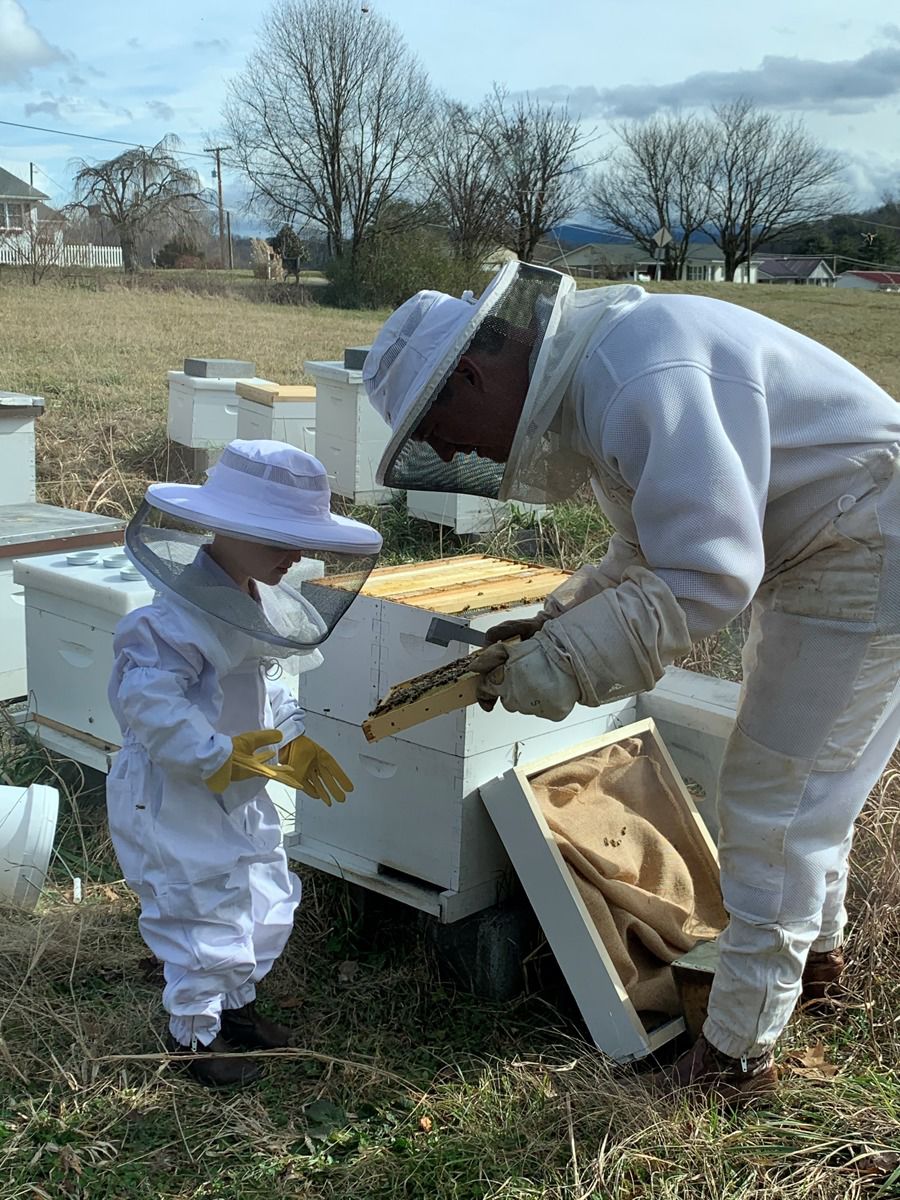 Graham Blackwell gets a lesson in beekeeping from his father Jeremy Blackwell. 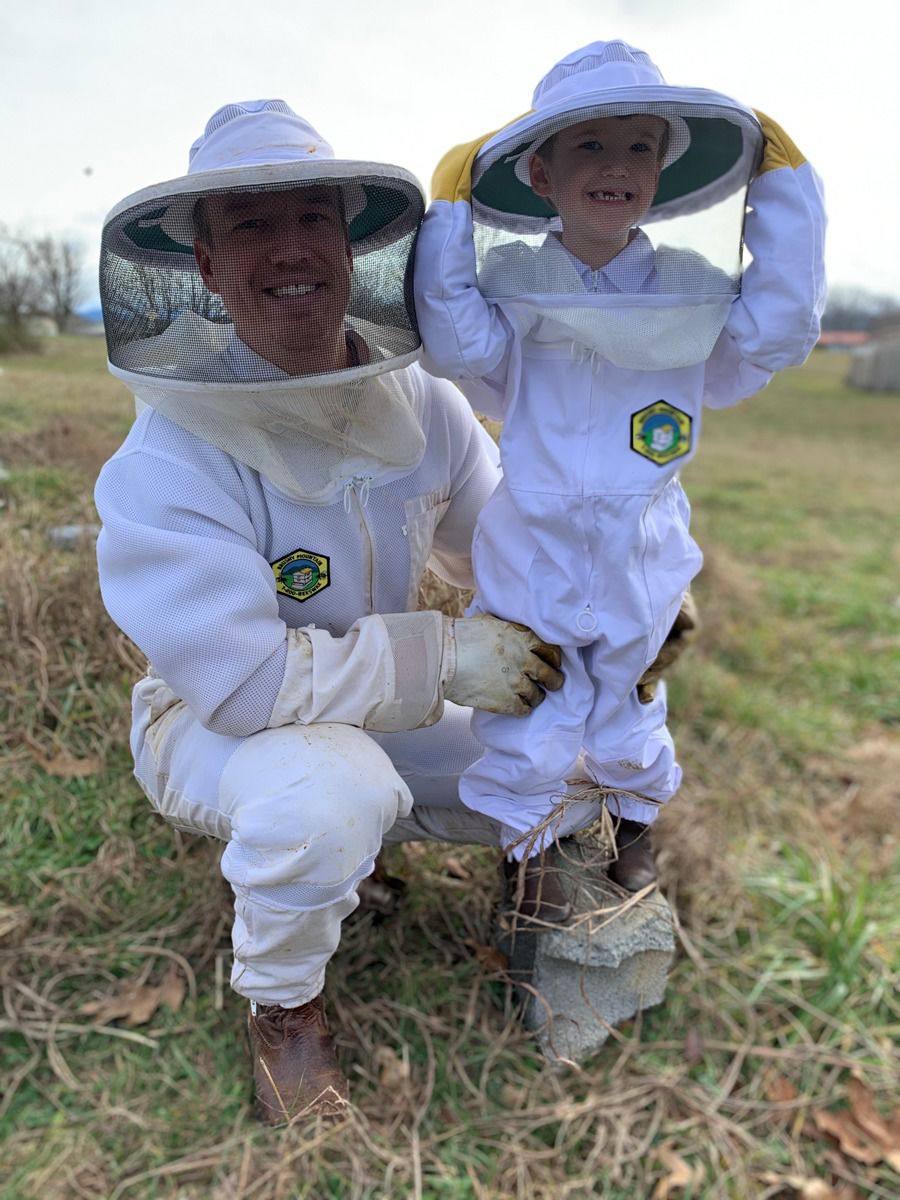 Jeremy Blackwell and his son Graham wear protective outfits while near the bee hives.

Dressed in a protective bee suit, Jeremy Blackwell holds a frame of honeycomb made by bees on his Abingdon property.

The work of honeybees is nature’s best artwork.

Graham Blackwell gets a lesson in beekeeping from his father Jeremy Blackwell.

Jeremy Blackwell and his son Graham wear protective outfits while near the bee hives.

ABINGDON, Va. — This time of year, Jeremy Blackwell is buzzing around his Abingdon bee farm, harvesting what some people call “liquid gold” — honey.

Blackwell, who started Abingdon Bee Co. in 2019, said he should have collected 1,000 pounds of the sweet stuff in the next few weeks before the harvest ends.

That translates to several hundred containers ready to sell to his customers.

That may sound like a lot of honey, but this year’s crop won’t be anything to create a buzz.

According to Blackwell, a wet and cold spring is to blame for his decreased production of honey.

“Honey is made from nectar. When it’s cold and wet, flowers and other crops do not bloom as normal, which directly affects nectar production,” Blackwell explained.

“Last year was an exponentially great year for honey. Bees were producing over 100 pounds of honey per hive.

“However, this year has been an exponentially bad year for honey. I’ll be doing well to get at least half of the amount I harvested from last year’s crop.”

The local beekeeper sells half-pound to five-pound plastic and glass containers of raw, unfiltered honey. Honey often found on grocery store shelves is pasteurized, meaning it’s heated to high temperatures, killing all the health benefits of the honey, and even at times adulterated with corn syrup, he said.

Raw honey — honey that is not pasteurized — is believed to have many medicinal properties. Researchers believe honey offers an antibacterial action, wound-healing effects, dietary antioxidants and anti-inflammatory benefits.

Blackwell and his family no longer use refined sugar. Instead, they sweeten foods with raw honey he harvests, which, he said, is a much healthier option.

Many people believe that eating local honey will alleviate allergy symptoms. The beekeeper hopes to see more research to help put more science to this belief.

He also offers comb honey or chunk honey, which is a hunk of honeycomb submerged in a jar of extracted honey.

“Some people like eating honeycomb with honey. The aesthetics of the product make it nice gifts for people.”

Blackwell had planned to supply local businesses with his raw honey this year, but not all locations may get to participate.

“I’m not certain if I will have enough honey to supply all of the businesses. That’s basically the mission of Abingdon Bee Co. — to be a local source of honey for people year round.”

Despite the setback this year, he has ambitious plans for the business. His goal is to expand his apiary, doubling the number of hives each year. Forty hives this year may mean 80 hives by next spring, he said.

The beekeeper is committed to helping other hobbyists in the area and plans to offer the service of extracting honey to other beekeepers, using his commercial equipment.

“I realize the equipment needed to harvest honey can be a major hurdle for anyone getting started,” he said.

Beekeepers also can use the honey processing room at Blackwell’s shop to extract and bottle their own honey. Another option is to drop off their honey to be extracted into buckets or bottled in sealed containers, for a reasonable price.

In the future, Blackwell is interested in forming a honey cooperative where local beekeepers would sell their honey to Blackwell. He would work with each producer to bottle and label the products, telling their stories and providing hyper-local honey to the community.

For now, the beekeeper is focused on making the best of this year’s honey crop. It’s a meticulous job but one that he enjoys.

Honey that is harvested on his farm is uncapped, extracted, then run through a strainer to remove the honey from the comb. Blackwell returns the comb to the hives to allow the bees to start rebuilding.

“This saves the bees a tremendous amount of time and energy,” he said.

The clean honey is loaded into bottling tanks and gently heated to between 90 and 100 degrees to help with bottling and slow the process of crystallization. Crystallized honey is still good honey and can be gently heated in hot, not boiling, water to reliquefy.

“If honey is heating beyond 140 degrees, it destroys all enzymes and health benefits. Basically, you’re left with just sugar syrup,” Blackwell said.

Next, the honey is poured into containers and labeled. He wears gloves and an apron while pouring the honey into sanitized bottles. “This has become ever more important during the pandemic.”

“Beekeeping may be hard work, but I will say it has many sweet rewards.”

Honey from Abingdon Bee Co. can be purchased online at www.abingdonbeecompany.com. Arrangements can be made for customers to pick up curbside orders at his shop. Deliveries are available within a 20-mile distance.