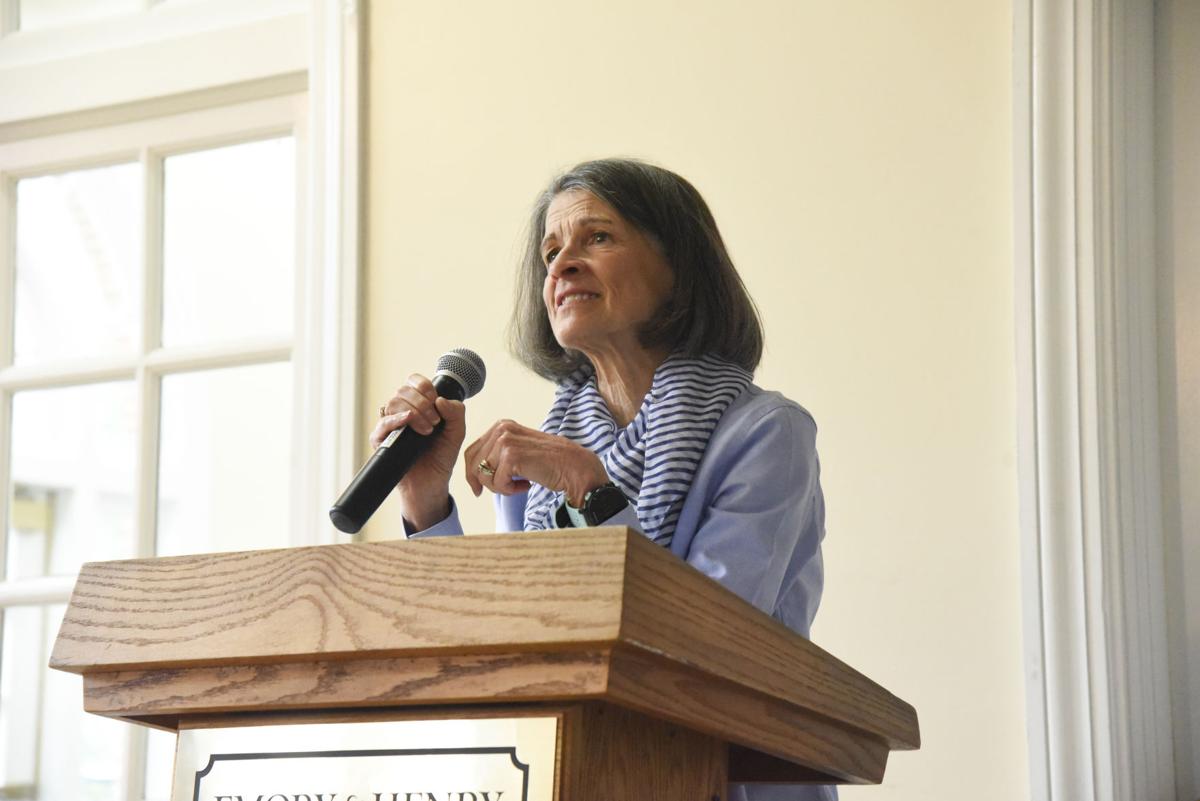 Joy Scruggs speaks at a dinner honoring her work as a faculty member and coach at Emory & Henry. 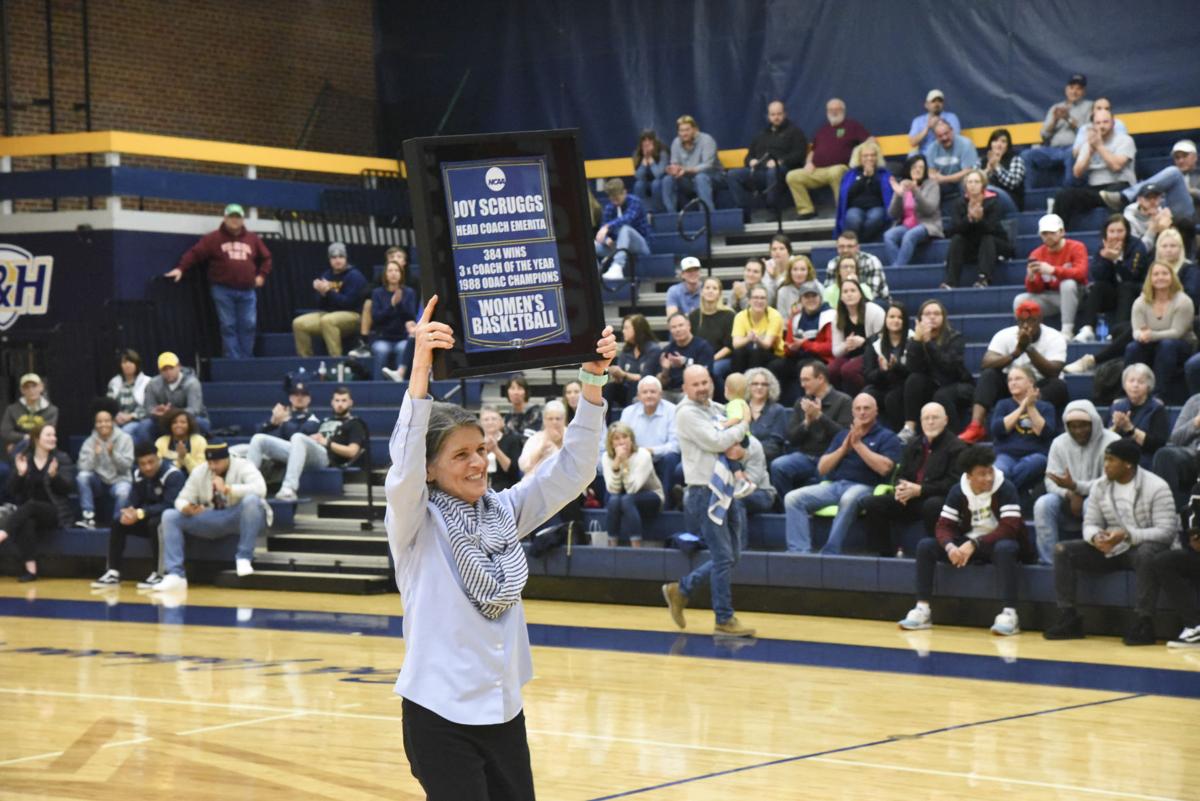 Joy Scruggs, retiring faculty member and former women’s basketball coach for Emory & Henry, holds up an award she was presented with during a basketball game against Randolph-Macon College.

Joy Scruggs speaks at a dinner honoring her work as a faculty member and coach at Emory & Henry.

Joy Scruggs, retiring faculty member and former women’s basketball coach for Emory & Henry, holds up an award she was presented with during a basketball game against Randolph-Macon College.

EMORY, Va. — Quoting her own familiar hashtag, it was an “Emory Proud” day for Joy Scruggs recently when the Emory & Henry community recognized her legendary career at the college.

Scruggs said she couldn’t have dreamed a better day than the one that took place earlier this month during Women’s Basketball Alumni Day at Emory & Henry College.

“It was a big surprise how everything turned out,” said Scruggs about the event. “It was wonderful on all accounts.”

John Wells, president of the college, presented a resolution approved by the college’s board of trustees declaring Scruggs the first-ever “head coach emerita.”

During a luncheon celebration, the Washington County Board of Supervisors officially declared Feb. 1 Joy Scruggs Day in the county. Other presentations included the reading of a poem written by her colleague Beverly Sheddan in honor of Scruggs. Del. Israel O’Quinn presented a special resolution from the Virginia House of Delegates honoring her retirement.

The event also included several videos from former basketball players who were not available to attend the event, including Toni Atkins, a 1984 graduate of the college, who serves as a leader of the California State Senate. Kay Pondexter, a former player from the class of 1984, also spoke.

“I think one of the keys to Joy’s passion for coaching and teaching is that she is a person who has passion for life in general. She commits enthusiastically and fully with everything she does,” said Kathleen Chamberlain, English professor at the college, who attended the event.

“It’s a cliché to say the Emory & Henry just won’t be the same without her, but clichés are often true.”

Standing 5 feet, 3 inches, Scruggs may be petite in size, but her enthusiasm for teaching and coaching basketball has made a huge impact on and off the court.

“For me, coaching was as much a spiritual thing as anything else,” said Scruggs, who became the head women’s basketball coach at Emory & Henry in 1981, leading the program to a total of 384 wins, 19 winning seasons and an ODAC championship in 1988. She led the Wasps to 22 ODAC tournament wins and five appearances in the ODAC championship game.

After retiring from coaching in 2009, Scruggs designed a course to take Emory & Henry students abroad so that they could understand sports from a wider cultural perspective, titled — with her trademark humor — “The Wide World of Sports.” Scruggs has taken students to England, Spain, Austria, the Netherlands, Greece, France and other countries.

Growing up in Chattanooga and Cleveland, Tennessee, her schools did not offer organized sports for girls.

“I was a pre-Title IX girl,” said Scruggs.

Title IX is a 1972 amendment to federal civil rights laws that states no person in the United States shall, on the basis of sex, be excluded from participation in any education program or activity receiving federal financial assistance.

Unlike her older brother, Joe Scruggs, who started sports when he was in elementary school, Scruggs didn’t shine on the basketball court until she attended the University of Tennessee.

Her basketball coach, Margaret Hudson, who would later work with Scruggs at Emory & Henry College, played a large role in directing her path to a sports career.

“Sometimes the smallest remarks can make a big different in someone’s life,” said Scruggs, who recalled telling Hudson that she was probably too petite in size to try out for the college basketball team.

“Margaret Hudson said to me, ‘You know, sometimes the smallest ones are the best ones.’

“I did try out and played four years at UT and later became a college basketball coach, all as a result from that small — probably insignificant to her — comment she made. It changed the direction of my life, even though I didn’t know it at the time.”

“I can tell you where I was standing on the basketball court one day in practice early in my career at Emory & Henry when I had an overwhelming sense that this is where I was supposed to be,” said Scruggs.

“How could I have been so blessed?” she asked.

“When I came to Emory & Henry, just think of the people who were here in the athletic department — Eleanor Hutton, Margaret Hudson, Bob Johnson, Fred Self, Dave Thomas and Lou Wacker. All of them in their own way is exactly what you aspire to be,” she said.

“It’s those relationships with colleagues — and my students — that make this place so special.

“For me as a coach, my relationships with the players were never as important to me as the relationships they built with each other.

“The real sacrifice — if your team is going to be successful — is putting other people above yourself.

“Jesus’ example was servant leadership. That’s what I wanted to have with our teams —helping and encouraging other people.”

As a colleague, friend and former student, Beverly Sheddan said Scruggs exemplifies what it means to be a servant leader.

“Her passion and enthusiasm for teaching and coaching has been such a positive influence in my life, and the lives of so many others. She takes a genuine interest in people, and that interest is backed up with action,” said Sheddan.

“Her passion for teaching and her love for Emory & Henry are evident from the moment you meet her,” said Anne Crutchfield, director of athletics at the college.

Retirement probably won’t keep Scruggs off the court if she has anything to say about it.

She’s already planning how she will spend her days once she retires at the end of this semester in May.

“I don’t know how this opportunity will carry into the future, but it would be great to continue working with the Special Olympians and the E&H student volunteers,” she said.

She also would like to continue to broadcast the women’s basketball games on WEHC-FM 90.7.

“Anyone who has graduated from Emory & Henry will tell you that the college is part of their lives forever — just maybe not as daily as it once was,” said Scruggs.

“That’s how I see my future. Emory & Henry will always be very much a part of my life and who I am.”