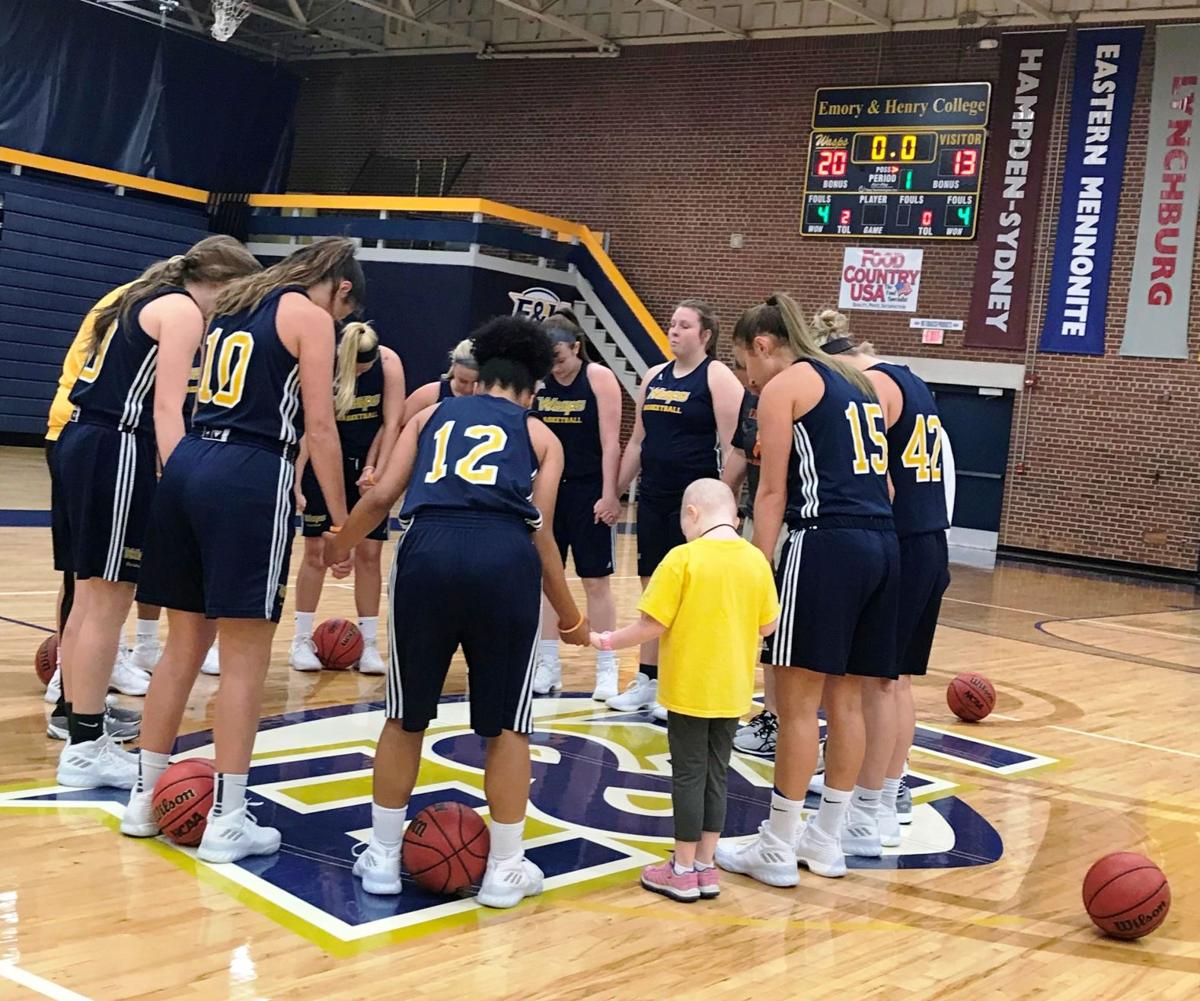 Ellee Large, who is battling leukemia, joins members of the Emory & Henry basketball team as they conclude a recent visit with prayer. 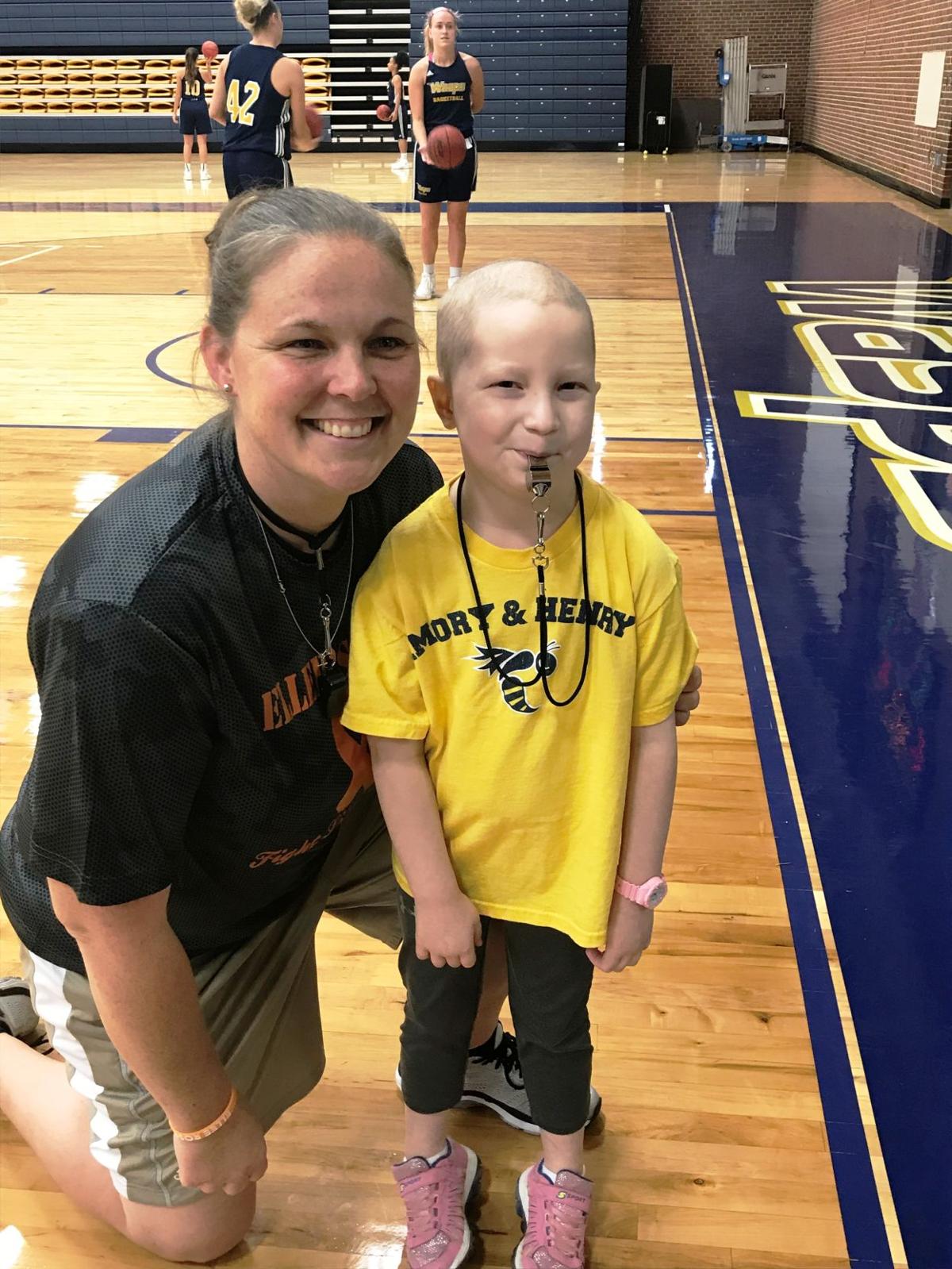 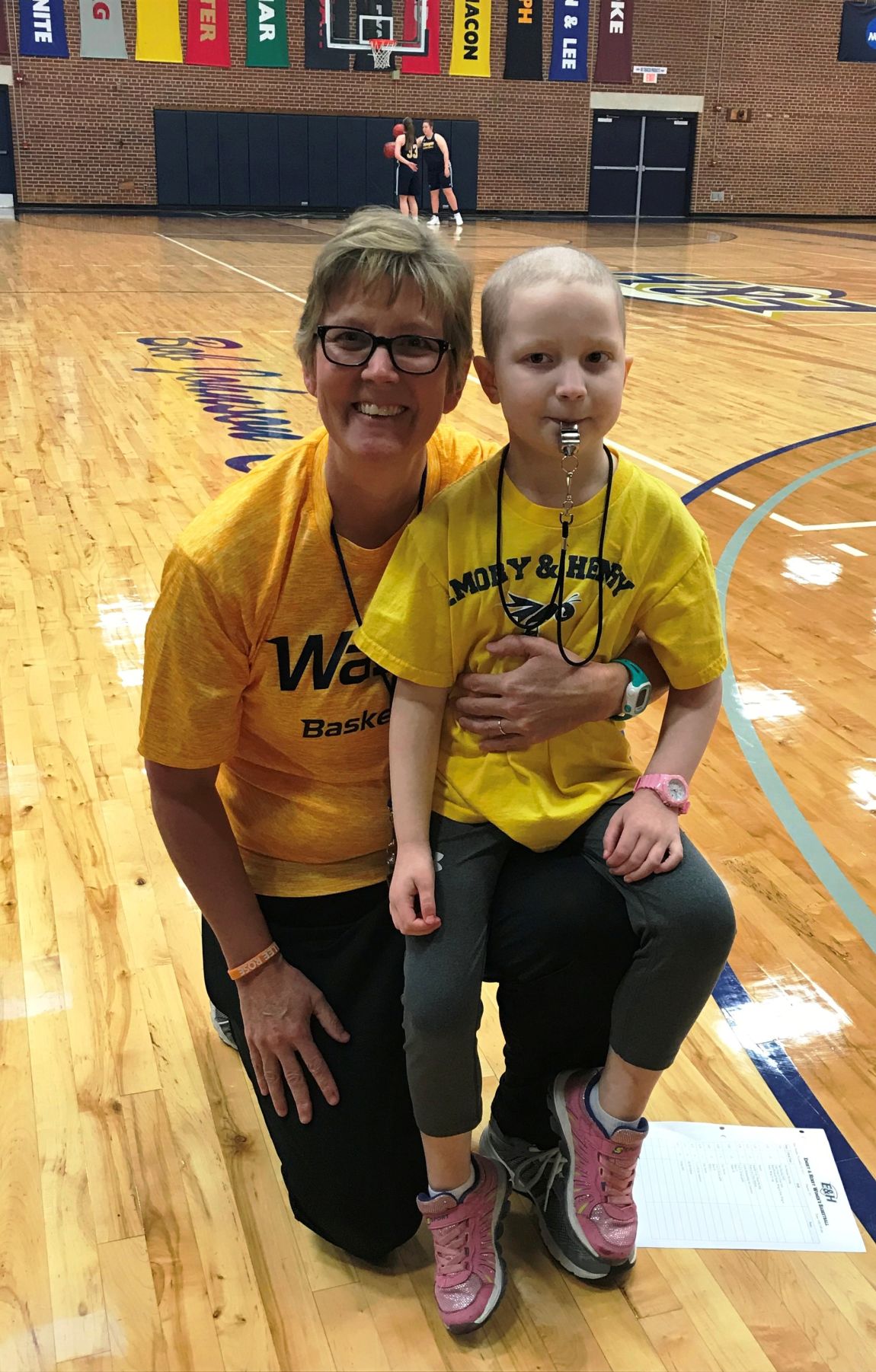 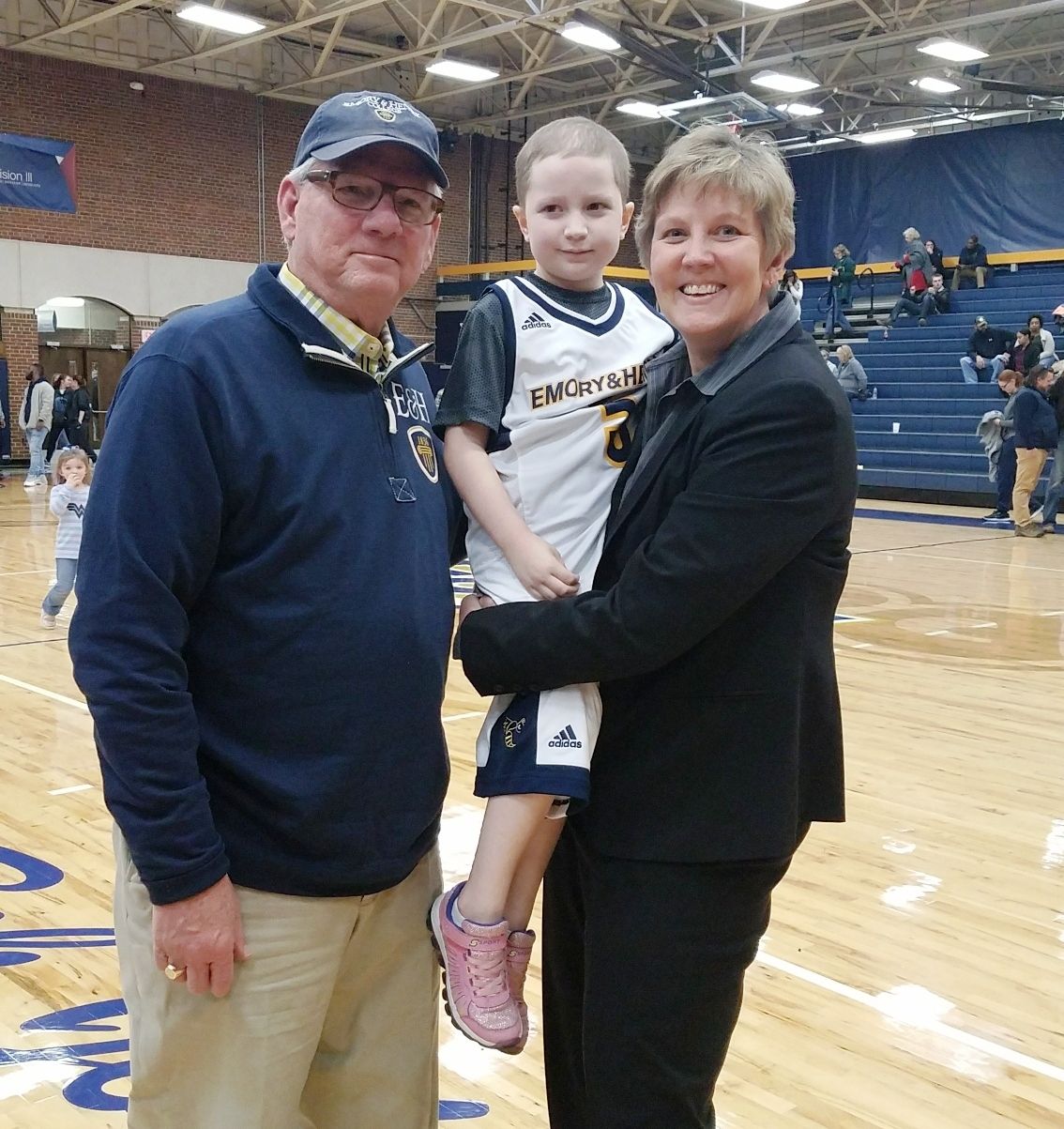 Emory & Henry College President Jake Schrum poses with Coach Anne Crutchfield and 6-year-old Ellee Large during her recent visit to campus. The women's basketball team 'adopted' Ellee as one of their own in October. 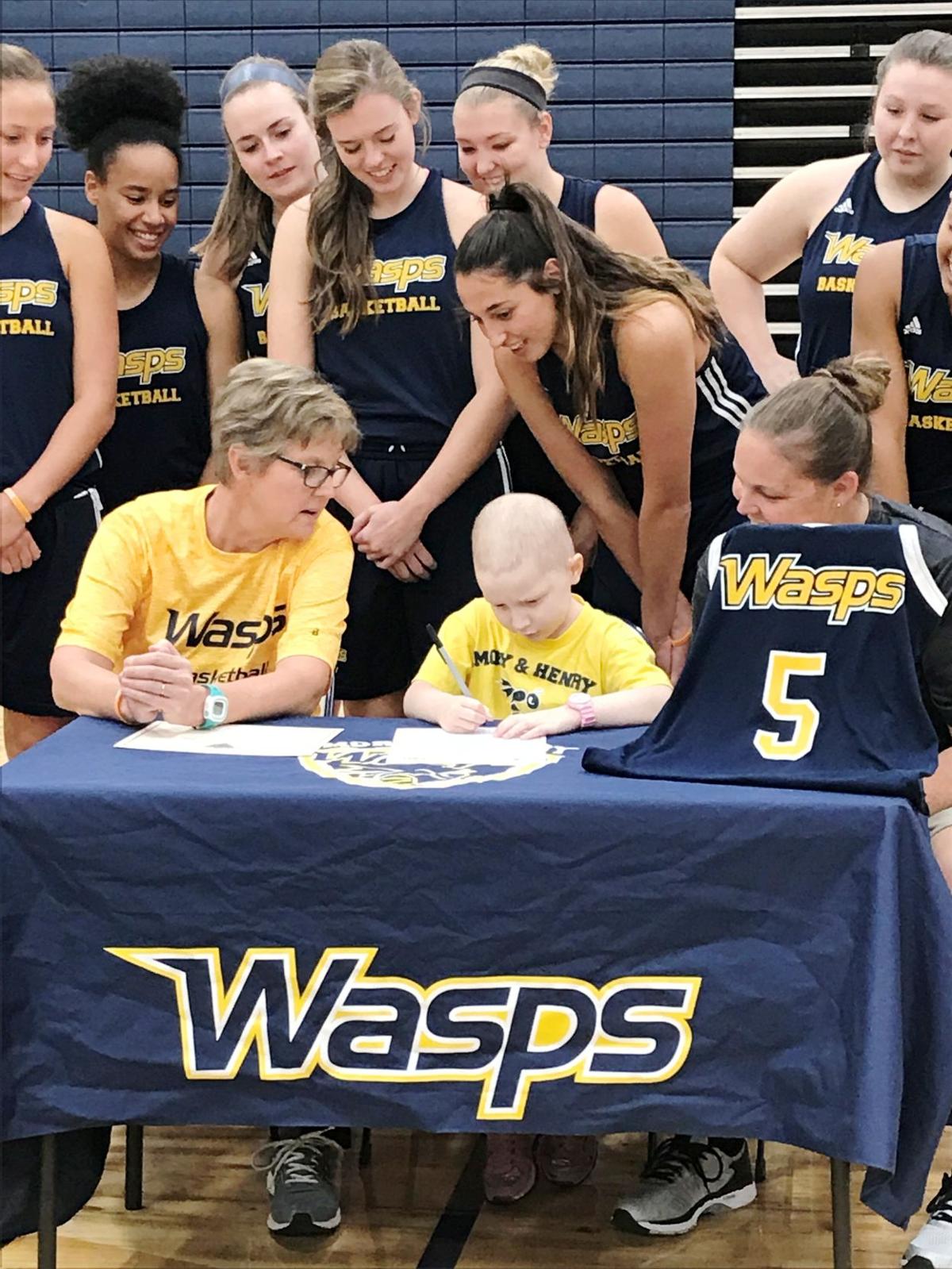 As Emory & Henry basketball coaches Anne Crutchfield (left) and Jaclyn Dickens (right) sit beside 6-year-old Ellee Large (center), members of the women’s basketball team huddle together to watch their new friend sign a letter that makes her an official member of the team.

Ellee Large, who is battling leukemia, joins members of the Emory & Henry basketball team as they conclude a recent visit with prayer.

Emory & Henry College President Jake Schrum poses with Coach Anne Crutchfield and 6-year-old Ellee Large during her recent visit to campus. The women's basketball team 'adopted' Ellee as one of their own in October.

As Emory & Henry basketball coaches Anne Crutchfield (left) and Jaclyn Dickens (right) sit beside 6-year-old Ellee Large (center), members of the women’s basketball team huddle together to watch their new friend sign a letter that makes her an official member of the team.

EMORY, Va. — A 6-year-old girl battling cancer has an army of supporters behind her, including the Emory & Henry Women’s Basketball team.

In recognition of Play4Kay, an annual fundraising initiative of the Kay Yow Cancer Fund, the basketball team has designed a T-shirt that honors Ellee Large, an Abingdon youth, and raises money to benefit St. Jude Children’s Research Hospital, where Ellee has been receiving treatments for a high-risk leukemia since January 2017.

Supporters are encouraged to wear the white T-shirts bearing the words “Ellee’s Army” when the basketball team plays Lynchburg University at 2 p.m. on Feb. 17 in the King Center on campus.

“It will be a feeling of awe that day, just knowing she has an even larger army behind her,” said E&H forward player Taylor Blevins of Abingdon, who, along with her teammates, will wear the benefit shirt on the basketball court.

“This also raises awareness for her condition and others going through the same situation.”

Ellee may be only 6 years of age, but her courageous battle with cancer is an inspiration to her family and friends, especially the members of the women’s basketball team who adopted her as one of their own last fall.

The team’s decision to befriend the pediatric patient began when some of the local team members learned about Ellee’s struggles with cancer. The female athletes began mailing cards and letters of encouragement to her, especially when Ellee was hospitalized last summer.

Their efforts went a step further when the team members suggested they make Ellee their newest member of the team.

Assistant coach Jaclyn Dickens invited Ellee, along with her parents, grandparents and other family members to the college to make the new assignment official. While her new college friends watched, Ellee signed a celebratory letter from the team, accepted the number 5 as her team identification and was even assigned a uniform and locker to use when she attends the games.

Elle was also presented with a certificate naming her an honorary team member during the meeting.

“We had a great day when she visited campus,” said Anne Crutchfield, who coaches the Emory & Henry team. “We just fell in love with her. She stayed for practice, and we ate cupcakes afterwards. She’s a precious little girl, and her family is awesome.

“We found out other colleges, such as University of North Carolina at Wilmington, had adopted young cancer patients, and we were excited to do the same,” Crutchfield said.

Shauna and Kevin Large said they are thankful for the love and support shown for their young daughter. Because of her illness, Ellee has been unable to attend Cornerstone Christian Academy in Abingdon this year, where she is a first-grade student.

“Ellee misses her friends at school, but these basketball girls have become her new friends. They’ve become like family to us,” said Shauna Large. “Coaches at the college get in touch with us quite often to see how Ellee is doing. ... They are throwing a Valentine’s Day party for her since she will miss her party at school.”

Ellee has become an important part of the basketball family, too.

“We want to include her in all that we do. We love having her around. She sits on the bench with us during practice and games. She’s really just a part of us,” said Crutchfield. “We’re so blessed to have her on our team.”

Because of a widespread flu outbreak this winter, Ellee has not attended games as often as she likes.

Blevins, who plays forward on the team, said, “The whole team was thrilled and beyond excited to have the opportunity to be involved with her life. Little did we know she would end up melting our hearts and doing more for us then we could ever imagine.

“She loves the game Bean Boozled,” added Blevins. “It’s a pack of jelly beans that includes unexpected flavors. One may look like buttered popcorn, but actually it tastes like a rotten egg. It’s one of her favorite activities to play before our games begin. We all get a good laugh watching the reactions of everybody eating their jelly beans.”

At Christmas, team members took her to the movies and visited her in her home. “We try to make things as normal as we can for her,” said the coach.

The 15-member basketball team, who have dubbed themselves “Elle’s Army,” had no idea the impact the girl would have on their own lives.

“It started with us wanting to serve her, but in reality she has served us while teaching us so many lessons,” said Blevins.

“Elle has become my hero. She has an unbelievable optimistic attitude towards life. She has made me realize my problems are very small compared to hers.

Another team member, Chloe Harris, a junior from Bristol, Virginia, agreed their new friendship with Ellee has helped put her own life into perspective.

“Elle shows our team that we don’t have challenges that we have to overcome daily, we just have inconveniences. As a college student, we can get stressed and forget to rejoice in our circumstances, but Ellee proves to us that the things we deal with are not mountains but grains of sand in comparison to her battle. It shows me the importance of being there for others, because maybe one day, you’ll need someone to be there for you,” said Harris.

Peyton Williams, a Saltville native who is guard for the team, said bonding with Ellee has changed her attitudes, as well. “With the small amount of time I have spent with her, she has taught me to enjoy the small things in life.”

Williams enjoys reflecting on a song she heard Ellee sing.

“She sang along to the words ‘there ain’t nothing gonna steal my joy.’ Just hearing her touched my heart and brought tears to my eyes. I hope that one day I will have the strength that Ellee exhibits at the age of 6. She has been such a blessing to the team, and I will forever be grateful for this relationship.”

Team member Kara Stafford of Blountville, Tennessee, summed up the team’s feelings: “Ellee’s love for her family, friends and God is an inspiration to us. She brings so much light and joy into our lives.”

T-shirts that honor Ellee can be purchased at the Feb. 17 game or by writing to Taylor Jefferson at Emory & Henry College at tjefferson@ehc.edu. Cost is $10 per shirt.