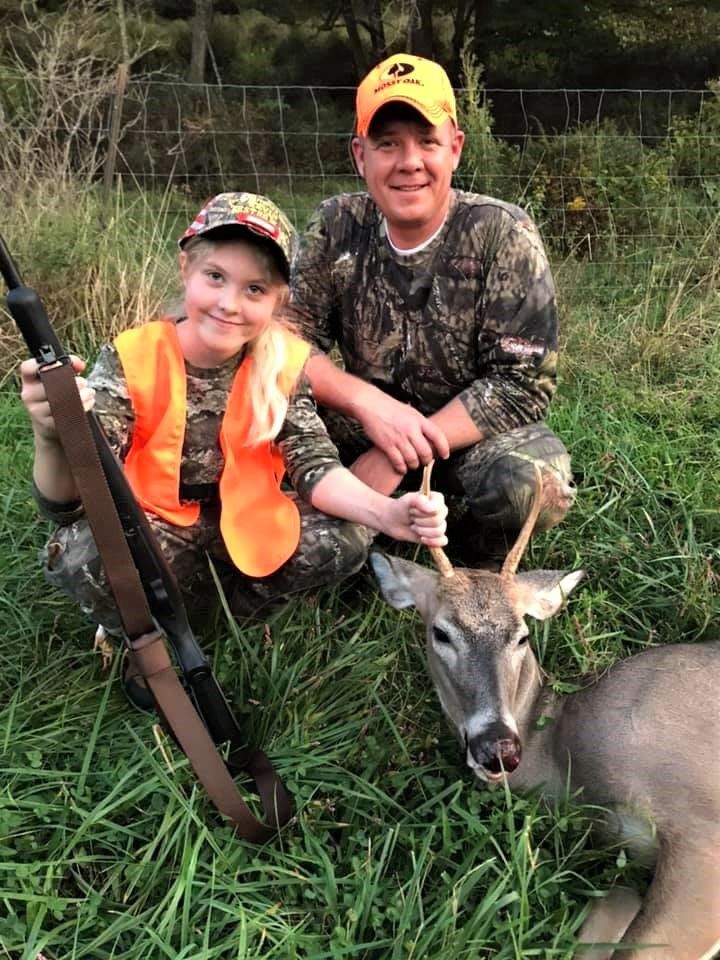 Lily Clair, 10, holds up a young buck that she was able to shoot from 200 yards away. Her father, John Clair, (right) has taken her hunting for several years and says he has seen Lily grow more mature and responsible each year. 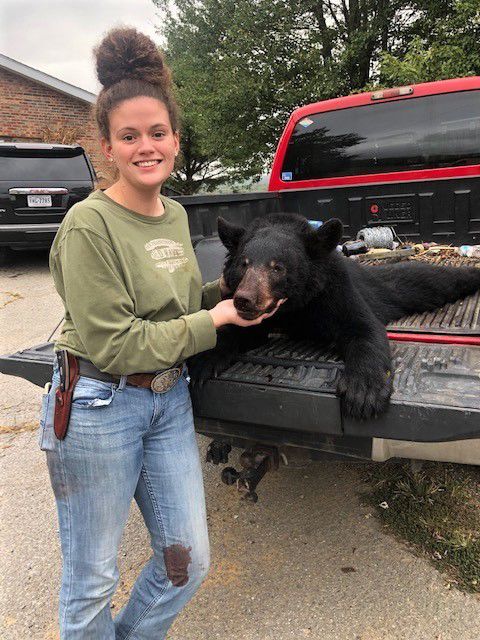 Madelyn Fore, 15, shot a 193-pound bear during a Youth & Apprentice Bear Hunting Day earlier in October, an event to give youth and first-timers an opportunity to learn to hunt with parents and other mentors.

Lily Clair, 10, holds up a young buck that she was able to shoot from 200 yards away. Her father, John Clair, (right) has taken her hunting for several years and says he has seen Lily grow more mature and responsible each year.

Madelyn Fore, 15, shot a 193-pound bear during a Youth & Apprentice Bear Hunting Day earlier in October, an event to give youth and first-timers an opportunity to learn to hunt with parents and other mentors.

GLADE SPRING, Va. — Hunting season is underway, and this year, there may be more women taking a shot at the outdoor recreation than expected.

According to NRA Family, more women are choosing to hunt as a way to put meat on the table. In 2001, there were 1.8 million registered female hunters in the country, but by 2013, that number nearly doubled to 3.3 million.

But it’s not just women who are toting rifles into the woods. Many children say they enjoy the sport, as well as being surrounded by nature and spending time with a hunting parent.

The Virginia Department of Game and Inland Fisheries (DGIF) created Youth & Apprentice Days as opportunities for youth to learn about the sport by accompanying a licensed hunter. A $10 license for youth is good for two years and can be purchased at Walmart and other licensing agents in Virginia.

“It’s an excellent opportunity for youth and first-time hunters to have a fairly high success rate during the Youth & Apprentice Days,” said Lee Walker, outreach director for DGIF in Richmond.

“An interest in hunting and being outdoors is generally passed down from family to family,” said Walker. “Unfortunately, many kids these days spend more time in front of a computer or mobile device instead of outdoors. We’ve had a lot of good response from the weekends of hunting.”

Two local youth have bragging rights when it comes to bagging big game this season.

Fifteen-year-old Madelyn Fore had no idea what awaited her on a hunting trip when she left the house early Saturday morning nearly two weeks ago.

The teen didn’t come home with a deer or turkey that day. She pulled up to her Glade Spring home with a black bear in the back of her father’s Ford 350.

She went bear hunting last year, too, but didn’t get one.

This year’s harvest is especially important for the teen because it’s the last year she qualifies to participate in the Youth & Apprentice Bear Hunting Day — an opportunity to hunt before the official season begins. She’s hunted with her father, Jesse Fore, since she was a little girl and has killed two bucks, a turkey and a coyote.

Accompanying several friends and their children, Madelyn said her bear hunting adventure this year is one she will remember.

Madelyn and her father were hunting together in Smyth County when they received word from hunters in their party that dogs had treed a bear on Clinch Mountain, more than 2 miles from their location.

“It was very exciting,” said Madelyn, who still has sores on her feet from walking the distance in cowgirl boots.

Once she arrived, she was given first dibs on shooting the bear 40 feet up in a tree.

After arriving at a check station, the teen learned the male bear she harvested weighed 193 pounds. She also was required by law to submit a premolar tooth from the bear, which will be used to determine the bear’s age. This helps DGIF better monitor and manage bear populations.

The bear was skinned and the meat processed on the farm following their trip.

The next day, Madelyn returned to the hunting field closer to home and shot a turkey with her favorite Ruger .243 rifle.

“I just feel thankful — and proud — to have these hunting opportunities,” said Madelyn. “I’m sure I’ll enjoy hunting for many years.”

A taxidermist is mounting the head of the bear in a rug that she plans to display in her room.

Ten-year-old Lily Clair is on her way to rivaling some of the best hunters in her neck of the woods.

Hunting from a ground blind with her father, John Clair, the young hunter said she spotted the buck coming down the mountain before taking aim. She later captured a spike — a young buck — at only a 213-yard vantage point.

“These are the first deer of mine that will get mounted,” said Lily, who has harvested a total of four deer since she began hunting with her father at age 7.

“It’s fun to get up early and hang out with my dad. I like being out in nature. It makes me happy.”

The father said he’s seen his daughter become more mature and responsible with each year of hunting.

“Lily is 10 years old and shot the deer at 200 yards. That’s amazing but not nearly as amazing as how hunting has helped her mature. Her resistance to suffering has increased. She can sit in the ice cold for hours waiting to take aim. She’s crawled up a field in the snow.

“Hunting also creates intimate relational family time. We were both so excited, we were crying when she shot the deer this year,” said the father.

“The time we spent together is important because she owns that accomplishment. She put in all the effort, and she connected with her goal. She has this moment of ownership that truly belongs to her.”

After the deer head is professionally mounted, Lily plans to hang her trophy in her room to help her keep the memory of her accomplishment alive.

Keep deer away from homes with these deterrents

To address frequent deer sightings in Abingdon, Virginia, the town has released documents encouraging homeowners to avoid planting anything that deer like to eat and to try deterrents that can help keep deer in their natural habitats.