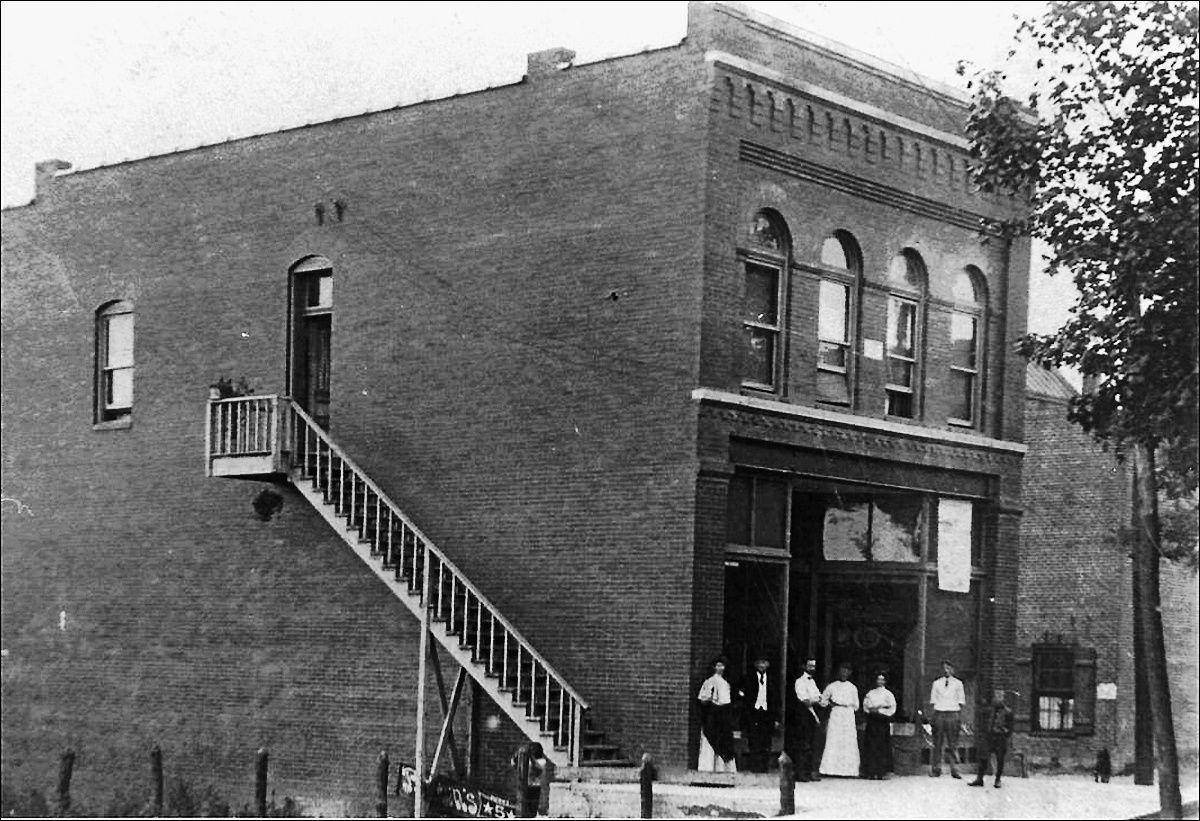 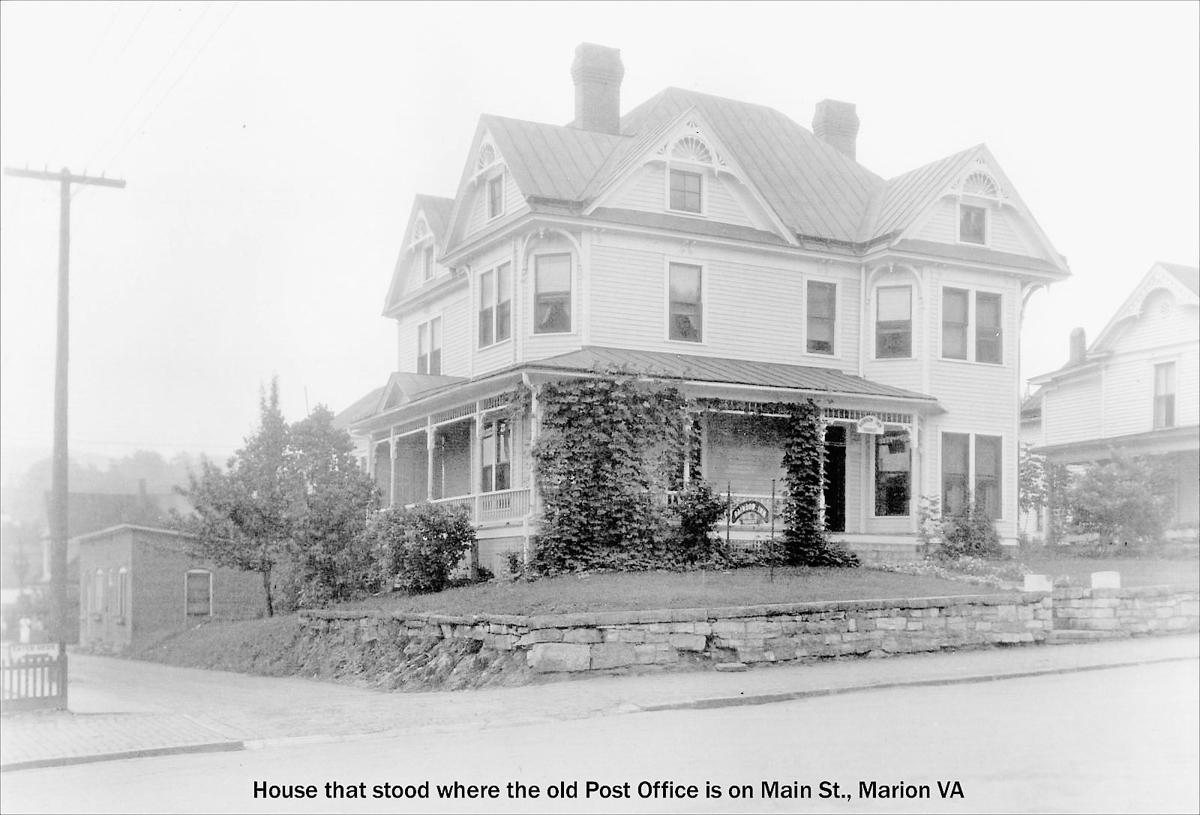 The P.W. Atkins residence, which stood at the location of the old post office. 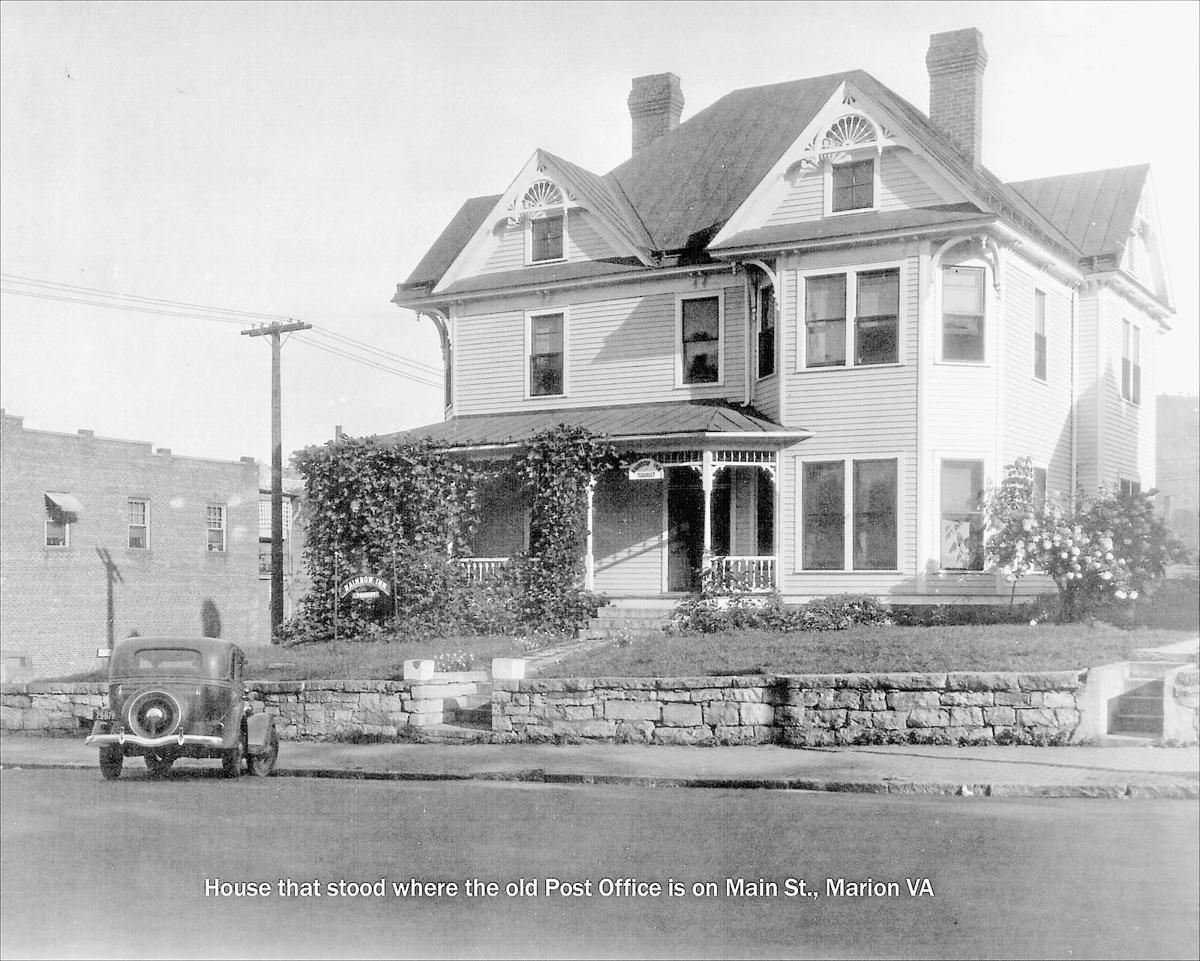 Another view of the P.W. Atkins residence, which stood at the location of the old post office. 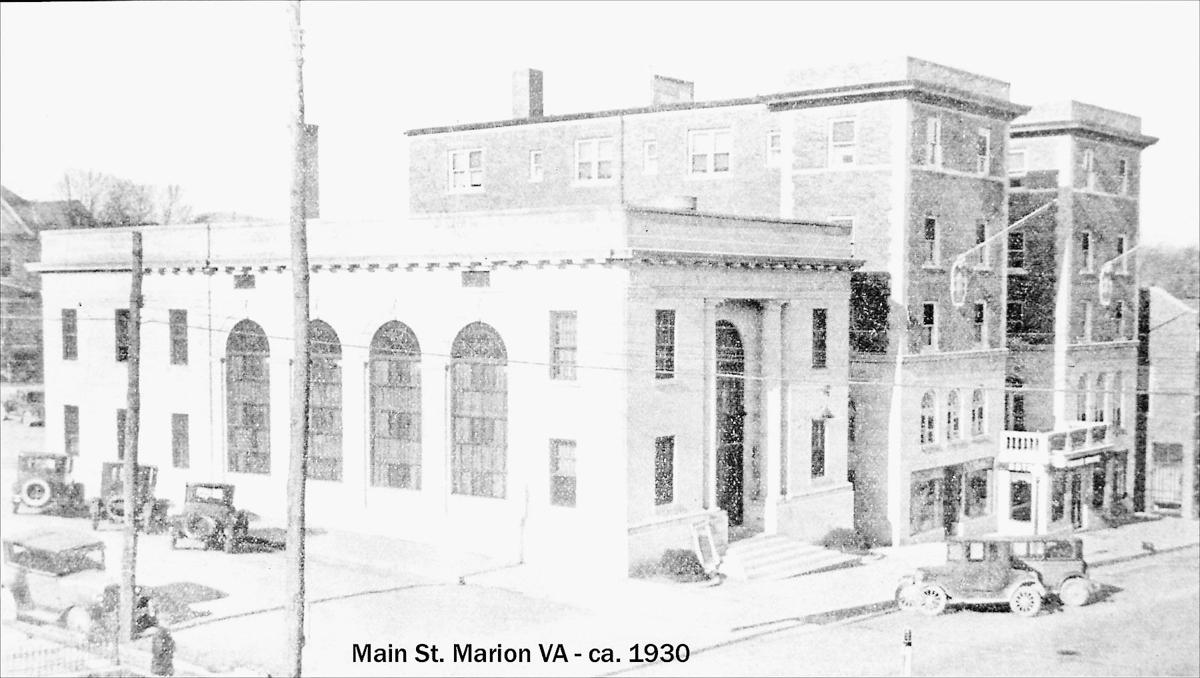 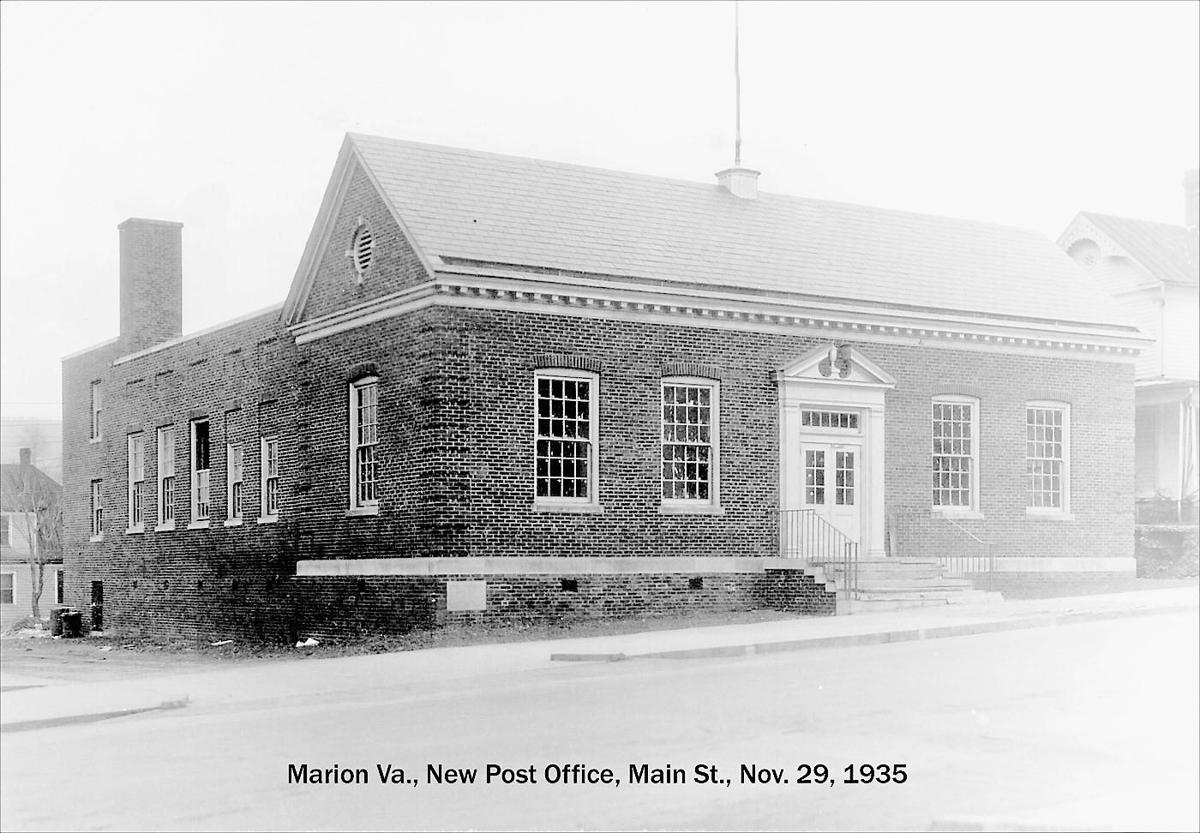 The former post office, shortly after construction was completed.

The P.W. Atkins residence, which stood at the location of the old post office.

Another view of the P.W. Atkins residence, which stood at the location of the old post office.

The former post office, shortly after construction was completed.

I often drive down Main Street in Marion and wish that I could be transported back in time to see what things were like many years ago when horse-drawn wagons were the mode of transportation and gas lamps lit the streets. Although it is impossible to enter a time machine and physically go back to the days before concrete sidewalks, electricity and cars, there are a few tools that allow us to get a glimpse of what Marion’s streetscape was like. Some buildings have drastically changed since the 1930s, while others have remained the same.

There are several resources that allow us to envision downtown Marion and offer a detailed history of the buildings that have had a front-row seat to the daily lives of the citizens of Marion. The first and most obvious resource is the photographic history that has been left behind by photographers—amateurs and professionals. The old adage is true that a picture is worth a thousand words. Countless photographs exist, showing the old store fronts, homes, theaters and churches of downtown Marion.

Other resources include court records, such as deed books and property tax lists, which tell the stories of ownership and offer maps of downtown Marion. In addition to court records, there are oral histories, newspaper articles, town minute books, map collections and local history books, which can provide details that may otherwise be overlooked.

In researching the history of three downtown businesses, I referred to two wonderful resources—“Marion Landmarks” by Ronnie Harrington and “Heritage of Smyth County Virginia: 1832-1997.”

The first landmark I decided to research was the old post office, which is now occupied by Macado’s restaurant. I became interested in this site several years ago, when Kenny Sturgill shared his photograph collection with me. There were several pictures of an old home that sat on the corner of East Main and Chestnut streets. The home was demolished in 1935 to make room for the post office.

According to Ronnie Harrington’s book, the home was “one of Marion’s most beautiful Victorian homes. It was built by Dr. P.W. and Annie B. Atkins on a lot they bought from S.F. Browning & Co. in 1900. Contractors for the house were local builders, J.W. Rice and H.C. Pruner. It was used as the Rainbow Inn, a tourist lodge, in the early 1930s. It was purchased by C.C. Lincoln and John D. Lincoln in 1926. They conveyed it to the U.S. government in 1935.

The post office was “completed in early 1936 and operated at this location for 60 years. After the building was vacated in 1996, it was offered for sale by the U.S. Postal Service. Gilda and Edward Dingler became the purchasers in 1998 and converted it into the Post Office Antique Mall. After several years of doing business at this location, the Dinglers sold the building to Richard H. Macher in 2003.”

The next landmark I wanted to research was the old Happy’s restaurant building. I have always been fascinated by this old structure and wondered about its beginnings. I was able to locate a brief history in “Marion Landmarks.”

“Designed by H. Doriot, architect of Bristol, J.W.S. Rhea built this brick store building in honor of his father, J.B. Rhea, in 1905-06. It replaced an earlier wooden structure that had stood on the same site. The building housed the F.F. Francis storehouse on the first floor with apartments upstairs. Margaret Rhea Staley acquired the building in 1920 and it was used by the 3C Nectar Bottling Co. In 1924, the property was sold to Wilson W. Scott and Philip R. Francis. After the death of Josephine F. Francis, the company retained ownership in the building until 1990 when it was conveyed to the Town of Marion. In 1974, the first floor of the building was renovated as a pizza parlor. Happy’s Pizza later became Happy’s Restaurant.” The building has since been the site of several other businesses.

The final landmark I researched is one that stands out as being a centerpiece of downtown Marion—the Hotel Lincoln. Prior to the construction of the hotel in 1926-27, “the lot was occupied by a large two-story frame house first owned by George W. Richardson in 1887. Judge Richardson sold the house in 1891 to A.F. Stone who owned a neighboring brick store building to the west. C.M. Wolfe, a grocer, bought the house in 1894 and added a frame store building to the side of it. The property was then conveyed to a long list of owners. By 1914, the owner was Dr. W.M. Sclater, who used his part of the lot to build a one-story brick building to house the D.M. Smith Drug Co. The drug store was located where the Lincoln Hotel Coffee Shoppe was later built. The Marion Hotel Corporation, owned by C.C. Lincoln and Dr. Sclater, bought the house, jewelry shop, and drug store properties in 1926 and demolished the buildings to make room for the hotel.”

“Hotel Lincoln, a Virginia Historic Landmark, was built by Charles C. Lincoln Sr., and Dr. William M. Sclater in 1927. Originally, this five-story brick hotel was named for Francis Marion, but the name was changed when the closed Hotel Marion across the street was renovated and reopened in 1928. The similarity of the names caused business conflicts, so the owners of the Francis Marion changed the name to Hotel Lincoln.

“From 1927 to the mid-1960’s, Hotel Lincoln was Marion’s most important social destination. The walnut-paneled ballroom on the mezzanine floor was the scene of business meetings, banquets, public forums, wedding receptions and dances. This room, along with others that adjoined it, provided meeting space for the Rotary, Kiwanis, Lions, Pilot and Bridge clubs and many other organizations in Smyth County.”

“Although the Lincoln was built to meet the needs of a small, but growing town, it nevertheless had the quality of a much larger ‘city hotel.’ Guests were greeted by a doorman at the front entrance. An elevator operator transported guests to the upper floors. Maids cleaned the rooms daily. Meals could be ordered through room service from the hotel kitchen. Each of the 57 guest rooms had such modern conveniences as a telephone, reading lamp beside each bed, writing desk, and access to a private bathroom.’”

“In 1947, the Lincoln family sold the hotel and all its furnishings to Ralph Bevier of Fairmont, West Virginia, and Homer K. Bowen of Wytheville. Mr. Bowen and his family eventually became the principle stockholders of the corporation and moved into the hotel. It wasn’t long after the change of ownership that the Lincoln moved into a new era, as did all hotels across the nation. The advent of the modern motel with its convenient parking and economy rates became a focal point for tourists, leaving traditional hotels with fewer guests.

“Ralph and Mildred Powell sold the property in 1997 to Jim and Patsy Franey who operated a restaurant in the building for a few years. The hotel closed on October 18, 1999. The building was sold in 2000 to Joseph F. and Susie Ellis. Renovation began on the structure in 2003. The hotel now operates as the General Francis Marion.”

These are just a few historical snapshots of landmarks in downtown Marion. If you have photographs or stories about other landmarks that you would like to share, I may be contacted at mwlinford@yahoo.com.