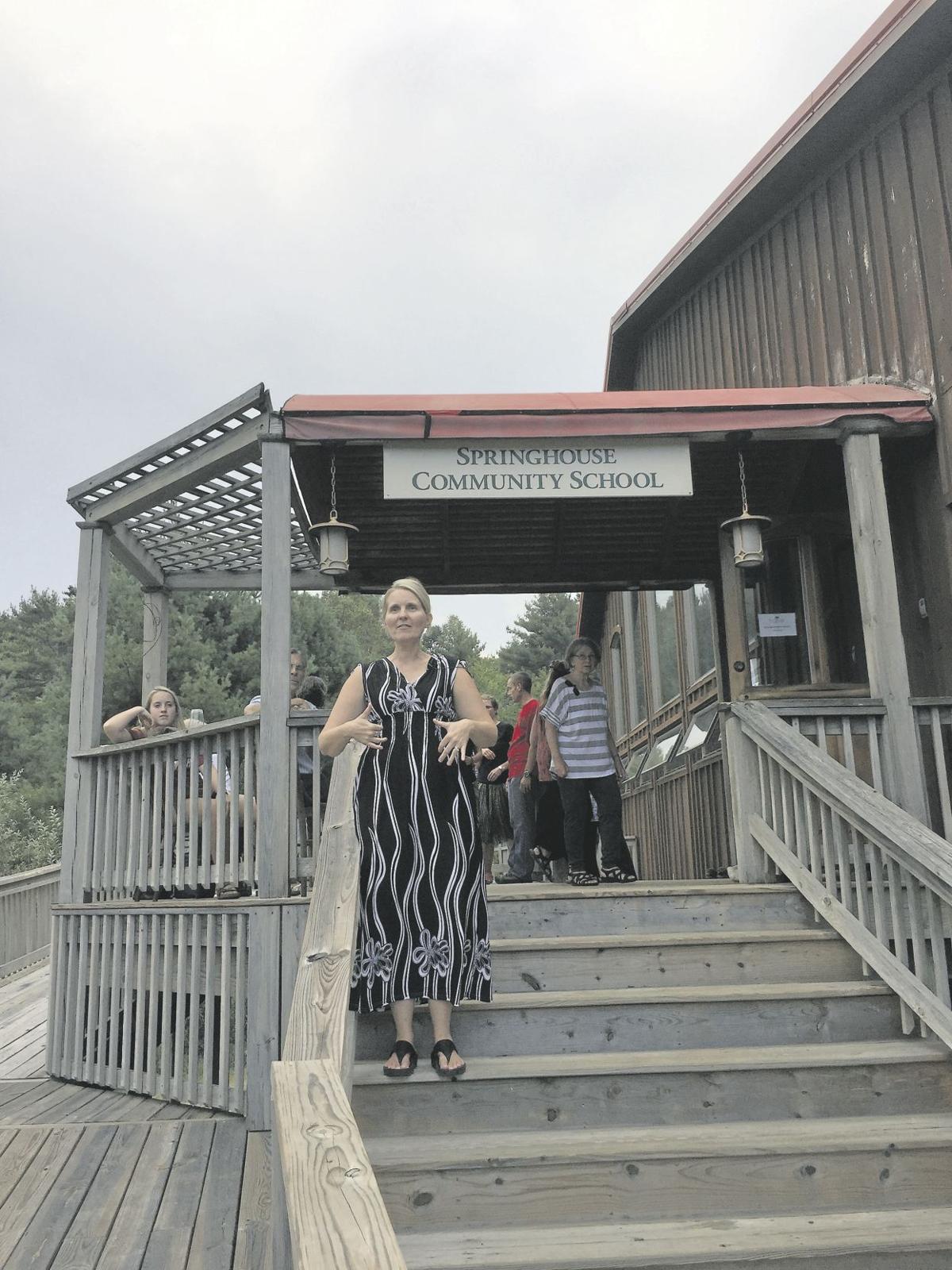 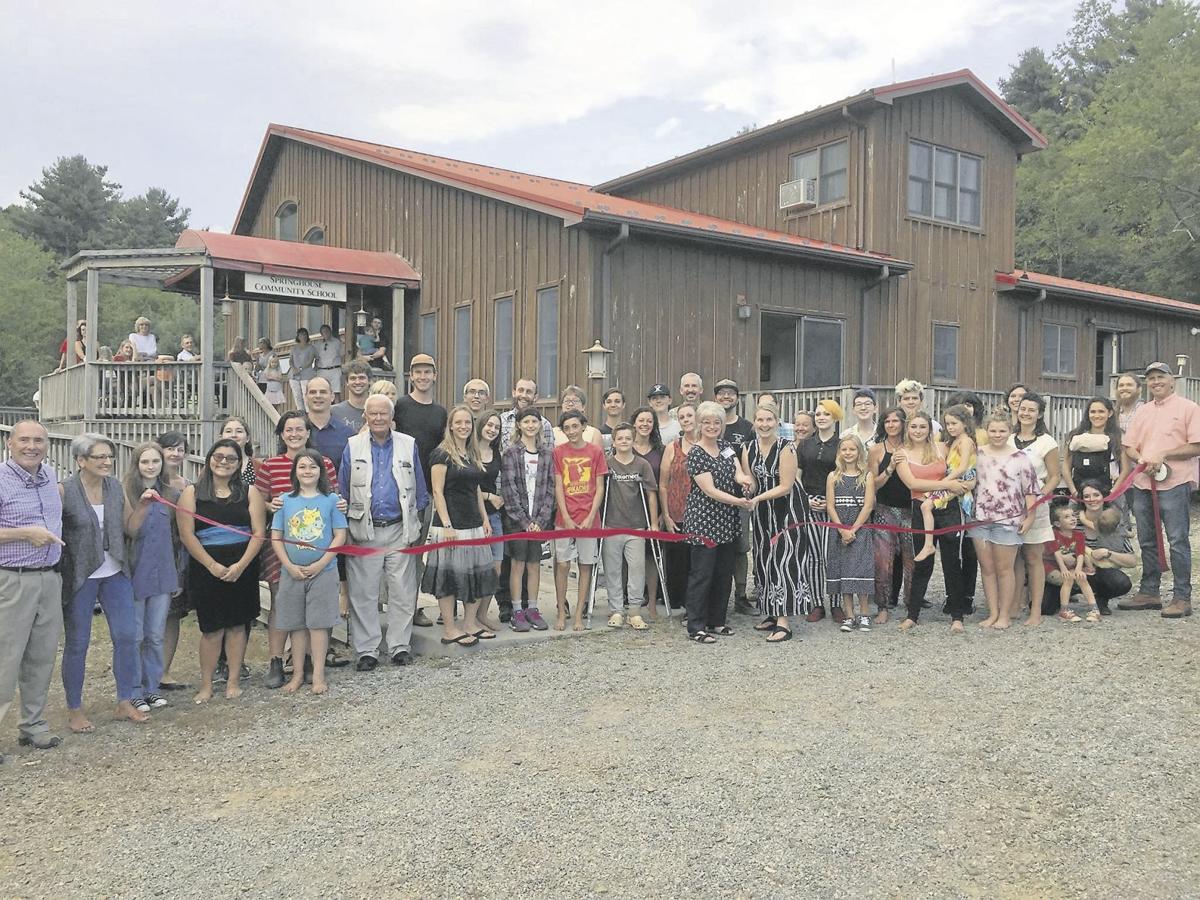 As the sun was just beginning to set on the evening of Sept. 10, Jenny Finn addressed a huge crowd in front of the former Blue Ridge Center for Chinese Medicine in Pilot. With the help of an anonymous donor, the space was recently acquired as the new home for Floyd’s Springhouse Community School. People from all walks of life and with various relationships to the school had come out for a housewarming, concert and potluck.

“It’s really special that we’re here,” said Finn, who is a co-founder of Springhouse and the current Head of School. “This is a blessing.” Finn explained to the crowd that the mission of the private school is to “reimagine the purpose and practice of education,” always guided by six foundational values—connection, individuality, creativity, resiliency, integrity and trust.

“Why are we doing this?” Finn asked those in the crowd. “Community,” one person answered back. “Because the world needs it!” another shouted. The community that Springhouse has built to serve its local universe in Floyd seems to be tight-knit and flourishing—and the group’s interconnection was a theme reiterated throughout the night.

Weaving through the groups of people chatting and enjoying a meal, no one asked, “What are you doing here?” or “Who are you?” The question repeatedly posed was, “How are you connected to Springhouse?” Marketing, Outreach and Development Coordinator Carolyn Reilly said the purpose of the open house was to “bless” the new building and “give it life”—it’s a home for which the Springhouse School has long searched. “We’ve been searching for a more permanent home,” Reilly said. With 22 full-time students and a homeschool program on Fridays, the school population had outgrown its former spaces. In summer 2018, a benefactor who believed in the mission of the school offered to gift either property or a building to the school. In August of this year, the students moved in to their new home.

Members of the team at Springhouse describe its mission in lofty, idealistic terms. “We always have room to grow in our soul, in our spirit,” Reilly said, which is why Springhouse tries to embody the principle of lifelong learning. Chris Wolf, the director of learner experience, explained how classes tend to function at Springhouse. “Courses are multi-disciplinary,” he said, “and we look at phenomena to study disciplines.” This often manifests in hands-on experiences like studying biomimickry in the woods to understand social challenges or building a sailboat to learn measurement and physics.

Skyler Locke—who just began his fourth year at the school and serves on the student Rites of Passage Committee—spoke positively of his experience with Springhouse’s philosophical emphasis on experiential learning. Recently, he said, the students walked 47 miles along the Blue Ridge Parkway from Floyd to Roanoke, and “the big thing (was) just the accomplishment.” He continued, “The big point overall of (the school’s Experience Week trips) is to learn, but also to really create the community. For me, that’s what the school has over other learning environments.”

Locke said he was inspired to get involved with the school’s “Rites of Passage” after being supported through a life transition of his own by the staff at Springhouse. “I trusted them—and I trust them a lot—because they’re kind of like a family to me,” he said. Locke, who described himself as “dramatic,” said the Springhouse School helped him realize that he could “use that drama to create these spaces of intense emotion”—the rites of passage ceremonies—rather than allowing his tendencies to have a negative impact on his community. In his view, “adolescence has a huge emotional impact,” and most schools don’t emphasize emotional intelligence or maturity in their curricula. The ceremonies, he said, let Springhouse students know what’s expected of them in a new phase of life, but also that they have adults they can trust outside of their parents.

“I feel insanely privileged,” Locke said, to be in the environment Springhouse fosters.

The Springhouse School began its 2019-2020 academic year on Sept. 3, and is still actively enrolling new students.