The “Sing Christmas!” cantata is under the direction of Bill Huber, Jim Regin and Joyce Blevins. 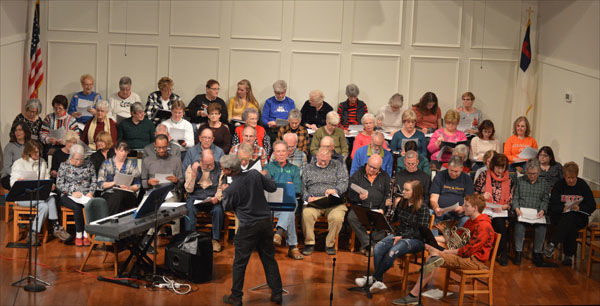 Members of the four choirs united their voices at Marion Baptist Church Wednesday evening to prepare for Sunday's cantata.

The “Sing Christmas!” cantata is under the direction of Bill Huber, Jim Regin and Joyce Blevins.

Members of the four choirs united their voices at Marion Baptist Church Wednesday evening to prepare for Sunday's cantata.

The new musical celebration of the Christmas story premiered at Carnegie Hall last month. This Sunday, a 50-voice choir will present the cantata in Marion.

That choral group has been created by the uniting of four local choirs, including those of three churches of different denominations. The choirs of First United Methodist Church, Marion Baptist Church and Ebenezer Lutheran Church will join with the Joyful Noise Community Choir to present “Sing Christmas!”

Jim Regin, director of First United Methodist Church’s choir and Joyful Noise Community Choir, said “'Sing Christmas!’ is a six-month project of two of my favorite choral composer/arrangers, Joel Raney and Mary McDonald.” Two of the most popular contemporary sacred music composers, Raney and McDonald, Regin said, “have taken many familiar Christmas carols and have even set familiar Christmas carols with different tunes to give the familiar story of Christmas a fresh twist…. ‘Sing Christmas!’ is a set of four suites, with each suite consisting of orchestral parts, familiar carols that everyone loves from all over the world, and a twist with a familiar carol text set to different music than we're used to. Narrators lead us through the Christmas story. Throughout the cantata, each carol is expertly treated with traditional and fresh harmonies!”

A 15-member instrumental ensemble that includes brass, strings, woodwinds, percussion and piano will accompany the choirs.

Fifteen musicians are coming from as far as Bedford and Johnson City, Tenn., Regin said, noting that the instrumentalists include professional musicians, a young cello “phenom” who competes all over the U.S.,  high school to university level music instructors, and students from the local high school, regional youth symphonies, and universities. “It's quite an eclectic and talented group of all ages,” he said.

With the costs of bringing in these musicians, Regin said a freewill offering will be taken to offset some of those expenses. However, there is no admission fee for the cantata. Audience members, Regin noted, will be invited to sing several carols with the instrumental ensembles.

Regin, who is working with Bill Huber, choir director of Ebenezer Lutheran, and Joyce Blevins of Marion Baptist Church to lead the cantata, described the experience of the churches coming together as poignant.

“There is such a powerful emotion that comes over you as you see folks from different denominations singing the Christmas story together as one,” Regin said. “We drop all of our theological and political differences and come together to make a statement that we are much more alike than we are different.  And, these days, we need this more than ever!”