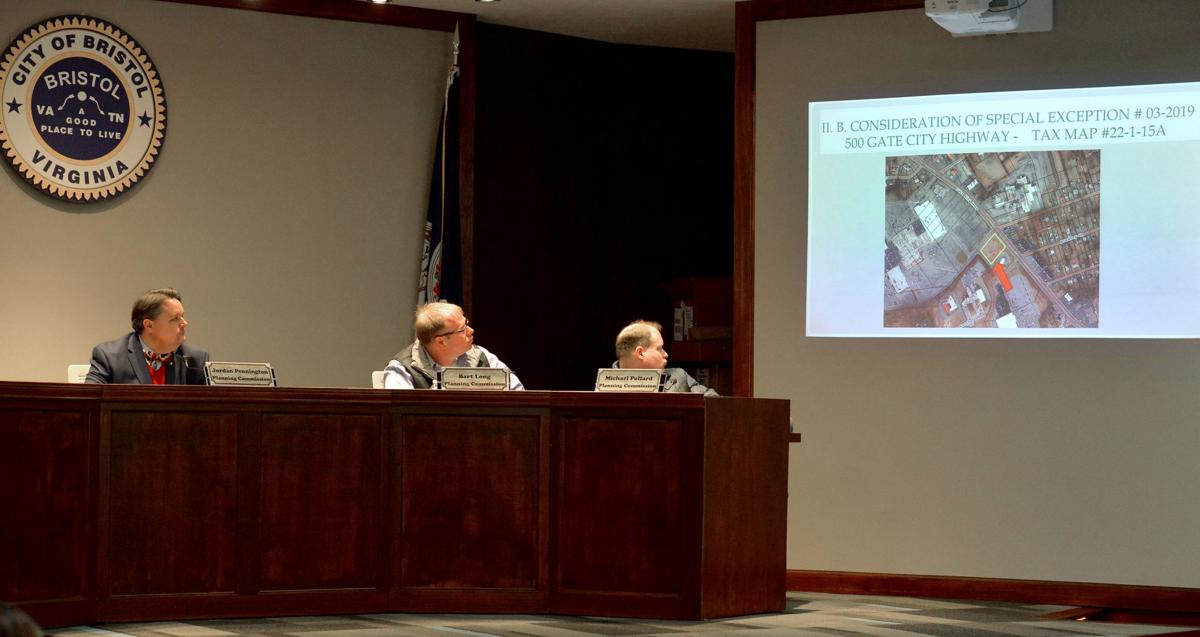 Members of the Bristol Virginia Planning Commission look at a presentation for a proposed special exception for Dharma Pharmaceuticals, which would allow it to move to an empty lot adjacent to the Bristol Mall entrance. 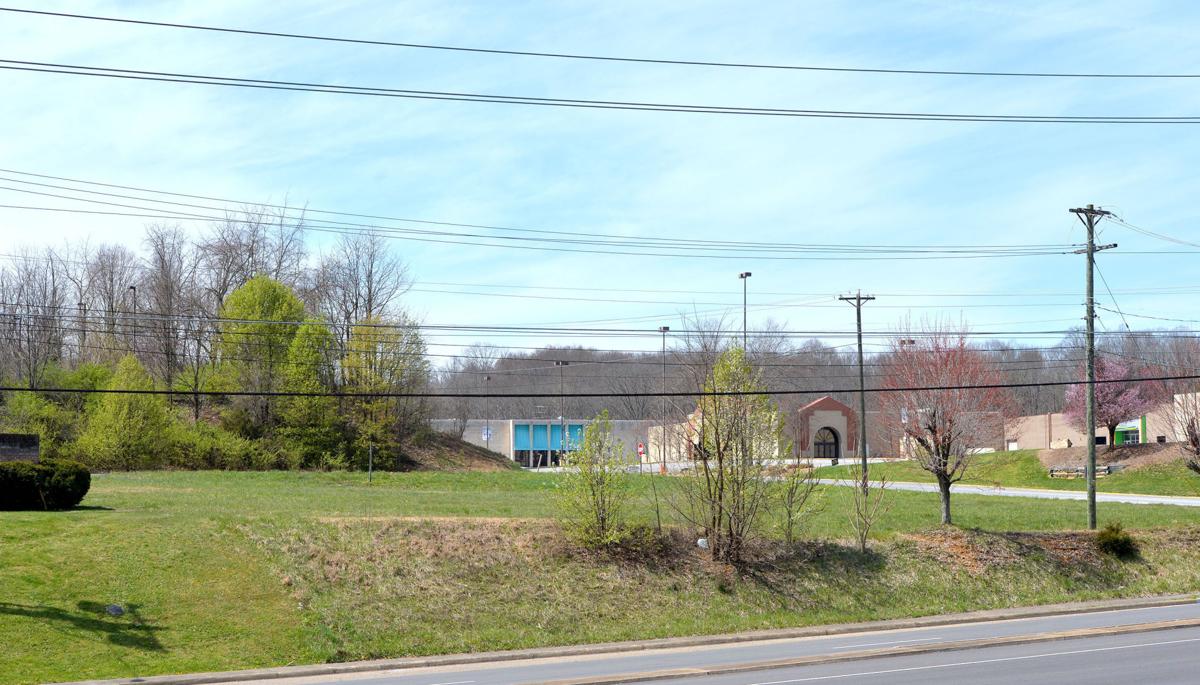 The empty lot in front of the former Bristol Mall was approved as an alternate location for Dharma Pharmaceuticals by the Bristol Virginia Planning Commission on Monday. Dharma still plans to operate in the former J.C. Penney building, shown in the background. 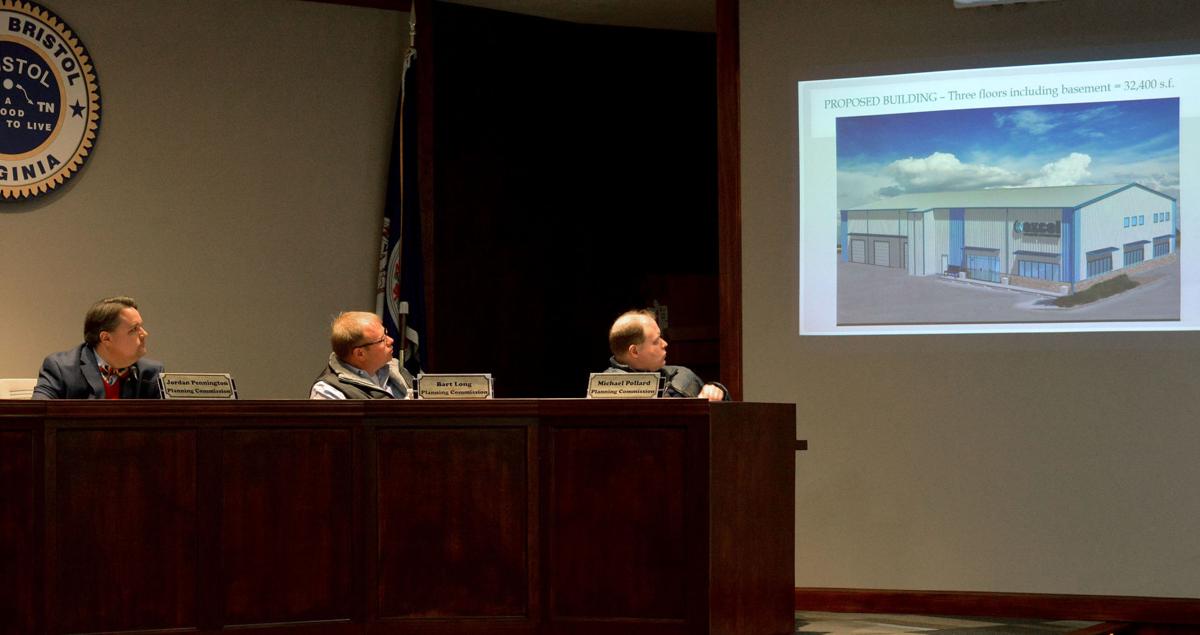 Members of the Bristol Virginia Planning Commission look at a presentation for a proposed special exception for Dharma Pharmaceuticals, which would allow it to move to an empty lot adjacent to the Bristol Mall entrance.

BRISTOL, Va. — Dharma Pharmaceuticals got a green light Monday to pursue the special exception it needs to operate in the Bristol Mall and an alternate site described as a backup plan.

On Monday, the city Planning Commission voted 4-0, with three members absent, to forward two requests to City Council for a public hearing and vote, which are expected at the April 23 meeting.

Dharma filed the first request to operate a pharmaceutical processing facility inside the former J.C. Penney and Eckerd Drug locations at the vacant Bristol Mall.

Par Ventures, the mall owners and investors in Dharma, filed the second request to allow Dharma’s operations to occur at a vacant 1.1-acre Gate City Highway lot. In either case, an exception is required for the startup company to produce its products since both sites are zoned for general business, not manufacturing. The request is not a rezoning.

Dharma is one of five firms across the state approved by the Virginia Board of Pharmacy to legally grow cannabis, extract the CBD and THC-A oils for use in medicinal products and distribute those products to Virginia residents who have special permission from the state.

Sam Blankenship, who is an investor in Dharma, said the commission’s action is appreciated.

Dharma received its approval last December for a site inside the Bristol Mall. The firm and the city unsuccessfully tried to convince the board to allow it to relocate to another site, since the mall owners in September announced plans to establish the Bristol Resort and Casino at the mall site. That project still depends on the approval of the Virginia General Assembly to allow gaming in the state.

The mall owners later said they would work with Dharma but also purchased an adjoining 1.1-acre site on Gate City Highway.

The first exception is for a portion of the Bristol Mall that includes part of the former J.C. Penney location and the former Eckerd Drug. The 40,000-square-foot location would be separated from the rest of the mall with hardened walls, and the outside would be fenced with a guard station to comply with state regulations.

The second exception request is for that adjoining site next to Wendy’s, where Dharma proposes building a 32,400-square-foot, two-story building with a basement and a 30-space parking lot. But that would require going back before the Pharmacy Board and convincing some of its members to change their minds.

“The Pharmacy Board has already approved our site in the mall, with J.C. Penney and Eckerd, and that’s our plan,” Blankenship said, adding the other site is a “backup” plan. “If the casino comes, Dharma is willing to work with the casino and the city. We want the city to do well, we want Dharma to do well. We will work with Par Ventures and the city any way we can.”

Under state regulations, approved processors have a year after approval to complete all requirements, construct a facility that meets all state and local regulations — including zoning — and hire employees.

Both requests will require a public hearing and vote by City Council. Last May, council unanimously approved supporting the Dharma concept. Last year, City Manager Randy Eads and Del. Israel O’Quinn, R-Bristol, unsuccessfully urged the Pharmacy Board to permit the location change due to the proposed casino project.

City Planner Sally Morgan told the commission the staff review had concerns with the shared space.

“Because this building [mall] is being proposed also as a family resort, hotel and casino, there are serious staff concerns about the mix of these two uses under one roof,” according to the city report.

Morgan said the city might suggest conditions at the public hearing.

“The casino is still entirely speculative,” commission member Michael Pollard said during the discussion. “It is contrary to state law, so right now that is no issue.”

The Virginia General Assembly recently approved and the governor signed legislation to conduct a study of casino gaming regulations and established the framework for gaming to begin in 2021, if the legislation is re-enacted during the next session.