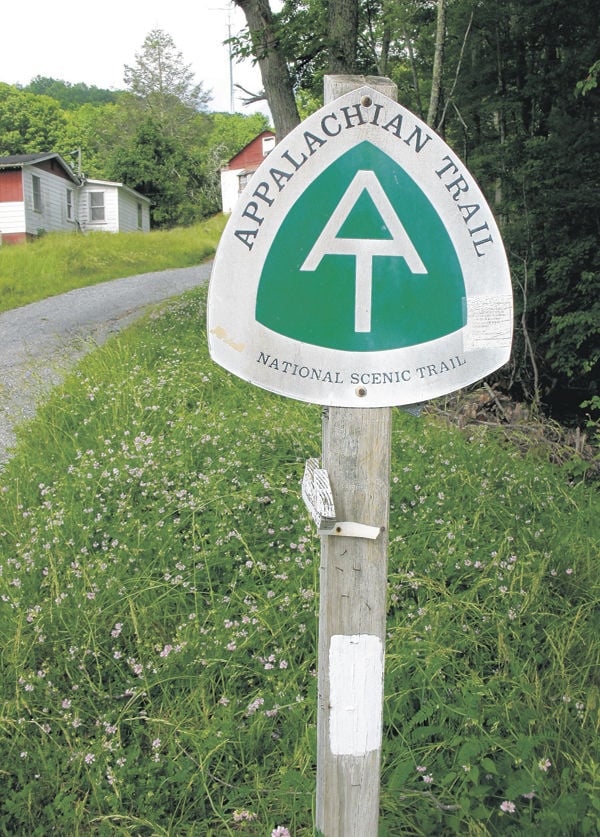 A sign marks the Appalachian Trail through Southwest Virginia. 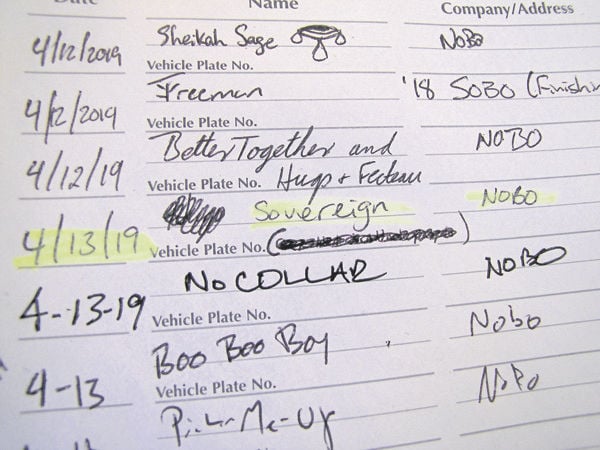 An entry in a logbook in Bland County shows that someone calling themselves "Sovereign" signed in on April 13.

A sign marks the Appalachian Trail through Southwest Virginia.

An entry in a logbook in Bland County shows that someone calling themselves "Sovereign" signed in on April 13.

The close-knit community that travels the Appalachian Trail’s 2,190 miles from Georgia to Maine is in mourning this week in the wake of a deadly attack that left one hiker dead and another seriously injured.

As they wait for the identities of the man who was killed and the woman who was hospitalized to be publicly released, those along the trail were dealing with feelings of hurt, worry and anxiety.

“I think a lot of people are hurting,” said Dustin Rucker. “I know a couple of people who have gone home because of it.”

James Viers, a hiker who goes by the trail name “Genius,” said he is worried about a group of friends he’d met earlier on the trail. Viers said the group was a couple days behind him.

“They would have been in the area about the time it happened.”

Another hiker who passed through Marion on Monday called the incident “unnerving” to those on the trail.

“We’re usually worried about things like bears,” he said. “It’s just so upsetting.”

Rucker, who goes by the trail name “Honest Abe,” was forced to leave the trail in Atkins on Saturday while portions were closed during the investigation. Following the re-opening of the trail, he made it to a Ceres hostel.

Trouble brewed on the AT Friday night, according to a criminal complaint filed Monday morning at the federal courthouse in Abingdon.

FBI Special Agent Micah Childers wrote in the complaint that the victims were half of a group of hikers who had come in contact with 30-year-old James L. Jordan on Friday. He wrote that Jordan approached the hikers on a section of the trail passing through Smyth County.

Childers noted that the group knew of Jordan as a “suspicious person” who had previously been accused of threatening others on the trail farther south. Word had spread about the behavior on social media.

The complaint said that when Jordan approached the group he was acting “disturbed and unstable,” singing and playing a guitar.

Later that evening, after crossing into the short stretch of trail in Wythe County, the group set up camp along the trail. Jordan approached their tents there, Childers wrote, making noises and threatening to “pour gasoline on their tents and burn them to death.”

The group began to pack up and leave the site but before they could go, Jordan approached again, this time with a knife. Two hikers, a husband and wife from New Jersey, ran toward the Bland County line, police said. Jordan gave chase but the couple told law enforcement that they turned off their headlamps and jumped off the trail to lose their pursuer.

The complaint says that Jordan returned to the campsite and briefly argued with a man there – identified Tuesday afternoon as 43-year-old Ronald S. Sanchez of Oklahoma – before stabbing him in the upper part of his body. The woman at the camp ran but soon tired and was chased down by Jordan. Childers wrote that she raised her arms as if to surrender but Jordan began to stab her multiple times. She fell to the ground and pretended to be dead, the complaint said.

When Jordan left the scene of the attack to find his dog – a mixed breed named Ariel, the court document said the woman got up and ran toward the Smyth County section of the trail.

The couple who escaped found their way to Ceres, where they called 911 around 1:30 a.m. The woman told police she only knew their would-be attacker by his trail name, Sovereign. Bland County Deputy S.D. Mullins picked the couple up on Nebo Road in Smyth County near the Bland County line.

Around 2:20 a.m., the International Emergency Response Coordination Center contacted the Wythe County 911 Office about an S.O.S. alarm from Sanchez. According to the Wythe County Sheriff’s Office, the signal came into the center about 40 minutes prior. A message with the signal said that a man with the trail name of “Sovereign” was trying to fight Sanchez.

While running back toward Groseclose in Smyth County, the bloodied woman who had been attacked met up with two other hikers who helped her make the six-mile trek to Davis Hollow, just off Interstate 81’s Exit 54. Once there, she called 911 around 3:15 a.m. She told dispatchers she had been stabbed multiple times by Jordan, who was traveling with a dog. The woman was taken to Bristol Regional Medical Center, where police say she is now in stable condition. The FBI, in a Tuesday release, said that as the attack is still being investigation, the identities of the woman would not be released at this time.

Law enforcement officers from the Virginia State Police and Wythe, Smyth and Bland counties began combing the area, alerting other hikers to the imminent danger.

The S.O.S. message from Sanchez gave officers in Wythe County a general location, and the tactical team from the Sheriff’s Office began a five-mile trek into the woods off of Strawberry Road, the only place in Wythe County where the Appalachian Trail is accessible. Meanwhile, law enforcement officers blocked off the trail entrances in Smyth and Bland counties.

Wythe County Maj. Anthony Cline and Chief Deputy Charles Foster led the team into the Jefferson National Forest, using horse trails at some points to get to the location.

Viers said Bland County deputies woke him up at Ceres’ Bear Garden Hiker Hostel around 5 a.m., alerting him of the danger.

Like many hikers, Viers, was wary of Jordan. He’d seen Jordan on the trail a few times and Jordan was known for his “bizarre behavior,” he said.

“As soon as they made mention of his name, everything made sense.”

Just after 6 a.m., while deputies were speaking with another group of hikers, a dog came running out of the woods. Deputies were able to follow it about 30 yards, finding Jordan and taking him into custody.

Shortly after Jordan’s arrest, police found Sanchez’s body. The phone that sent the S.O.S. alert was close by. Deputies also recovered a knife from the site.

Rucker said he wasn’t surprised that Jordan was the suspect police had been looking for. He’d crossed paths with the man several times during a two-week period in April and described him as unsettling.

“There was just an eerie feeling about him.”

Rucker said Jordan was known to threaten hikers, forcing them to vacate shelters along the path. In a hail storm a few weeks ago, Rucker ducked into a shelter but Jordan’s presence put him on edge.

“We were all on alert to him,” said Jim Ryan, a hiker who goes by “Puck Carrier.”

The hikers said they didn’t believe Jordan was actually traveling the trail so much as hanging out on it, saying he bounced around too much.

Trent’s Grocery in the Hollybrook community of Bland County keeps a logbook for hikers to sign as they pass through. On April 13, that logbook was signed by someone with the trail name “Sovereign.”

Eight days later, Jordan was accused of pulling a knife on some hikers in Hot Springs, North Carolina. Police caught up with him in Unicoi County, Tennessee, the following day – a straight-line distance of around 45 miles.

According to an affidavit filed in Unicoi County, Jordan appeared intoxicated and had to rest on the hood of a deputy’s patrol car when police approached him. He initially gave police a false name and birthday. The deputy searching him found a knife that matched the description of the incident reported in Hot Springs. The deputy also found what appeared to be marijuana and a glass pipe. Jordan was taken into custody on the drug charges, this time giving police his real name and birthday, the affidavit said. He was also charged with criminal impersonation.

According to a Washington Post report, a man met up with Jordan in Roan Mountain, Tennessee, on May 3 and gave him a ride to a bus station in Johnson City, Tennessee. Two days later, Jordan was apparently in Bristol, Tennessee. The owner of a convenience store there told the Bristol Herald Courier that he called the police on a man fitting Jordan’s description who was carrying a guitar and traveling with a dog.

The business owner told the Courier that the man he encountered talked about being in a “special force” and said that he was a “suburban assassin.” He said his target drove a large white truck similar to the one the business owner had parked at a gas pump.

The store owner called 911 and two officers arrived, but after speaking with the man, who they now believe was Jordan, they said there was no reason to detain him.

Eight days later, Jordan, of Yarmouth, Massachusetts, was arrested in Wythe County. Because the attacks happened in the National Forest, the FBI picked up the case, charging Jordan federally with murder and assault with the intent to commit murder.

He made his first appearance in federal court on Monday, where a judge ordered him to undergo a psychiatric evaluation.

Monday morning, Rucker, Viers and Ryan were packing up at the Ceres hostel, ready to get back on the trail.

He said he still felt safer on the trail—even after a slaying— than he would in a place like Chicago, for instance. He pointed out how rare violence is on the trail.

Prior to the weekend attacks, the most recent slaying happened in 2011, when a man was choked to death in Amherst County. One of the most talked-about killings occurred in 1981 near the Bland County store where “Sovereign” signed the guest book last month.

Trent’s is located near the Giles County border where Randall Lee Smith killed two Maine hikers and buried their bodies in shallow graves. Paroled in 1996, Smith was later accused of shooting two fishermen in the same area in 2008.

The latter victims survived but Smith died before he could face trial.

Hikers in Bland on Monday worried that Jordan’s actions will cause communities along the trail to be shy of hikers. They want people to know that Jordan doesn’t represent the hiker community.

“99.99 percent of the people you meet on the trail are nice, honest people,” Viers said. “Don’t be afraid of them.”

The trail, which spans 14 states, attracts millions of people each year. Thousands attempt a through-hike, but only about one in four make it the whole way.

Rucker, Viers and Ryan are headed north, determined to be among the few who make it. They’re ready to put some miles on their boots and hope for life on the trail to return to normal.

Jasmine Dent Franks can be reached at jfranks@wythenews.com. Millie Rothrock and Jeffrey Simmons contributed to this story.